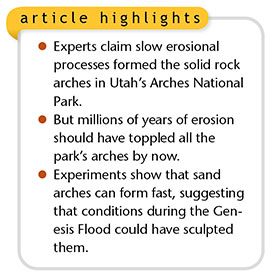 West of the Rocky Mountains in Utah, Arches National Park preserves some 2,000 natural stone arches. Only a handful of them have the grandeur to attract large crowds, and these are glorious! Countless cameras have captured these vaulted and sculpted sandstones, yet seeing them in person demonstrates why mere photos can’t do them justice.

A Rocky Start to the Arches Story 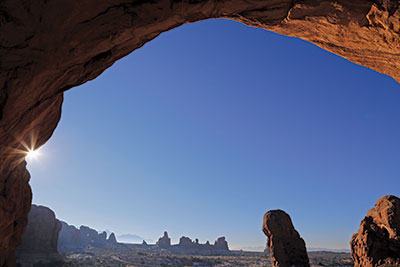 Uplift of the entire region fractured the rocks of the Entrada Sandstone. Erosion has worked on these cracks and formed rows of parallel ridges, or fins. The innumerable grains of sand that comprise the fins are held together by a natural cement. This mortar is dissolved by water trickling down the surface of the rock. Sand grains are loosened, and slowly the wall erodes. Water seeping into the porous rock also dissolves cement inside the rock. If these dissolution processes create a hole through the rock fin, an arch is formed.1

Some parts of that story make sense, but other parts don’t. If entire regions uplifted, then why didn’t erosion leave behind flat plains over eons instead of these dramatic rocky outcrops and arches? And where do we see erosion carving parallel fins?

Yes, natural cements hold some sand grains together in sandstone, but these can form fast today, such as in creek beds that carry mineral-rich waters. Yes, sandstone erodes slowly by rain, but the surfaces below the arches don’t have the enormous piles of sand that eons of today’s rain-based erosion would have left behind. 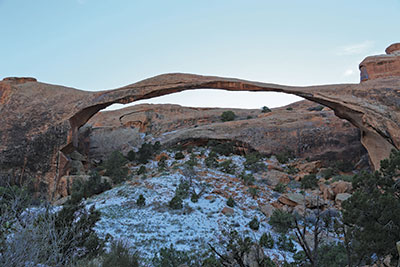 Landscape Arch. The scattered rubble beneath the arch fell in 1991 and in a few prior collapse events. Even at today’s slow collapse rate, arches could not remain aloft for millions of years.
Image credit: Brian Thomas

Erosion happens much faster when whole boulders collapse. A few rock piles are visible—perhaps a few thousand years’ worth—but after millions of years all the pillars and arches should have collapsed and rubble should completely cover even whole cliffsides.2

On the hike to Landscape Arch, a sign explains that some sandstone broke off in 1991. Other rocks fell away in the 1940s. The few scraps of clearly visible rubble from these events still rest below Landscape Arch. The park’s most iconic arch, Delicate Arch, has no rubble at its base. Something swept the ground clean. 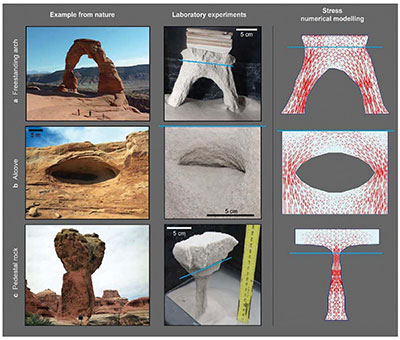 Recent experiments show that the weight of sand, not cement between sand grains, forms arches in mere hours while sand is partially submerged. The blue lines show water level. Also, the land beneath Delicate Arch, shown top left, represents canyons and cliffsides that were swept clean. Where are the piles of sand and rubble from millions of years of erosion?
Image credit: Bruthans et al, Nature Geoscience. Used in accordance with federal copyright (fair use doctrine) law. Usage by ICR does not imply endorsement of copyright holders.

Again, the park book says, “Slowly the wall erodes.”1 It may happen slowly today, but that doesn’t mean it happened slowly in the past. If erosion happened at today’s slow rates for eons, then rubble and sand grains should fill the valleys. Where is the rubble from evolution’s eons? Perhaps a colossal power washer removed the sedimentary layers that once connected now-separate mountainsides.

Making Arches in a Lab

Recent research makes up the second key observation. Scientists weighted the top of a block of sand that was wet enough to hold together but not cemented into stone.3 They raised the water level around the sand block. As sand fell away under different setups, pillars, alcoves, and arches formed fast. These experiments refute the park book’s statement that “if these dissolution processes create a hole through the rock fin, an arch is formed.”1

It happened in minutes when the sand was partly submerged, not over eons of rain. The researchers discovered that sand grains lock together when under pressure. They visited Landscape Arch after their experiments and noticed that the rubble “completely disintegrated” after it fell.4 Without pressure from overlying rock, the once-hard sandstone rapidly turned to sand. No cement, no rain, and no eons. 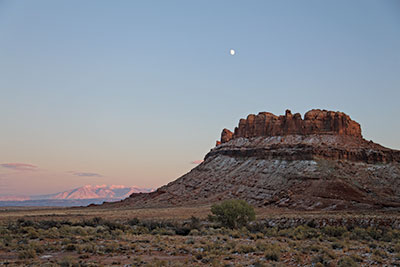 Mesas and valleys. The sun sets on a pillared mesa just west of Utah’s Arches National Park. During the Flood, floodwater levels lowered while the whole region uplifted from beneath. These receding waters flushed strata toward today’s oceans, leaving behind erosional remnants like mesas and arches.
Image credit: Brian Thomas

Gigantic arches and alcoves imply that Utah once lay beneath deep water. The Bible tells us the Flood covered all the earth—that includes Utah. But as the floodwaters lowered, massive crustal movements lifted land upward. This force fractured sandstones into parallel fins. While still partially submerged, the weight of strata above the Entrada Sandstone solidified sand into arches, pillars, and mesas. Descending waters flushed sand and debris toward the seas. When the Flood’s water levels dropped enough to start carving channels instead of overtopping the whole landscape, they left behind buttes, valleys, alcoves, and arches as sculptures from the Flood.