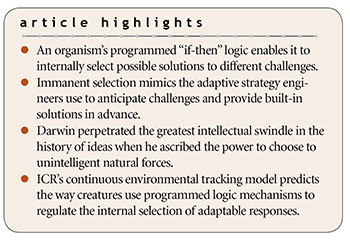 Crime dramas tend to involve several potential suspects. Some suspects have a good motive to commit the crime but also a good alibi. Viewers presented with the exact same details can develop different theories about the culprit, and at some point one onlooker might blurt out “who done it” while another says, “Don’t tell me!” Often the climax arrives when a brilliant detective or defense attorney not only proves why their client didn’t commit the crime but why another person—usually seated in the room for dramatic effect—was the real culprit. It isn’t enough to prove who didn’t do it; viewers want to know what actually happened.

In a similar fashion, researchers could have very different interpretations for a common observation in adaptation-related mysteries. When a population of organisms is exposed to changing conditions, quite often we find that over time some adapt to live in a new environment. What seems to have happened is a non-random—indeed, preferential—sorting of some of the original members (and their offspring) whose traits are highly suited to the new environment. Researchers face two equally important questions: “What mechanisms enabled the original population to diversify,” and “How do we explain the preferential sorting of organisms?” 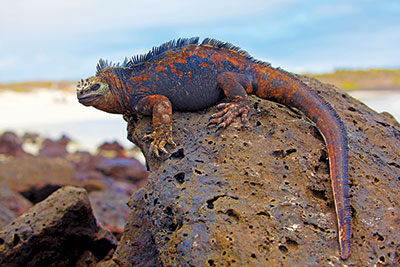 A potential explanation is blind chance or luck. But the preferential sorting of organisms with certain traits that match changed conditions is often predictable.1 This fact, coupled with evidence from population statistics,2 indicates that chance is an unlikely explanation for most sorting events.

Physicists could provide another explanation. Some might claim that physical forces can cause sorting similar to the way dynamic fluid environments use phenomena like momentum and drag to sort suspended particles with different traits into different zones. But physics alone doesn’t seem enough for the preferential sorting of creatures.

A theologian might say God selects each organism to live at a particular time and environment of His choosing in order to accomplish a specific purpose. Scientists who believe in the sovereignty of God and His active involvement with His creation could readily agree with this. But they would be hard-pressed to devise a scientific test or device that measures God’s activity.

Nevertheless, the theological explanation makes intuitive sense since it explains preferential sorting by the means familiar to everyone—an intelligent agent. Not surprisingly, even those who promote evolution or intelligent design use some manifestation of volition to explain preferential sorting. For example, when a fish with normal eyes is observed living in an open stream but its blind cousin resides in a cave, the question arises: Did a volition-based selection preferentially sort out these fish to the appropriate environment?

Yes, it did, but not the non-identifiable “selection event” that evolutionists attribute to unconscious nature. That’s what didn’t happen in this mystery. What did was an identifiable selective activity in fish embryos. In a bona fide selection between the “on” or “off” mechanisms regulated by logic-based information, “control switches” for eye development were turned off in the blind fish.3

ICR’s article series Darwin’s Sacred Imposter covered a few reasons why we should reject attributing volition to nature. But first, let’s consider a more precise way to express how certain traits may be truly selected to fit specific environments. 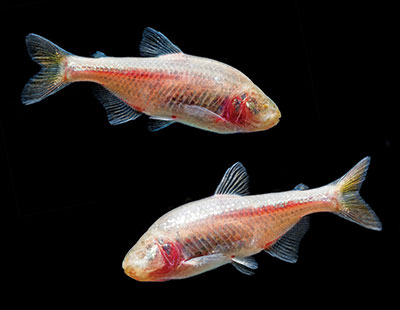 The most recent articles in the Engineered Adaptability series described an indispensable element of tracking systems (together with sensors), which is logic mechanisms.4 We found that an organism’s programmed “if-then” logic enables an internal selection of the correct solutions to different challenges. When specific conditions are detected, the adaptive response is a particular and necessary consequence of these complicated, logic-based systems.

There appears to be a link to real volition. An organism’s logical programming carries out the conscious logical intentions of an intelligent agent—the organism’s programmer. Thus, what we observe in nature are biased responses that result in the preferential sorting of creatures with different traits that fit different environments.

From an engineering standpoint, if organisms are going to live in ever-changing environments, they need an adaptable design. Creatures use an array of mechanisms to continuously track environmental changes. One fascinating aspect of innate self-adjusting mechanisms appears to be a programmed “strategy” for adaptation that corresponds in function to programs that human engineers produce.

Engineers try to anticipate every challenge their designed entity will encounter so they can engineer specified solutions that precede the challenge. The predictive plan that engineers develop is called an adaptive strategy. The inherent selectivity of “if-then” logic mechanisms is integral to implementing a strategy. When engineers write specifications, they select one component or process over another. Thus, specificity is linked to an intelligence-based selectivity.

Take the Galapagos marine iguana. It’s heralded as an evolutionary example of “selective pressures” over time adapting mainland iguanas for life in the sea. One evolutionist envisions that certain “favored” genetic mutations coupled with the struggle to survive have “modified a different cranial exocrine gland to serve as a salt-excreting gland.”6

But in reality, the same author explains that many mainland and all marine iguanas already possess sodium and potassium secretion glands. In fact, the salt secretion rate and composition and concentration of the secreted fluid are usually rapidly and repeatedly self-adjusted by marine and mainland iguanas when salt is orally ingested or water with dissolved salt is introduced intravenously. This suggests an internal salinity sensor and innate programming that selects the appropriate response, and thus “the ability to modify the composition of the secreted fluid may give animals flexibility in acclimating or adapting to changes in dietary salinity.”6

Immanent selection is also evident in the inherent selectivity of the membranes that regulate the internal access of an organism’s cells. As one report astutely put it, “A cell that cannot control what comes in or leaves its interior cannot survive.”7 That same selectivity is seen in an organism’s sensors for specific molecules. These exist in abundance within another selective barrier called epithelium, or skin.8 Remarkably, selective control of biochemical reactions has also been observed in intracellular zones that are delimited by the characteristics of specific protein combinations. One report states:

These protein-based liquid globules, called membraneless organelles, selectively permit entry of enzymes and substrates to carry out various cellular functions that would be less efficient or not possible at all in the cytoplasm.9

As noted earlier, an internal selective activity happens that shuts down eye development in certain fish embryos—but enhances development of other senses—so that these fish can pioneer into caves. In other words, creatures are active, problem-solving entities that take on environmental challenges and continuously fill different niches.

But as we saw in a previous article in this series, Darwin revolutionized how biology views organisms by mischaracterizing them as “passive modeling clay” that is shaped by nature over long periods of time.10 Intelligent design advocate William Dembski explains how Darwin illegitimately projected selective capacity onto nature and deflected it from the designed specificity within organisms.

In short, evolutionary biology needs a designer substitute to coordinate the incidental changes that hereditary transmission passes from one generation to the next, and there’s only one naturalistic candidate on the table, to wit, natural selection....Before Darwin, the ability to choose was largely confined to designing intelligences, that is, to conscious agents that could reflect deliberatively on the possible consequences of their choices. Darwin’s claim to fame was to argue that natural forces, lacking any purposiveness or prevision of future possibilities, likewise have the power to choose via natural selection. In ascribing the power to choose to unintelligent natural forces, Darwin perpetrated the greatest intellectual swindle in the history of ideas.11

Though selectionists today routinely project selective abilities onto inanimate natural forces, before Darwin that was not the case, as Dembski observed. Evolutionist M. Hodge confirms “that no one would easily or inadvertently slip into talking of nature as a realm where anything like selection was located; and, indeed, we find few authors before Darwin making that transition.”12

Engineers neither project non-quantifiable powers onto nature, nor do they assert that a problem can somehow “select” its solution. Engineers recognize that solutions either solve a problem or they don’t. In fact, projection of power onto a statue, a rabbit’s foot, or even nature is a spiritual issue.

The intrinsic spiritual problem with natural selection has been derided by non-theist observers from the outset. Back in 1861, the Perpetual Secretary of the French Academy of Sciences described Darwin’s Origin of Species as “metaphysical jargon thrown amiss in the natural history,” “pretentious and empty language!” and “puerile [silly] and supernatural personifications!” and said that Darwin “imagines afterwards that this power of selecting which he gives to Nature is similar to the power of man.”13

Darwin needed a substitute designer. He succeeded by cleverly personifying nature and projecting onto it the God-like capability of exercising an agency to “favor” organisms via some mystical volition. Few evolutionists themselves understand that the imaginary notion that “nature selects” transfers real agency from creatures to the environment. But some do realize it, and one complains, “Evolutionary biologists routinely speak of natural selection as if it were an agent.”14 But then again, he notes:

Many evolutionary biologists, in fact, assure us that the idea of a selecting agent is “only a metaphor”—even as they themselves succumb to the compelling force of the metaphor….And so we are to believe that natural selection, which “is not an agent, except metaphorically”, manages to design artifacts; and the organism…is not, after all, a creative or originating agent itself. Its [the organism’s] agency has been transferred to an abstraction [natural selection] whose causal agency or “force” is, amid intellectual confusion, both denied and universally implied by biologists. Natural selection becomes rather like an occult Power of the pre-scientific age.14

But even more than that, CET hypothesizes what does happen. It predicts that organisms track environmental changes using elements that correspond to those found in human tracking systems. Research shows that creatures not only have such elements, they do, in fact, use them to track changing conditions. CET expects a type of immanent selection through the selective nature of “if-then” logic—an internal selection during development (and afterward) of pathways that express traits suitable to specific conditions.

Organisms are not passive modeling clay.

Therefore, organisms are not passive modeling clay. They are instead active, problem-solving entities that solve challenges and fill new niches…just as the Lord Jesus designed and purposed them to do.