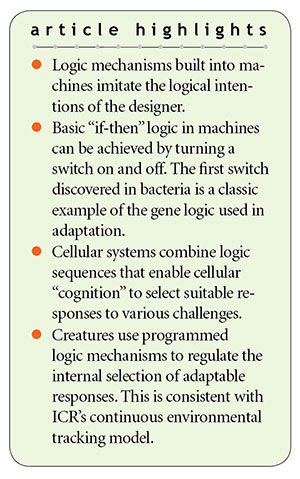 “It’s only logical” was the statement frequently made by the Vulcan character Spock in the Star Trek series. His logic-based decisions during times of crisis stood in stark contrast to the emotion-driven reactions of the humans around him and made him a pop culture icon. Suddenly, being logical was “cool.”

Logic involves the study and practice of correct reasoning, which usually applies rules to guide people’s thinking as they move from basic beliefs or premises to conclusions. Thus, logic is regularly used to select the right course of action when a decision is needed. Figuring out a logical path in Spock-like fashion and putting it into action can be very rewarding. More challenging yet is finding a way to program something with the logic it needs to identify the best solutions to the difficulties it might encounter.

Observations from the latest research keep coming in to support ICR’s CET model.

When faced with different challenges, machines need the logic-based capability to select appropriate responses from the potential solutions. Engineers and programmers accomplish this by building logic mechanisms that imitate the conscious logical intentions of the designer. The only known originating source of such information is a real mind.

For early programmers, the challenge was how to program a machine so it could manipulate incoming data in a way that mirrored how a human reasons. Programmers need to write a program in a type of language the machine can use. The program is governed by rules, just like all languages. It uses logic-derived conditional statements, including “if,” “then,” “and,” “or,” and “not,” to regulate data in a step-by-step manner that creatively combines these conditional statements and other commands. The program is intended to mimic the way the human mind confers meaning to data to obtain the information it needs to make a decision.

When people think of the simplest logic, they usually think of something like “If condition X, then perform one kind of response, and if condition Y, then do another.” This type of logic is fundamental for the operation of nearly all electronic computing devices. In many machines, it can be implemented by turning a basic switch on and off. For instance, if the switch is “on” then do “A” and if it is “off” do “B.” Could living creatures use this type of programming to self-adjust to changing conditions?

Creatures appear to respond to changes in their environments by making suitable self-adjustments generated by their own built-in biological mechanisms. The Institute for Creation Research is developing a theory of design whose main assumption is that engineering principles can be used to explain biological functions. From this, we are building a design-based adaptation model called continuous environmental tracking (CET). When it comes to the biological function of adaptability, ICR’s model hypothesizes that if human engineers can use a tracking system to detect and maintain surveillance of a moving target, then creatures could employ a similar strategy to track and adapt to changing conditions. Human-engineered tracking systems incorporate three well-matched elements: input sensors, programmed logic mechanisms to regulate an internal selection of adaptable responses, and output “actuators” to execute responses.

Engineering principles also apply to the programming of the logic mechanisms underlying biological functions. Creatures use these mechanisms to control their self-adjustments through a series of internal on-and-off switches. Hard metallic transistors can function as switches in electronics, but in living cells switches are made from extraordinarily complex pathways and interactions utilizing highly specified protein molecules.

Researchers’ careful observation of E. coli bacteria in the 1960s gave clues to how these protein switches operate. Normally, the bacteria in the study would break down the sugar glucose for energy. But when glucose was withheld and another sugar, lactose, was introduced, the bacteria started making the necessary enzymes to metabolize lactose. Analysis of this phenomenon revealed a system consisting of a sensor for lactose, an internal logic-based selection mechanism for “glucose or lactose,” and output responses to produce the suitable enzyme to break down lactose.

Somehow, the bacterium senses the presence of lactose and is induced to make the right enzyme when it is needed. How can such a simple cell “know” what enzymes to make? How is the right enzyme induced by the appearance of the very compound it breaks down? The answers to these questions were worked out by François Jacob and Jacques Monod, who along with André Lwoff shared the Nobel Prize in 1965 for their discoveries….

What Jacob and Monod figured out is that the production of this enzyme is controlled by a switch that resides at the betagalactosidase gene. The switch is off when lactose is absent, but flips on when lactose is present….The control of enzyme production by the lac repressor is the classic example of gene logic, where a gene is used only when it is needed….I cannot overstate the conceptual impact of the discovery of genetic switches in bacteria.3

These bacteria are likely no more aware of these automated functions than humans are of those happening within themselves. Yet, they function just like human-designed autonomous adaptable entities that use internal logic-based selective responses. “If-then” logic enables an internal selection of the correct solution to different challenges, an innate system that closely imitates the conscious logical intentions of a designer.

In conscious organisms, the ability to make selections is either an indicator of volition or a consequence of complicated, logic-based systems. When such organisms integrate sensory inputs, memory, and logical rules to make selections, they are said to express cognition. Remarkably, an individual cell—including those that organisms use in their environmental tracking systems—seems to behave in ways that mimic cognition. Geneticist James Shapiro of the University of Chicago describes this capability:

Cells act in what I call a cognitive way or an information processing way. Some people like to say “computational.” The only reason that I don’t use the word computational is that it doesn’t include the sensory aspect of how cells operate. And the sensing and its molecular basis are all very firmly established scientifically. There’s no question about it. What we don’t understand is how everything is integrated, how the information is processed and how the cells end up doing the appropriate thing. We know a lot about the components involved in signal transfer and decision-making, but we don’t know how the whole system works. That I think is the key frontier in the 21st century….Cells engineer their own genomes and they do it in a wide variety of ways that are subject to sensory inputs and which can be targeted within the genome.4

Thus, it seems that tracking environmental changes is a function of organisms, some organ systems, and even cells themselves. It also looks as though the same elements of sensors, logic mechanisms, and output effectors are used in similar systems all the way down. Observations from the latest research keep coming in to support ICR’s CET model. Sensors bridge the space between organism and environment and are themselves marvels of engineering. But the logic mechanisms—which are designed to mimic the way cognitive beings think and implement suitable selections—seem to resist any explanations involving death-driven, mindless, and random evolutionary trial-and-error scenarios.

We get a glimpse into the magnificent and infinite mind of their Designer, the Lord Jesus Christ.

Programmers use logic-based programming when they want to implement their decision-making intentions through an independent entity. So, when we see microscopic cells carry out thousands of highly complicated logical decisions with exquisite precision, we get a glimpse into the magnificent and infinite mind of their Designer, the Lord Jesus Christ.