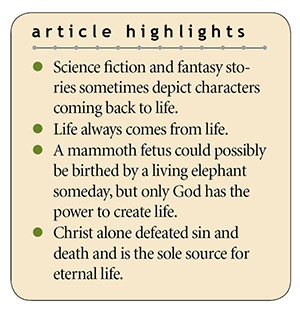 In the 2013 movie Star Trek: Into Darkness, Captain Kirk suffers lethal levels of radiation to save his crew. Fortunately, Doctor McCoy brings his captain back to life by borrowing blood from a character whose body regenerates tissues. In the more recent Jurassic World movies, scientists use protein and DNA sequences from dinosaur remains to create new dinosaurs such as Indominus rex in the lab. Shows like these reveal humans’ interest in outwitting death and leave the impression that perhaps someday science can bring forth life. However, real-world features wreck these science fiction fantasies.

The idea that science can solve any problem flows from humanism. This teaches that humans are the pinnacle of evolution and can create better futures and develop technologies to rescue us from all harm. Humanists seem to want the benefit of everlasting life without having to turn to God.

But science can’t solve every problem. Technologies can help improve health, but they fizzle when it’s time for an animal or a person to die. Scientists may measure brain waves, and doctors can perform incredible medical procedures, but they are powerless to reverse death. Science can’t bring animals or people back from the dead.

We do see new life—actually a continuation of life—when a baby is born. Science-based tools may help with fertilization or the birthing process, but no science has ever created life from scratch. Life always comes from life. Biologists once taught this basic principle, called the Law of Biogenesis, before education leaders chose to bathe public school science in humanism.1

Since life always comes from life, then the first life must also have come from life. It did. The living God breathed life into specially crafted dust to make the first man, Adam. God then formed Eve out of Adam’s living body. Humanists don’t like God, so they substitute things like dirt, pond water, or laboratories for His life-giving skill.

Even if scientists had a complete and pristine copy of Tyrannosaurus DNA, what could they do with it? They would have to insert it into an egg to resurrect that dinosaur. But those eggs are gone. Even a fertilized egg still needs a whole T. rex mother to properly mature it.

DNA holds information, but it does not hold life any more than a printed recipe can bake a cake. It takes a chef to interpret the recipe. It takes an egg cell to interpret DNA. In short, it takes a mama to make a baby.

This fact gives some scientists hope to resurrect a mammoth. If they can find or make the right DNA, they might insert it into a live elephant mother. It’s a long shot but not total fiction like Captain Kirk or Indominus rex.

God, not science, deserves the credit for giving all people a desire to live after death and for supplying His Son Jesus as the only way to fulfill that desire.

The original Creator remains the only one who could bring back dodo birds or dinosaurs. This Creator left good news for those who like the idea of living forever. Anyone anywhere who believes—“whoever desires”2—can turn from sin and trust in the One who rose from the dead to forgive those offenses. Then in addition to forgiveness, “whoever believes in Him [shall] not perish but have everlasting life.”3 God, not science, deserves the credit for giving all people including humanists a desire to live after death and for supplying His Son Jesus as the only way to fulfill that desire.4