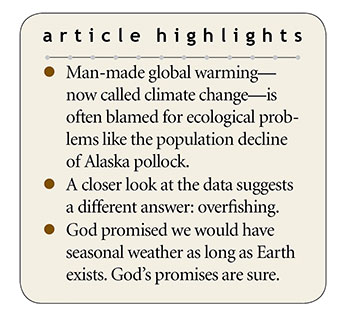 But recently God’s promise has been distrusted, doubted, and denied by many who assert that human activities are so out of control we should fear the loss of previously stable climate patterns. In effect, these alarmists ignore God’s promise and His sovereign control, as if humans can determine the destiny of Earth’s climate.

But what if government reports support notions of man-made global warming and an upcoming climate crisis? Would that prove God has lost His stabilizing grip on Earth’s environmental parameters? Consider the Alaska pollock, the cod-like whitefish some say is now the number one money finfish in America’s food industry. Huge pollock populations once filled certain areas of the Bering Sea and North Pacific, but the southern edge of their range is shrinking. Some suggest the pollocks are migrating north due to climate change.2 Is this the case?

We expect fish stocks to naturally fluctuate with changes in climate [such as when Baltic herring relocated about A.D. 1300 as the Medieval Warm Period transitioned into the Little Ice Age]. Usually, during periods of warming or cooling, fish stocks residing at the polar ends of the population’s range increase or decrease accordingly, while the reverse happens at the other end.2

If huge populations of Alaska pollock relocate north or south, that migration’s cause is a big deal—not just for the food industry but also because global warming advocacy is a billion-dollar industry. Government-funded research projects often depend upon climate change theories.2 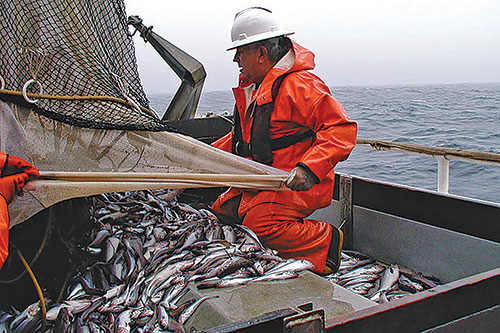 Pollock are sorted on board the NOAA ship Miller Freeman during a 2007 assessment.
Image credit: Copyright © 2007. I. Spies. Alaska Fisheries Science Center. Used in accordance with federal copyright (fair use doctrine) law. Usage by ICR does not imply endorsement of copyright holder.

However, government databases are not immune to error. Scientific analyses cannot have stronger validity than their underlying data. Misinformation can multiply when filtered through multiple users. Database errors accrue and snowball, infecting and proliferating into multi-generational “viral” outcomes, due in part to “veneer review” and statistics-distorting cherry-picking.2-4 When billions of dollars hang in the balance, both scientific research (i.e., observing and collecting data) and scientific analysis (i.e., sorting and interpreting data) are vulnerable to compromise and corruption.2,4

Government databases on the fishing industry rely on at-sea reporting that includes inspector monitoring of fishing quotas.2 However, the information the inspectors collect can be unreliable.

We discovered that our estimates [of the total catch tonnage] were about double the catches reported to us. All signs pointed to tampering of the scales.…The catcher boats now delivered [at different places] and at all hours. Previously they had delivered to one main site on the [mothership] deck and only during daylight hours.5

Should further research, farther north, be looked at to see if climate change is really causing the pollock population to migrate northward? Could it be the cause-and-effect reality is embarrassingly simple and overlooked6 as evolutionists rush to blame global warming for yet another ecosystem alteration?

In the case of pollock, several stocks at either end of their range in the north Pacific Ocean have decreased recently, leading to suspicion of overfishing as the primary cause for the population decreases.2

Despite what popular science purports to show, we can rely on God’s Word.

This is but one example of how careful fact-finding refutes global warming alarmism, corroborating God’s promise in Genesis 8:22. Despite what popular science purports to show, we can rely on God’s Word.

More Technical Papers
Rightly 'Dividing' the Word about Peleg
Was earth’s unusual “division” in Peleg’s lifetime a linguistic event or a geological event? by John D. Morris, Ph.D., and James...
BY:  VARIOUS AUTHORS
A Proposed Mesoscale Simulation of Precipitation in Yos.,.
In A. A. Snelling (Ed.) (2008). Proceedings of the Sixth International Conference on Creationism (pp. 307–319). Pittsburgh, PA: Creation Science...
BY: LARRY VARDIMAN, PH.D.
Hypercanes Following the Genesis Flood
Presented at the Fifth International Conference on Creationism, Pittsburgh, Pennsylvania, August 4–9, 2003. Published in: Proceedings of the Fifth...
BY: LARRY VARDIMAN, PH.D.
The Latest
NEWS   ACTS & FACTS   PODCASTS