We share the world with modern pagans who worship the sun—or idolize an imagined primordial Big Bang—so we need to be truth witnesses unto a world drowning in deception and delusion. Ancient paganism is not as dead as we might think. The old paganism still has followers in today’s world. “At the Summer Solstice Pagans honour the incredible strength of the sun and the divine powers that create life.”1

However, promoting biblical creation apologetics is needful nowadays for more reasons than just evangelizing neo-pagans. Although most moderns don’t try to idolatrously shift Christ’s creatorship glory to Thor or Odin, “that doesn’t mean that another group of modern pagans has escaped similar myths” that animistically personify forces of nature.2

Anyone who says that natural elements like fire and ice and rain and stone can create and “select” and “favor” some animals over others, or some humans over others, is not far from the magical myths of the ancient Teutons.2

In previous years—especially in articles by Dr. Randy Guliuzza —ICR has alerted Acts & Facts readers to how nature is insidiously and idolatrously credited with inventing itself, cheating Christ out of credit that He deserves as Maker of heaven, Earth, and all living creatures.3,4

Some pretend to honor Christ by attaching His name to evolutionary theories, suggesting that “evolution is okay for Christians so long as God gets credit for evolution.” But theistic evolution, like atheistic evolution, is still evolution. A pig with a golden snout-ring is still a pig (Proverbs 11:22).

And theistic idolatry is still idolatry—even if promoted by a popular religious leader such as Aaron, who once fashioned a golden calf idol (Exodus 32:1-4).

Then they said, “This is your god, O Israel, that brought you out of the land of Egypt!” So when Aaron saw it, he built an altar before it. And Aaron made a proclamation and said, “Tomorrow is a feast to the LORD.” Then they rose early on the next day, offered burnt offerings, and brought peace offerings; and the people sat down to eat and drink, and rose up to play. (Exodus 32:5-6) 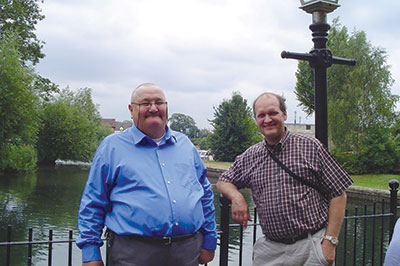 Accordingly, providing clear teaching on origins is a large part of what ICR’s School of Biblical Apologetics (SOBA) has done since 2009, aiming at four types of truth transmission:

Corroborating Scripture with supportive creation apologetics evidences can encourage Christians to remember how amazingly authoritative and relevant the Bible is on every topic it touches. Likewise, refuting unbiblical teachings is a major goal in all SOBA programs. Here are testimonies from SOBA graduates.

I had done my first year of college at a local Christian university. I was very frustrated and disheartened at how teaching the Bible was not very important there, and often compromised with unbiblical ideas. I was honestly thinking about quitting college altogether, until I found SOBA. (Rachel Dallow, M.C.Ed. graduate)

ICR’s SOBA program is unique, providing a solid apologetic foundation not only in theology, but in aspects of history, biology, astronomy, etc. I appreciated the self-paced nature of the courses and the quick feedback from the ICR teachers.…As a teacher, I have been able to bring to the classroom my deepened knowledge of vital topics such as the reliability of the Bible and evidence of design. It has been amazing to see my students connect with truth and pick up on what we call the “magic” words often used in evolutionary descriptions….“We will…tell to the coming generation the glorious deeds of the Lord, and His might, and the wonders that He has done….So that they should set their hope in God and not forget the works of God, but keep His commandments.” (April Rohland, M.C.Ed. graduate, quoting Psalm 78:4, 7)

On confusing topics—such as how (and why) secular scientists’ teachings often clash with Scripture—there is often a truckload of Bible-affirming evidences. Sometimes, they are “hidden in plain view” and should be shared and explained.

Even though I had lifelong learning from a faithful pastor, and had earned a degree from seminary, ICR opened my eyes to a realm of apologetics that I had never considered.…As an itinerant preacher and evangelist, it is common for me to introduce pastors and congregations to the apologetic methods and truths learned from ICR. (Randy Keener, B.C.Ed. graduate)

Yet as the apostle Peter noted (in 1 Peter 3:15), “sanctifying the Lord God” in our hearts—not just how we interact with humans—is the highest motive for serving in apologetics ministry.6 Dr. Jack Weitzel, graduate of SOBA, says,

I’m a retired General Surgeon of 30 years.…At a crossroads I happened to open my copy of Acts & Facts and found on the inside cover an advertisement for SOBA. It was the first and last time I ever saw that advertisement. I signed up for a Master’s Degree in Christian Education and Apologetics.…It was the most arduous degree I have received…I have kept everything related to the degree.…I am now disabled due to the radiation effects of tonsil cancer. I have been left with a feeding tube even before my experience at SOBA. The beauty of [SOBA’s online M.C.Ed. program] was that I didn’t have to leave my home to further pursue my education for the Lord.

After learning the truths of God’s Word—which make sense of His providential works in creation—the logical response is to reverently glorify Him, and joyfully thank Him, for being so worship-worthy, wise, and wonderful.6,7