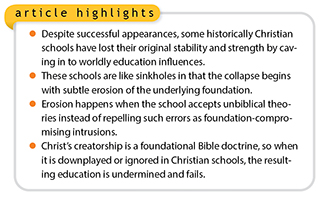 The sudden falling of some Christian schools can be compared to tiankengs, the geological term used for sinkholes that are at least 300 feet deep.1,2 Smaller sinkholes are more common, such as those found in karst-limestone-dominated lands, such as the cenotes that permeate the cavernous areas of Mexico’s Yucatan Peninsula.3 America has its own sinkhole regions in Florida, Georgia, Wisconsin, Missouri, and regions bordering the Chesapeake Bay.3

What is a sinkhole, geologically speaking?

A sinkhole is an area of ground that has no natural external surface drainage—when it rains, all of the water stays inside the sinkhole and typically drains into the subsurface.…Typically, sinkholes form so slowly that little change is seen in one’s lifetime, but they can form suddenly when a collapse occurs.…Sinkholes form in what geologists call “karst terrain”…a region where the bedrock [usually limestone, dolomite, or gypsum] can be dissolved by ground water.3

As we examine nature closely, parallels can be found between what we observe physically and what we observe spiritually (Matthew 7:24-27). Recently, one ICR scientist met with leaders of a well-known Christian education institution. In previous generations, this prestigious seminary was famous for training men and women in God’s truth and equipping them to serve Him responsibly all over the world.2 Although the number of students at this school has grown impressively over recent decades, the school’s distinctively Christian educational quality has diminished just as noticeably.

Sadly, that school is now compromised theologically, socially, and academically. It flies a flag of Bible-based Christian education, yet its programs now deliver predominantly worldly wisdom (1 Corinthians 3:19-20). Its educational courses focus on the academic equivalent of what C. S. Lewis called “being like [secular] folks.”4

Institutional scandals—unbefitting any Christian school—have become so common that they no longer are reported as news. What caused this downward trend? In other words, how did the once standing-tall-for-Christ school drop deeply into a sinkhole?

Like disintegrating soft limestone, unseen, the underlying foundation of the above-noted school’s teaching eroded away gradually, without anybody noticing.2 The school’s trust in the Word of God was slowly dissolved, being washed away by contra-biblical compromises here and there, often failing to affirm and adhere to the authority and relevance of Genesis (John 5:44-47).

Christian schools need to teach God’s truth—and real truth is recognized with certainty when it’s grounded on the specific teachings of Scripture (John 17:17). The Bible must be the bedrock foundation for all informational instruction,2 and the often-neglected creation account is a Bible basic. Christ’s role and actions as Creator must be taught alongside His identity as the death-conquering Son of God.

When that scriptural foundation disappears, unseen by those who only view surface activities, what will happen? When we examine the foundations of biblical education, earth science provides us with a helpful lesson: if accumulating subsurface dissolution isn’t remedied in time, the ground above will soon cave in, its weight falling in upon an eroded foundation, leaving a sinkhole of hazardous wreckage.