Iapetus: Youth in Black and White | The Institute for Creation Research
Skip to main content

On the outskirts of the Saturn entourage flies one of the strangest objects in the solar system. Nothing else is quite like it: a large moon that is jet black on one side, and snowy white on the other. It was named Iapetus in 1671 by Jean-Dominique Cassini,1 who quickly noticed its varying brightness. His namesake, the Cassini spacecraft, visited the moon 336 years later in hopes of determining the reason once for all. It seems to have found the truth to be youth.

The question was whether the dark material was endogenic (erupting from inside) or exogenic (deposited from outside). The two leading theories competed for decades. Like many orbiting bodies (including earth's moon), Iapetus keeps one face aligned with the planet throughout its orbit. Since outlying Phoebe is dark-colored, it seemed likely that the leading hemisphere had swept up material splattered off of Phoebe or other outer moons. Voyager 2 was to settle the debate in 1981. It didn't. The view from 680,000 miles was not good enough. That's why late last year, some of the same scientists (now 26 years older) could hardly wait for Cassini to skim over this moon at under 1,000 miles away. What it found on September 10, 2007, surpassed the word "bizarre." 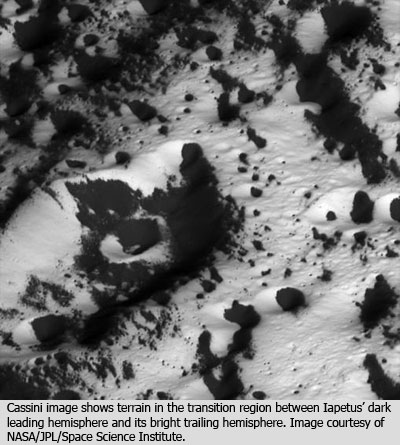 The images left scientists and the public in awe. Dark-and-light boundaries were crisp and sharp, like spots on a Dalmatian dog--no shades of gray were found. Some craters had dark material only on their floors. Whatever it was, the dark material was shallow; new impactors were able to pierce through it and leave a splatter of bright rays. Because it appears to lie on top of the bedrock ice, scientists are leaning toward the exogenic theory. But the stark boundaries suggested a surprising, dynamic process: the ice, warmed by the sun more in the dark region, sublimates and migrates to colder parts of the moon. This segregates the dark and light material and increases the contrast.

Finding carbon dioxide (CO2) on the surface was a surprise, since it is so volatile.2 In the May 2008 issue of Icarus,3 Palmer and Brown modeled how the "dry ice" behaves. According to their calculations, it sublimates at phenomenally rapid rates--removing a layer 50 mm thick per orbit near the equator. The ablated CO2 moves to a cold trap at one pole until the seasonal sun angle changes; then it migrates to the other pole. During each 29.5-year Saturn orbit, they calculated, possibly all the CO2 migrates from one pole to the other. En route, much of it escapes the moon entirely: up to 2 trillion kg per orbit. They calculated that 12 percent of the migrating CO2 escapes to space each Saturnian year! The H2O ice undergoes similar thermal segregation.

Clearly this loss process has a time limit. "One can see that the long-term stability of CO2 is problematic," the authors said in a classic understatement. A generous 5-kilometer-thick starting inventory would be gone in 1.6 billion years--one third the assumed age of the solar system. Since much remains today,4 that is an extreme upper limit.

To save the old age theory, the authors speculated about special delivery of additional CO2 from comets, or venting from the interior, as on Enceladus. The latter of these improbable suggestions would only substitute one youth problem for another.5 They had to rule out both these solutions from lack of evidence. Faced with these constraints, the truth of youth is there in black and white.