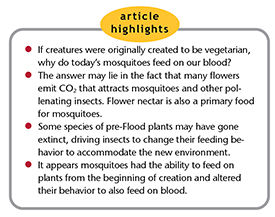 It’s late evening. You’re relaxing on the backyard deck when suddenly they find you. Mosquitoes! One way they locate you is by tracking the carbon dioxide (CO2) in your breath. Does this ability prove that mosquitoes were uniquely designed to use CO2 to guide their way to a blood meal? Why else would they have this ability if not for parasitic purposes? Recent studies reveal there appears to be a good reason mosquitoes were equipped from the very beginning of creation to detect CO2.

Interestingly, many insects—not just mosquitoes—possess the ability to sense CO2.1-3 Why would insects that aren’t seeking a blood meal have this ability? The answer remained elusive until new research revealed that flowers hold the key.4-6 Nectar-feeding moths, scientifically named Manduca sexta, prefer the Datura wrightii flower found in southwestern United States. This particular flower opens at dusk and withers by the following day. The researchers discovered that a substantial amount of CO2 is released as the flower opens. The metabolic process of nectar production generates more than enough CO2 for the moth to detect. The gas emission leads the moth to a very rewarding sugary meal, and the moth pollinates the flower—it’s a win-win relationship. Less gas is released as production subsides, and the moth may use this as a cue to spend more time and energy on fresh flowers.4,7,8 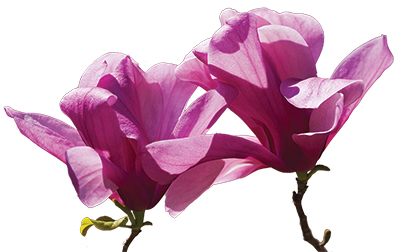 Experiments were conducted with two surrogate flowers made of white cotton paper that emitted different levels of CO2 with no additional reward. One emitted background levels of CO2, and the other emitted higher levels consistent with an opening flower. Ninety-five percent of the test moths went to the flower with the higher level of CO2.4

In addition to using CO2, mosquitoes also draw on your body heat to track down you and your nutritious blood. They can sense your elevated thermal energy against a background ambient temperature with ease. However, this isn’t unique to blood-feeding insects. Many insects that don’t feed on blood can detect heat—and flowers offer up another surprise. Floral thermogenesis describes the ability of plants to significantly raise flower temperature to increase plant-pollinator success rates.5,6 Some plants can even increase flower temperature up to a spectacular 54°F above the surrounding air temperature!9 The Magnolia sprengeri flower was recently found to put out enough heat to attract pollinators, increase fragrance volatility, and reward pollinator beetles with overnight heat.5,9,10

What’s This Got to Do with Mosquitoes?

To answer that, we first need to confirm that mosquitoes feed on nectar. Absolutely they do. Nectar is a primary food source in a mosquito diet. They also love rotting fruit and honeydew. But do they use their CO2 and heat-seeking abilities to track down their plant-based food sources?

A 2019 study published in Nature evaluated that very question. The study authors concluded with a resounding “yes.” Tansy flowers from Europe and Asia were used in both the field and lab to study the behavior of foraging mosquitoes. The ambient concentration of CO2 around the tansy flower significantly increases at dusk. This, of course, coincides with the mosquitoes’ evening feeding activity. The researchers then established that mosquitoes were using CO2 as a cue to feed on nectar, just like the Manduca moths do.11

Mosquitoes also use other floral cues to feed on nectar. Flowers look beautiful to humans, but the visual stimuli from the flower also motivates the mosquitoes’ food-seeking behavior.12,13 Just seeing a colorful flower can attract a hungry mosquito. Specific chemicals present on the plant and in nectar also engage the mosquitoes’ drive to locate floral resources.14 Remarkably, human skin and breath emit 9 of the 20 chemicals that mosquito-friendly flowers present.15

The abilities of insects to seek CO2, heat, and various chemical compounds aren’t traits specifically designed by God for blood-sucking parasites but rather are common tools found throughout the insect world. If insects in general have the ability to feed on flowers, then the mosquito probably has them for the same reason. Therefore, in the beginning when everything was good and all creatures were vegetarian (Genesis 1:29-30), mosquitoes already had the same tools they possess today. The curse didn’t somehow add these powerful capabilities sometime afterward. This also means mosquitoes didn’t evolve their tools. Like the large, sharp teeth God originally put into animal mouths for eating vegetation, new and destructive uses for good animal traits like CO2 sensors developed after sin. In other words, new body parts didn’t arise after the curse—only their usage changed. 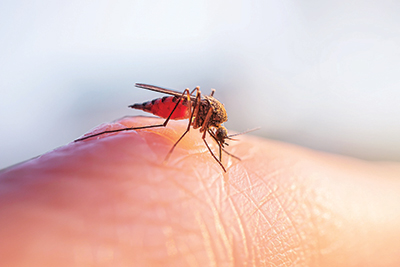 Why then do mosquitoes use these tools to feed on blood in this fallen world? Extinction may hold a clue. An unknown multitude of plant kinds have gone extinct for many different reasons. The simple explanation is that the diet required for a mosquito to lay eggs is different from most insects’ diets in order to get the proper nutrition during the larval stage. Today, plants on Earth don’t offer easy access to the complete range of nutrients mosquitoes need to thrive. Extinct plants—those that grew before the Flood, for example—could have had flowers that produced heat, CO2, volatile odors, and a nectar with all the proper nutrients for mosquito health.

Nectar found today consists of much more than just sugar. It’s packed with amino acids and many other micronutrients.16 Before the Flood, nectar with the appropriate nutrients could have been sealed away in a plant’s chamber that mosquito mouthparts could have pierced. After all, many plants today employ various mechanisms to ensure that only the planned bug species access their nectar. Some even use deadly toxins that are harmless only to the intended pollinators.17

When mosquitoes suffer from dehydration, they become very aggressive. It may seem counterintuitive, but some mosquito-borne diseases actually spread more readily during times of drought.18 As dehydration hits, a marked increase in blood-feeding occurs because mosquitoes become desperate. Mosquitoes are also pliable as to what they eat.18,19 Eventually, they detected and learned that the nutrients they need are in your blood. Basically, you are a walking, CO2-emitting, chemically volatile, heat-signature-possessing “flower” with the right food.

The authors of the Nature study reached the same conclusion, stating that “haematophagy [blood-eating] of mosquitoes may have arisen from phytophagy [plant-eating].”11 Essentially, they are saying that mosquitoes originally had all of these tools to feed exclusively on flowers and not blood. From their evolutionary perspective, somewhere along a path of millions of years mosquitoes began to feed on blood by employing the tools they had already been using on flowers.20

Why does a lion eat a gazelle? The lion is simply using the tools it already had to live. So, when you see a mosquito on the backyard deck, realize it’s starving and just trying to survive with tools that it was created with—originally for a harmless purpose—from the very beginning.