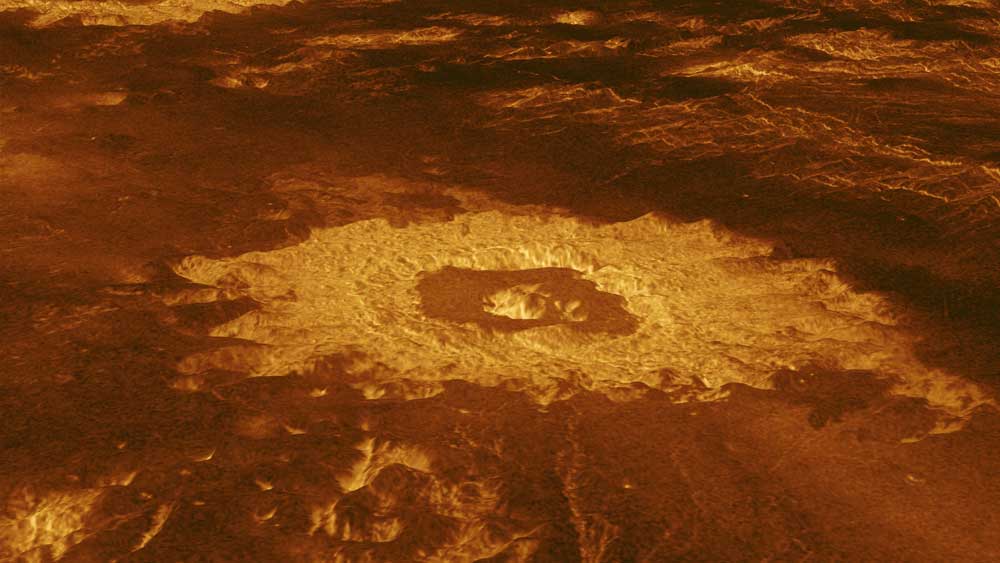 NEWS     CREATION SCIENCE UPDATE     THE SOLAR SYSTEM MUST HAVE BEEN CREATED
Venus Likely Geologically Active
BY JAKE HEBERT, PH.D. *  |
MONDAY, AUGUST 16, 2021
In June 2021, researchers used radar images from the Magellan spacecraft to show that crustal blocks on the Venusian surface jostle against one another like blocks of pack ice on a lake.1 This is just one of multiple lines of evidence that Venus is geologically active, and thus looks younger than expected.2

Based on data obtained from the Magellan spacecraft, uniformitarian astronomers have long believed (despite their general aversion to catastrophism in geology) that a catastrophe re-paved the Venusian surface 500-700 million years ago.3 One of the main arguments for this view is the small number of craters on Venus, as well as the fact that these craters seem relatively pristine. Since secular astronomers think the solar system endured heavy meteorite bombardments billions of years ago, they saw this as evidence that the Venusian surface was repaved in the relatively recent past.3

Based on this belief, secular scientists concluded that Venus should now be geologically dead.4 This is because Venus does not have plate tectonics the way Earth does. Earth’s plate tectonic system efficiently transfers energy from the Earth’s interior to the surface. But without plate tectonics on Venus, heat would theoretically continue building up until within the mantle until large sections of the mantle quickly melted, causing global  lava flows one to three kilometers deep.5,6 Afterward, the planet would be geologically stagnant, so much so that such a catastrophic event might never happen again. Hence, secular scientists were expecting Venus to be geologically inactive.5 Except that it apparently isn’t!

Although the geological stagnancy of Venus has been the majority view since the 1990s,5 some now contest it. Instead, they suggest that multiple lava flows over time shaped the Venusian surface, rather than a single enormous Venusian catastrophe.6 In that case, the above argument may not apply and active volcanism on Venus may not necessarily be a problem for uniformitarianism.

Many secular scientific predictions about our solar system were just flat-out wrong. And what do these wrong predictions have in common? They were based on a belief in evolution and deep time. Given such a poor track record, isn’t it about time to try something else? In contrast, creation physicist Russell Humphreys has made multiple successful predictions about the magnetism of bodies in our solar system.15-16

Recent volcanism on Venus may or may not be a problem for deep time, but it is hardly surprising, and definitely not a problem to be solved, if the Lord Jesus created Venus just thousands of years ago, as Scripture indicates.

*Dr. Hebert is Research Scientist at the Institute for Creation Research and earned his Ph.D. in physics from the University of Texas at Dallas.
More Research
The Latest
NEWS   ACTS & FACTS   PODCASTS