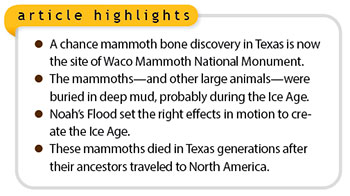 Hunters in the 1970s discovered mammoth bones exposed in sediments near the confluence of the Bosque and Brazos Rivers in north central Texas. They notified scientists, who began excavating the site. Decades later, in 2015, the site and surrounding land became a national monument.

Today, visitors hike a short path to a large air-conditioned building that covers the dig site. A herd of huge Columbian mammoths got buried in mud. How and when did they die? Waco Mammoth National Monument offers an opportunity to allow God’s Word to help answer these questions and to place the Ice Age in world history. 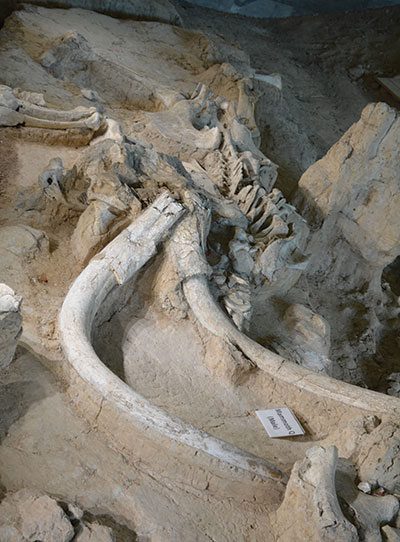 All this mud, now dry ground, demands an immense catastrophe. So much sediment rapidly covered the ancient landscape that it entombed whole mammoths, an Ice Age cat, a giant tortoise, and camel remains.

Another sign nearer the burial site says, “Scientists think the mammoths may have been gathered at a watering hole when a flash flood struck, trapping the animals in thick mud, killing them.” Possibly, huge Ice Age storms dropped so much rain so fast that the runoff made a muddy torrent that filled the shallow valley.

The extent of sediment offers a key clue to connecting the mammoths’ flash flood to the Ice Age. Rock layers from Noah’s Flood tend to extend very flat across hundreds of square miles. That calls for sheets of water to cover whole continents. In contrast, smaller Ice Age sediment volumes fill lowlands and valleys.

A second key clue to connecting the sediments at Waco Mammoth National Monument to the Ice Age is their position. These valley-confined sediments lie atop widely spread rock layers far below the surface. The Flood’s continent-covering waters explain the lower widespread layers. The Ice Age’s later storms explain the mammoths’ sediments at the surface.

Noah’s Flood best explains the Ice Age.1 The Flood happened first. It produced untold volumes of hot, molten material to create all-new seafloors. It warmed the oceans. Evaporation increased. Water vapor rose into the sky until it cooled and fell back down as rain in Texas’ lands and as frozen forms farther north. As residents in Florida can attest (particularly those who watch weather forecasts in September), warmer sea surfaces fuel larger hurricanes. During the Ice Age, Flood-warmed seas powered hurricanes so huge that we call them “hypercanes.”2 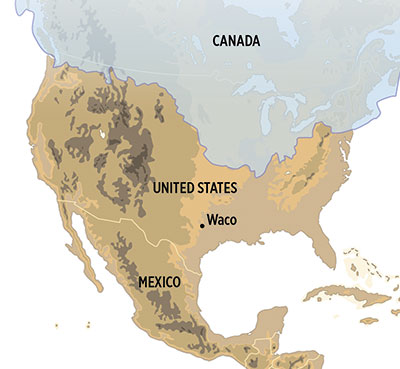 Possibly an Ice Age hypercane gorged itself on warm Gulf waters before dumping its contents onto central Texas. Camels, cats, tortoises, and mammoths caught in low areas had too little time to escape the torrents.

The National Park Service study on the site says that researchers in the mid-1980s obtained a carbon date of 28,000 years before present (BP) for a mammoth bone. It says this “became the de facto date of the mammoth event.”3 Later researchers tried uranium-series (U-series) dating on mammoth tooth enamel. But these results “were not initially considered accurate because they were much older than the expected age of the site.” Why not base ages on dating results instead of expectations? 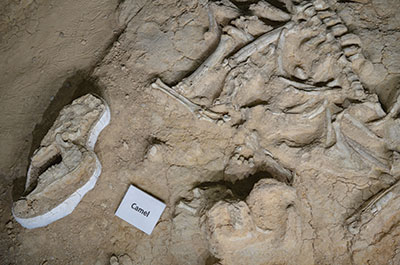 Mammoths, animals, and mankind migrated from the Ark’s landing site in the Middle East. They multiplied into Asia and the Americas. Back then, when much of the world’s waters were frozen into ice sheets, there were land bridges that connected Siberia to Alaska.

Using just the Bible and allowing for a few unrevealed details, the Flood happened in 2472 BC (4422 BP), give or take a few decades.5 All the earth’s broad and extensive flat-lying rock layers fell into place during that year. Waco’s mammoths must have been buried some centuries afterward.

Mammoth remains at Waco tell a sad tale of Ice Age catastrophe. They don’t present a defensible challenge to the history in God’s Word. Instead, they highlight how helpful the Bible is in explaining our earth’s rocks and fossils.