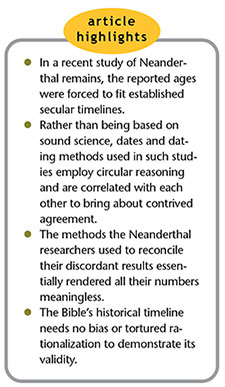 A recent Neanderthal study in the journal Science mixed detailed archaeological finds with stories about human origins. As is typical, the report’s age assignments for fossils fit evolutionary time instead of the Bible’s much shorter timeline of thousands of years. Its age-dating exercises reveal more about what these scientists believe than what the rocks and fossils actually show.

The Neanderthal human remains were found in a cave on the Portuguese coast. The Science report dated them “to ~86 to 106 thousand years ago.”1 What evidence demands that we accept this age instead of the Bible’s historical timeline?

Researchers can begin the process of age dating by assigning predetermined age designations like MIS (marine isotope stage) to rocks or fossils. MIS designations derive from isotope ratios that vary according to the depth of the seafloor sediment core they’re drawn from. But can anyone know when each variation happened? Secular scientists use astronomical cycles that assume old ages in the first place to pin long ages on the isotope fluctuations. That’s circular reasoning, not good science.

ICR physicist Jake Hebert critiqued sediment core research that produced names like MIS 3. He showed how the scientists who built these evolutionary time charts contrived apparent agreement between features like isotope variations and deep time.2 They stretched or squished the variations until they “fit.” More bad science. 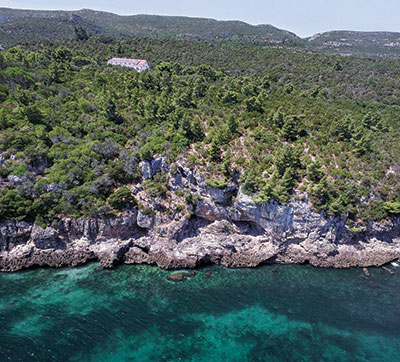 The Neanderthal researchers might not care about such contrivances as long as the timeline fits evolution. The archaeology team wrote in Science, “This site has been assigned to MIS 3 or MIS 4 on the basis of anchoring OSL dating results to radiocarbon chronologies, though the latter must be minimum ages only.”1 OSL refers to optically stimulated luminescence. If OSL actually worked as an accurate dating method, then nobody would need to anchor it to an outside chronology. And if radiocarbon chronologies were real, then workers would take them at face value instead of sidelining them as “minimum ages only.”

The 171-page Supplemental Materials that accompanied this study show more mishandling. How did the study authors reconcile a radiocarbon result for one of the cave’s limpet shells of 2,677±28 BP into their 86,000-year age assignment for the remains?3 The team conveniently claimed that this and other shells were younger but somehow got “reworked” into older layers.4 If they can claim these samples entered much older sediments, then couldn’t any or all of the other samples also derive from other times? Deep-time expectations, not data, opened the door to dismiss age results the researchers didn’t like.

Some of their radiocarbon ages also disagreed with uranium-series dating used on tiny mineral layers in cave formations called speleothems. The study authors wrote, “However, the radiocarbon ages obtained for them [the shells] are significantly younger than the speleothems sealing the deposit they were found in.”5 Oops.

The team invoked bacterial activity, precipitation of carbonates, and isotope exchange as processes that may have altered the carbon isotope ratios and given bad dates. By that logic, one or all three of these factors could have ruined all the radiocarbon ages. Responsible science would reject the whole lot as meaningless numbers.

Buried beneath bold claims like “over 80,000 years ago” lies an underground ant bed of workers who scrub results until they confirm deep-time beliefs. Discordant, reverse-ordered, and subjectively dismissed or approved “ages” pose no threat to the Bible’s eyewitness history.