Download Things You May Not Know About Evolution PDF

Recently I had the privilege of addressing a gathering of state legislators and other influential political individuals. These gifted men and women are typically highly educated, most having been taught evolution and an evolutionary worldview extensively and exclusively. Now, they have the power to establish educational guidelines and societal norms. Sponsors of the banquet requested a talk both informative and evangelistic. What can one say in 45 minutes to a gathering of influential leaders that will make a difference? I don't pretend to know what would be best, but perhaps you would be interested in what I did say. My talk was entitled, "Three Things You May Not Know about the Theory of Evolution." I was speaking only from notes, but a summary of the talk, with a few alterations, appears below.

I started with definitions for clarity. There is much misunderstanding of important words today, and some purposefully misuse words to confuse students and hide their true intentions.

Science has to do with careful observations in the present. Unlike true science, both evolution and creation are, at best, historical reconstructions of the unobserved past since no one can empirically observe either. In reality they are complete worldviews, ways to interpret all observations in the present, and a basis for all of life's decisions. In previous years, "science" was understood to mean "the search for truth," but many now limit that to a search for naturalistic explanations, even if that search leads to hopeless conclusions. 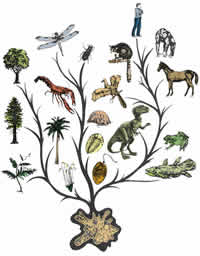 Evolution implies "descent from a common ancestor" with all of life related, consisting of modified forms of very different things, such as a person descending from a fish. Evolution does not mean merely "change," for all things change with time. For clarity we must restrict this term to meaningful change, especially the descent of new types of organisms from earlier, different ones.

Creation denotes abrupt appearance of basic categories of life without any basic type having descended from some other category, and with no extensive change once the category appears. Lack of change is known as stasis. Fish have always been fish, ever since they first appeared, and dogs have always been dogs. Fish and dogs and all else may have varied a little, but did not come from a common ancestor.

The term microevolution is sometimes used for small, horizontal changes that are readily observed (such as the various breeds of dog), while macroevolution implies large vertical changes (fish to dog) that have never been observed. These big changes constitute evolution as Darwin used the term and as the general public understands it.

Following are three important points about real evolution—significant changes--the origin of new categories of life from older different ones. Even if one is highly educated about evolution, he may not know these things, but this knowledge is essential if intelligent decisions are to be made.

The design we see in living things is far too complex, too designed, too engineered to be the result of mere undirected, random forces. Even the simplest thing we could call "living" is vastly more complex than a super computer and super computers don't happen by chance. Every cell is composed of many constituent parts, each one marvelously designed and necessary for the whole. Without any one of its parts, the cell could not live. All of it is organized and energized by the magnificent DNA code, an encyclopedia of information which, even though modern scientists can't read it, it is read and obeyed by the cell. Surely some things need a Designer/Author.

B. Evolution (i.e., macroevolution) doesn't happen in the present.

If it ever happened in the past it seems to have stopped. Maybe environmental conditions don't change much, or selective pressures are too little, but everyone knows that real macroevolution is not and cannot be observed today.

Mutations, random changes in the DNA information code, are observed, but never do these "birth defects" add any innovative and beneficial genes to the DNA. Instead, mutations are either repaired by the marvelous mechanisms elsewhere in the DNA, or are neutral, harmful, or fatal to the organisms.

Likewise, natural selection occurs all around us, but this only chooses from among the variety that already exists, it can't create anything new. Evolutionists may talk of actual selection as if it had a mind of its own and does the work of evolution on purpose, but it is inanimate and unthinking, impotent to bring about more than micro-evolutionary changes.

C. Evolution didn't happen in the past.

When we look at the record of life in the past, we see no conclusive evidence that any basic category arose from some other category either. We see that some categories have gone extinct, like the dinosaurs, but the rest fit into the same categories that we see today. We see dogs in great variety, even some extinct varieties, but no half dog/half something else. Evolutionists have a few transitional forms that are commonly mentioned, but if evolution and descent from common ancestors really occurred we should see multiplied thousands of transitional forms. We do not see them.

The most famous living evolutionary spokesman, Dr. Stephen J. Gould, paleontologist at Harvard University, has made a career out of pointing out to his colleagues that the fossil record shows abrupt appearance and stasis. He is no friend of creation and yet as an honest scientist he must acknowledge this now well-known fact. He proposed the concept of "punctuated equilibrium" to account for the fossils in which life usually is in equilibrium, or stasis, and doesn't change at all. When a category of life encounters a sudden environmental shift, it changes rapidly into a different stable form, so rapidly in fact that it leaves no fossils. How convenient. Evolution goes too slow to see in the present, but it went so fast in the past it left no evidence. Gould is arguing from lack of evidence!

But lack of transitional forms is exactly what should be the case if creation is true. The fossil record supports abrupt creation of basic kinds much better than either slow or fast evolution.

D. Evolution can't happen at all.

The basic laws of science are firmly opposed to evolution, especially The Second Law of Thermodynamics which insists that all real processes yield less organization and information in their products than in the original. This basic law leads to de-volution, not evolution. The presence of abundant external energy has never, as far as science has observed, produced beneficial mutations or added information to the genome as evolutionists claim. Instead, an abundance of incoming energy will hasten the deterioration of living things, especially the DNA. It will not bring about their evolution. Evolution is against the Law!

Evolution doesn't happen, didn't happen and can't happen, and is fully unable to account for the design that we see.

We've all heard the claim that "evolution is science and creation is religion." This oft-repeated mantra originated with the testimony of Dr. Michael Ruse at the 1980 Arkansas creation trial. The presiding judge, known for his prior bias toward evolution, entered it into his formal opinion, and this flag has been waved by evolutionists ever since. But Dr. Ruse, an expert on the nature of science and scientific theory has recently admitted that he was wrong--that "evolution is promulgated by its practitioners as . . . a religion, a full-fledged alternative to Christianity. . . . Evolution is a religion." Which brings us to point two.

II. Evolution is a complete worldview.

Evolution is the religion of naturalism, the antithesis of supernaturalism. It purports to answer all the "big" questions of life. "Who am I?" "Where did I come from?" "Where am I going?" "What's the meaning of all this?" Claiming that science equals naturalism excludes a Creator from science by definition. Even if that Creator exists and has been active, such a notion is unscientific. This religion of naturalism, that we are merely the result of blind random forces is logically compatible only with atheism. It has resulted in life without accountability to a Creator and has led to a licentious society full of great heartache, for evolution thinking underpins racism, abortion, infanticide, euthanasia, promiscuity, divorce, suicide, Social Darwinism, etc. While science and technology have accomplished great things, often by evolution believers, the concept of evolution itself has lead to nothing useful.

III. The religion of evolution is the opposite of Christianity.

Evolution can be summed up by the phrase "survival of the fittest" and the extinction of the unfit. The death of the majority allows the few with beneficial mutations to continue. The strong thrive at the expense of the weak and helpless. The only things that matter are survival and reproduction. Evolution starts with small beginnings and over time, with volumes of bloodshed and disease, arrives at man. As Darwin concluded in the last paragraph of Origin of Species, death, carnivorous activity and extinction produced man.

Christianity poses a very different picture. It starts with a mighty Creator who created a "very good" (Genesis 1:31) universe, one in which was no pain, suffering, or death. He recreated His image in man, and graciously supplied his every need, including personal fellowship with Him. This perfection was rejected by man, and now all of man's domain suffers the "wages of sin" (Romans 6:23), deteriorating and dying under the effect and penalty of sin. All things had been placed under Adam's stewardship, and now all suffer under his penalty. Plants wither, animals die, people suffer and die. Even inanimate things deteriorate. The moon's orbit decays. The sun uses up its fuel. The entire creation suffers (Romans 8:22).

Today we see extinction and survival of the fittest, but these are not creative processes, they are reminders to us to return to our Creator for His gracious solution to our sin penalty, for He graciously sent His Son to die as our sacrifice. The most fit of all, died for the unfit. He gives us eternal life as a free gift of His grace.

Contrast these concepts with survival of the fittest and struggle for existence, and you will see them as opposites. While evolution offers nothing but struggle and ultimate elimination, Christianity offers everlasting life free from every struggle and death.

Both evolution and Christianity are complete worldviews. Of the two, creation is better supported by scientific observation, and it alone makes sense out of life and eternity.