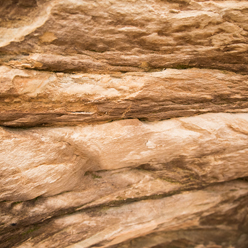 Sheet sands are widespread, thin sandstones that blanket large regions of the continents. Most are composed of extremely pure quartz of uniform, well-rounded grains that contain almost no shale. Secular geologists have tried to explain their presence for decades and have failed to develop a satisfactory answer.1 Their best models invoke “atypical depositional conditions unique to shallow epeiric seas” and “are viewed as sufficiently different from other modern and ancient sedimentary successions that some textbooks treat them as a separate category of stratigraphic unit.”2

Sheet sands are widespread, thin sandstones that blanket large regions of the continents.

In other words, not only are the sands hard to explain, they fail to follow uniformitarian expectations. Many of these sheet sandstones extend for hundreds of miles and are just a few tens of feet thick. The so-called Tapeats Sandstone that blankets much of North America is an excellent example (Figure 1) and is found at the base of the Sauk Megasequence (Cambrian through Lower Ordovician systems).3 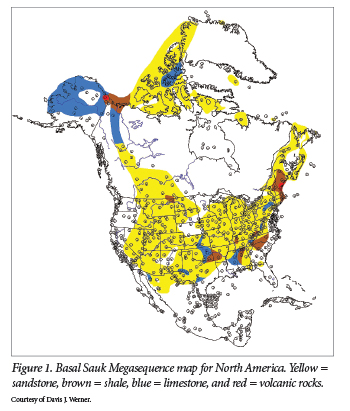 The continuity of the basal Sauk sandstone layer across North America is a testament to the Flood, specifically to the extent and uniformity of the first marine transgression of the continents. In many places, the base of this layer is also known as the Great Unconformity. This erosional surface has been mapped across multiple continents and is accepted as a global phenomenon.4 The basal Sauk Megasequence also coincides with the Cambrian Explosion, where fossils representing most animal phyla suddenly appear in the rock record. Most creationists recognize this sandstone layer as the Flood’s first extensive deposit.

The continuity of the basal Sauk sandstone layer across North America is a testament to the Flood.

This same layer also extends across North Africa and the Middle East, including Jordan and the city of Petra (Figure 2). It can even be found across parts of South America, demonstrating that the basal Sauk sandstone layer (the Tapeats equivalent) extends across multiple continents.

Most creationists recognize this sandstone layer as the Flood’s first extensive deposit.

The Tippecanoe Megasequence (Ordovician to Silurian systems) just above the Sauk also exhibits a large sheet sand at its base called the St. Peter Sandstone. This thin sandstone spreads across the midsection of North America. It can be correlated from Canada to Texas and Montana to West Virginia. 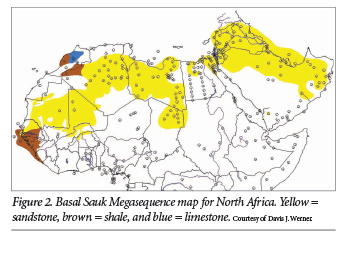 Extensive, thin sheet sandstone layers continue to baffle secular geologists. They have failed to develop an acceptable model to explain these widespread deposits, and yet there they are, stacked one on top of the other across multiple continents.

It appears that these geologists’ refusal to take into account the history recorded in the Word of God is blinding them to the real explanation for the vast sandstone layers. Genesis clearly describes a global flood event. The Flood offers the only reasonable explanation for the thin, uniform sandstones that were deposited at the same time across multiple continents. God’s Word can resolve many mysteries if we simply choose to believe it.

Is Newfound Dinosaur Fossil the Biggest Ever?
Whether dealing with athletes, sports teams, skyscrapers, or animals, we always want to know who or what takes the top spot. Researchers just published...
BY: BRIAN THOMAS, PH.D.

"Simple Yet Elegant" Design in Fruit Flies
Graduate student Shiuan-Tze Wu led a study of some ingenious organization into the odor-sensing cells of fruit flies. He and his collaborators at the La...
BY: BRIAN THOMAS, PH.D.