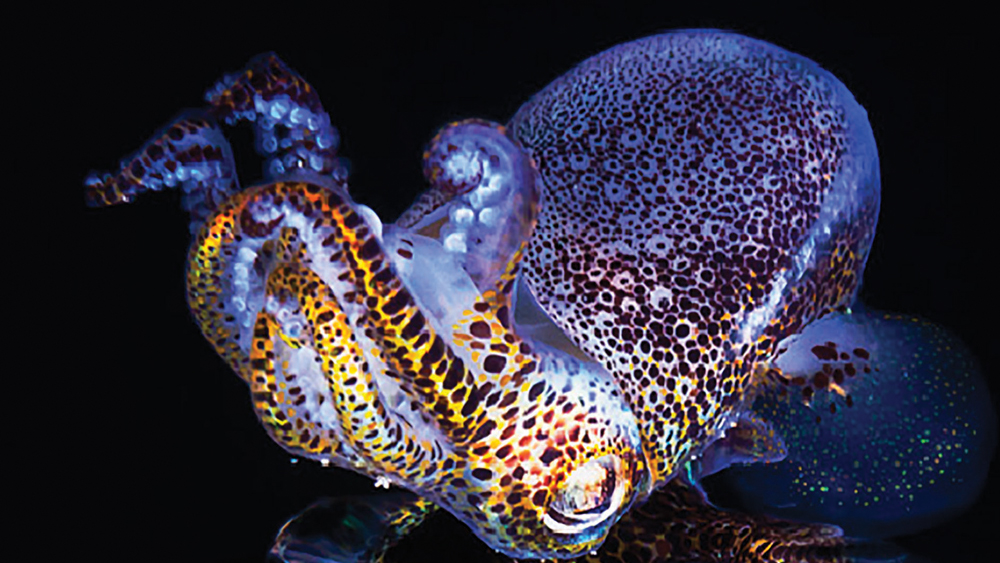 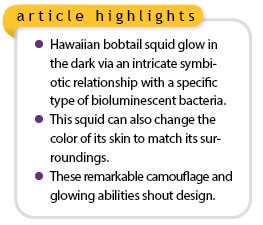 Scientists spend whole careers trying to figure out how these squid lights work. Bioluminescent bacteria named Vibrio fischeri colonize unique light organs inside the squid’s bodies. The squid feed the bacteria, and the bacteria light up.

Simple, right? Well, it’s simple to look at but intricate in its setup and function. Bobtail squid light organs have lenses and reflectors to control light direction and intensity, filters to control light color, and expandable ink sacs to control light volume (illuminance). It needs all these parts to match its glow with the ever-shifting moon glow from above.

A closer look at the required interactions between germ and squid reinforces faith in the Creator revealed in the Bible.

Bobtail squid are the size of a fruit fly when they hatch. They need to light their lamps before they can start cloaking and then feeding. They spend their first 48 hours of life prepping their light organs.

The light organ has several perfectly integrated parts. These include six crypts—three on each side of their bodies. The crypts nurse pure colonies of Vibrio fischeri. Bobtail squid use three specific steps to culture V. fischeri out of hundreds of bacteria floating in ocean waters.

At birth, bobtail squid have lobes just outside their light organs. The skin there makes mucous when it detects bacterial cell walls. Tiny ports lie at the base of each lobe. The ports lead to ducts lined with cilia spaced two microns apart. This keeps out all microbes except bacteria, which are about two microns wide.

The cilia wave like microscopic pool noodles that push microbes out—the opposite direction that Euprymna needs Vibrio to go. Squid tissues kill microbes with nitric oxide and acid. Vibrio come already equipped to endure those conditions on their journey to the crypt.

Squid tissue releases chemicals that attract Vibrio down the ducts toward each crypt. One Vibrio cell enters each crypt after the squid’s first six hours of life. The squid’s protective crypt feeds Vibrio with sugar and amino acids in solution, like plant nectar. Vibrio notify the squid when they have grown into a colony.

Bobtail squid tissues sense and interpret bacterial cell wall chemicals as saying, “This crypt is full, so would you please fold up your welcome mat?” Once Vibrio tells the squid to finish forming its light organ, the squid narrows its ducts to keep out invaders, absorbs the welcoming lobes it no longer needs, and finishes forming lenses.1

Without Vibrio, the squid cannot turn on its lights. Without the squid, Vibrio don’t stay lit. Since this relationship shows such strong purpose, it stands to reason that it was made on purpose. In fact, the Vibrio and squid could never relate to each other unless each had a highly engineered interface system that facilitated the exchanges in information and materials.2

Bobtail squid light organs have vent ports. The animal squirts about 95% of each day’s bacterial growth out the vents just before dawn. (More on this later.) The squid nurtures new bacterial growth while it stays hidden in the sand during the day. It turns out that God designed bobtail squid to culture bacteria long before microbiologists began doing it.

Euprymna comes stacked with many more jaw-dropping design features. It can glue sand to its skin every morning. This makes great camouflage. It shoots ink to distract predators. Its Creator positioned that same ink sac as a backdrop for the light organ, like the black layer behind a mirror.

Plus, a bobtail squid changes the color of its skin to match its surroundings. These three features combine with its cloaking device to help these little guys thrive in a big ocean. Features like these showcase the Creator’s handiwork in unique ways. But there’s even more to their light organs.

The light organ crypt cells begin daily cycles two days after the bobtail squid hatches. Researchers discovered that just before dawn and right after the squid has vented most of its light-making germs, the squid’s cells upregulate genes that code for structural proteins. Once built, the new proteins resurface the lining that will interface with that day’s Vibrio growth. Then just after dawn, the squid cells downregulate—turn off—those same genes.3 It spends the morning hours, while covered in sand, equipping each crypt to nurse its few remaining Vibrio cells into a full batch.

How does Euprymna know when to start and stop these daily cycles? The bacteria tell them!4 The germs use light and chemicals to signal squid cells when to upregulate and downregulate the squid’s genes. They were made for each other.

How Do Vibrio Glow?

The bacteria don’t start converting chemical energy into light energy until they have reached a certain cell density. Each bacterial cell exports molecules called 3-oxohexanoyl-homoserine lactone. They fit like keys into locks found along Vibrio cell walls. Each cell counts how many of its locks the chemical keys have turned. Just like man-made threshold sensors,5 this living sensor turns on its suite of light-making enzymes only after it has counted a preprogrammed number of these chemical keys.

Keys only work if they are the exact shape that fits the lock. In other words, they were made together and on purpose. It turns out that the Creator made locks and keys long before human locksmiths got into the trade. When the bacteria live in seawater, Vibrio keys just drift away, and the bacteria won’t light up. So, the confined space of each crypt is critical to lighting the bacterial glow lamps. These two very different creatures work in intimate harmony throughout the squid’s life.

Each crypt has armed guards called hemocytes. They scour the place for bad bacteria. If invaders took over, the squid would no longer glow.

Every day new hemocytes travel from the bloodstream into the crypts. After they finish guard duty, they die to feed the growing Vibrio. These armed guards become self-sacrificing nurses. Who programmed these particular hemocytes to provide the needed food for Vibrio?

Back to the Beginning

So many core components have to be in place for bobtail squid to live. How could these remarkable systems possibly evolve?

Some see time as a substitute engineer when they talk about how this intricate symbiosis arose. Bobtail squid and their glowing bacteria buddies have supposedly been living together so long that they have adapted to help each other perfectly. Any problem with this idea?

Well, for starters, time does not build cool stuff. It instead allows more opportunity for pre-existing systems to break down, diffuse, cool off, lose energy, and lose information, as undirected (natural) processes always do.6

Who would look at the precise interface between, say, a cell phone and its charge cord and think, “Well, I suppose charge cords and cell phones have been together so long that they shaped themselves for each other”? Time merely allows more opportunity for the cell phone to lose charge or for the cord plug to bend out of shape.

These squid need Vibrio. They therefore need every part of their systems that attract and maintain those Vibrio. They even needed—from the very start—their ability to “talk” with Vibrio and Vibrio with them via highly engineered interface systems. Without all this in place from the beginning, we would have no Hawaiian bobtail squid to marvel at.

Evolutionary thinking calls upon a god of long ages working through random changes to perform what could only have occurred in an instant—bobtail squid/bacteria symbiosis. And it turns out the Bible describes a Creator who “commanded, and it stood fast.”7 No time required. Just Christ Jesus our Creator. He made this symbiotic light organ to illuminate His handiwork.