Animal and human life depends, either directly or indirectly, on plant life. And all plant life depends on extraordinarily precise biochemical machines that capture and convert light energy into energy that living cells can use. Researchers at the Argonne National Laboratory in Illinois have been using ultrafast spectroscopy to discover just how these systems work. Their most recent discovery has them baffled over the newfound complexity of photosynthesis in purple bacteria. It turns out that photosynthetic machinery is such advanced technology that it takes advantage of the quantum nature of light. 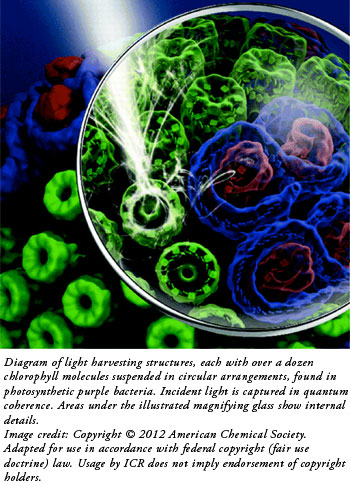 Researchers first cooled the photosynthetic bacteria to less than 150 degrees below freezing so that the superfast photon and electron interactions within bacteria's light-harvesting protein complex would occur slow enough to investigate in more detail.

They shined one wavelength of light onto specific pigment molecules inside the biochemical light harvesting protein complexes. Each complex contains multiple pigments in precise arrangements. "Argonne scientists saw something no one had observed before: a single photon appeared to excite different chromophores [pigments] simultaneously," according to an Argonne Labs feature story.1

This matches strange observations of light's "quantum coherence," whereby a single fast-moving particle appears in two places at the same time.2 Bacterial biochemistry exploits this property of light when harvesting it, but how? The researchers wrote in the Proceedings of the National Academy of Sciences that capturing light in its quantum coherence was "most likely due to electronic coupling between the cofactor [pigment]," and precisely positioned proteins specify the coupling.3

Like those of low-light algae,4 the bacterial light-harvesting complexes are arranged to exploit light quanta to maximize energy transfer over large distances. This dramatically increases their efficiency of harvest.5, 6

In other words, bacteria are equipped with machinery that could only have been built by someone—or by other machinery that ultimately was built by someone—who had intricate understanding of the quantum nature of light.7 This so astounded coauthor Gary Wiederrecht that he asked, "How did Mother Nature create this incredibly elegant solution?"1 Of course, "she" didn't. If she could have, then he would never have thought to ask that question.

Similarly, Argonne biochemist and senior author David Tiede said, "It makes us wonder if they are really just there by accident, or if they are telling us something subtle and unique about these materials."1

Mother Nature and her magic wand of accidents could not have created such advanced technology. It is beyond the cutting edge of current human technology and even current human comprehension of quantum coherence. And if bacterial photosynthetic machinery rules out Mother Nature, then its origin can only be explained in the same way that other machines find their origins—in someone outside of nature.