The Outer Darkness | The Institute for Creation Research
Skip to main content
ACTS & FACTS     BACK TO GENESIS     THE KNOWLEDGE OF THE NIGHT     ASTRONOMY
The Outer Darkness
BY HENRY M. MORRIS, PH.D.  |
MONDAY, OCTOBER 01, 2001

Astronomers have guessed that there are possibly as many as ten thousand billion trillion stars out there in the observable universe, of which perhaps five thousand can be seen without a telescope. If the universe is expanding, as many astronomers believe, there is an outer limit to this vast population of stars, as defined by the distance thus far attained by the expansion. This limit might be considered the boundary of the universe.

This boundary is also, practically by definition, the limit of the so-called background radiation, presumably a cosmos-filling remnant of the postulated primeval Big Bang which its proponents believe must have started the expansion.

No matter where astronomers point their telescopes, they see a distant sheet of light surrounding us. Beyond that enormous shell of radiation, astronomers can see nothing. We are caged in by this surface; the cosmic microwave background (CMB), the faint afterglow of the big bang.1

Since there is no radiation beyond this limit, there are no stars and no light either—only outer darkness, so far as we can tell. But even within the known cosmos, evolutionary astronomers seem increasingly obsessed with the idea of darkness. Even with the tremendous mass of those possibly 1025 stars, these theorists believe that there are still vast amounts of certain mysterious kinds of matter which cannot be seen or measured. They call this dark matter, the gravitational influence of which somehow holds galaxies and galactic clusters together.

For several decades, astrophysicists have postulated the existence of dark matter—objects that have mass but don't interact with light very well. . . . scientists have calculated that baryonic, ordinary matter—the stuff of stars and of people—makes up just over 4% of the energy and matter in the universe. What about the rest? Combined with observations from galaxy surveys and other sources, the CMB measurements give some rather troubling numbers. They show that about 30% of the stuff in the universe is dark matter.2

Dark matter even comes in two flavors, hot (HDM) and cold (CDM). And all the while, astronomers and physicists have refined their dark matter theories without ever getting their hands on a single piece of it.3

However, that still leaves about 66% of the universe's "stuff" to be accounted for beyond that! In particular, there is strong evidence now that the "expansion" of the universe is accelerating near its boundaries. The gravitational influences out there seem to be driving it apart, and this would require some kind of tremendous energy whose source and character are unknown. So cosmologists just call it "dark energy"!

Astronomers have dark imaginations. They're already obsessed with another phenomenon that they call dark matter, which is entirely separate from dark energy. Dark matter is the invisible material that . . . gathers into vast clumps and exerts an ordinary gravitational tug on its surroundings. . . . The proposed dark energy, in contrast, would inhabit empty space and would be evenly distributed throughout the universe. Moreover, dark energy would exert a repulsive force—what might be called antigravity.4

This strange universal anti-gravity field has been given the name "quintessence" by some astronomers. No instruments have been able to measure it, or even record it, but they believe it must be there on the basis of the intensity of light from very distant supernovas, which to them suggests dark energy.

Where would such a strange field come from? . . . An exotic possibility is that quintessence springs from the physics of extra dimensions.5

Some six extra dimensions (in addition to length, width, depth, and time) have been mathematically predicted in string theory, but this also is quite an illusory concept to many.

And although the theory of super-strings is now causing great excitement in the physics community, there is to date not a shred of experimental or observational evidence to support it.6

In any case, the picture now occupying the minds of many evolutionary cosmologists is that of an immense universe with multitudes of stars and other objects in great variety, but which actually comprise only a minute part of the matter and energy of a very "dark" universe.

Dark energy would complete a picture of the cosmos in which more than 98% of the matter and energy is of some exotic, unseen form.7

And, since the law of entropy apparently is of universal extent, even the visible stars will eventually disintegrate into darkness, or worse.

To be sure, approaching gravitational equilibrium (in addition to thermal and chemical uniformity) would mean a Universe full of black holes.8

Dark matter, dark energy, and ultimate black holes everywhere certainly sound foreboding—if true. And that's just the known universe! What about the darkness outside of that?

It is well to remember that a great deal of modern cosmology, especially when its practitioners are trying to predict its destiny and retrodict its origin, is sheer mathematical manipulation and evolutionary philosophical imagination. "It ain't necessarily so!"

But it is significant that these speculations lead so often to words like "darkness" and "blackness." These are Biblical terms too.

Speaking of those teachers and leaders who would promote anti-Biblical doctrines of God and His great salvation through the Lord Jesus Christ, the Apostle Peter warned that "these . . . speak evil of the things that they understand not; . . . to whom the mist of darkness is reserved for ever" (II Peter 2:12,17).

Similarly Jude compares them to "wandering stars, to whom is reserved the blackness of darkness for ever" (Jude 13).

The Lord Jesus Himself referred to "outer darkness" as the ultimate home of the lost. In His familiar parable of the talents, the judgment on the servant whose unfruitfulness had proved he was not a true servant was to "cast ye the unprofitable servant into outer darkness: there shall be weeping and gnashing of teeth" (Matthew 25:30; see also Matthew 8:12; 22:13).

This ultimate home of the lost is also called "hell," of course, and the Lord called it "the lake which burneth with fire and brimstone" (Revelation 21:8), the sea of "everlasting fire, prepared for the devil and his angels" (Matthew 25:41).

As to the location of this fiery lake, we know only that it is not on the earth. The "beast" and the "false prophet" will be dispatched to the lake of fire before the disintegration of the present earth (Revelation 19:20; 20:11), and all the unsaved not until after that event (Revelation 20:15). The new earth will be one "wherein dwelleth righteousness" (II Peter 3:13). The obvious inference of all this is that hell will be a vast lake of fire somewhere far out in the "outer darkness" of the created universe, possibly in a dark nebula, or even a black hole.

The fire will be real and easily able to destroy bodies, but it cannot annihilate spirits. All men and women have been created in the image of God and God is eternal. He is the Creator, not the de-Creator, and "whatsoever God doeth, it shall be for ever" (Ecclesiastes 3:14). The outer darkness will be "a world of iniquity . . . set on fire of hell" (James 3:6), where all vestiges of goodness and love and light are gone forever. No wonder Jesus urged men to "Fear Him, which . . . hath power to cast into hell" (Luke 12:5).

God's created universe is also eternal with all its multitude of stars, and the lake of fire will occupy only a small, probably remote, region in comparison.

Praise ye Him, sun and moon: praise Him, all ye stars of light. . . . He hath also stablished them for ever and ever: He hath made a decree which shall not pass (Psalm 148:3,6).

And all who are saved—those who believe His word and have received His great salvation through faith in Christ—shall live and praise Him for ever.

And they that be wise shall shine as the brightness of the firmament; and they that turn many to righteousness as the stars for ever and ever (Daniel 12:3).

Although many have chosen the way that leads to outer darkness, there will also be many living forever in the Holy City on the new earth. "And there shall be no night there; . . . for the Lord God giveth them light" (Revelation 22:5). 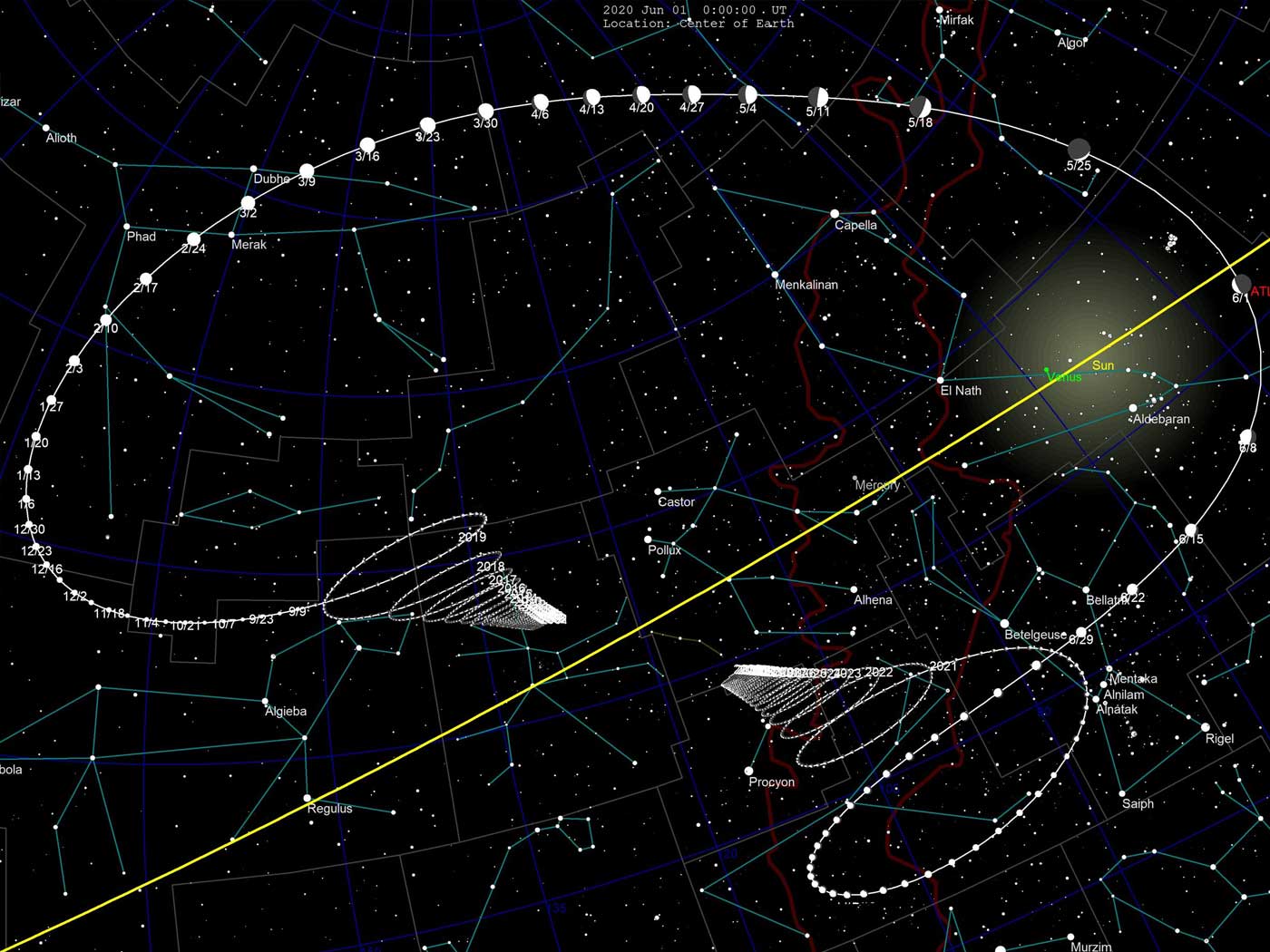 Comet ATLAS: Nighttime Diversion for Isolated Families
For northern-hemisphere families in isolation due to the coronavirus pandemic, a recently discovered comet may provide some needed diversion.1...
BY: JAKE HEBERT, PH.D.

Carl Sagan's Pale Blue Dot
On December 6, 1994, Carl Sagan, author of Cosmos, well-known astronomer and speaker, appeared before the Commonwealth Club of California in San Francisco...
BY: LARRY VARDIMAN, PH.D.
Creation by Inflation and Quantum Fluctuation
Our Bible-believing forefathers were very naïve. They had the simplistic notion that God was omnipotent and truthful. In their unsophisticated view...
BY: HENRY M. MORRIS, PH.D.