One of the leading arguments used to support the concept that apes—particularly chimpanzees—and humans descended from a common ancestor is the “chromosome 2 fusion model.” This scenario involves the claim that the end-to-end fusion of two small chimpanzee-like chromosomes (now called 2A and 2B in chimpanzees) formed one stable large chromosome in humans (chromosome 2). This is thought to explain the difference in the 23 chromosomes humans have and the 24 chromosomes found in great apes.1 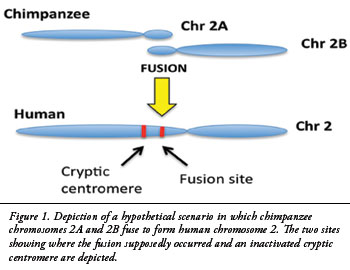 According to the evolutionary interpretation, this fusion took place at some point after humans and great apes split into different evolutionary branches. Figure 1 presents a pictorial depiction of this hypothetical event. A majority of the data for the fusion model is based on indirect laboratory techniques that were commonly used prior to the revolution in genomics, before DNA sequencing became routine and cost-effective. A key article published in 2002 actually analyzed the DNA sequence evidence at the key chromosomal fusion sites in humans and produced more questions than answers.2

Nevertheless, the scientific dogma surrounding the fusion model, which is based more on ambiguous data than solid evidence, persists to this day. In fact, the whole issue is considered to be settled, despite the preliminary DNA sequence evidence that remained inconclusive. As a result of the scientific dogma and the taboo nature of the topic, a silent message of “don’t touch this” is perceived by the secular research community. As a result, the errant dogma remains unchallenged by definitive DNA data…until now.

This author and Dr. Jerry Bergman, a professor at Northwest State College in Ohio, recently completed a new analysis of the scientific literature and available DNA sequence data that seriously calls into question the validity of the fusion model and human evolution in general. Our research on the human chromosome 2 is tentatively scheduled to be published in the Journal of Creation. A brief summary of the major points discovered in this exciting new chromosome 2 research will be outlined in an upcoming issue of Acts & Facts.

In addition, Dr. Bergman’s and my recent study on human telomeres related to chromosomes, evolution, and intelligent design is now in print in the April 2011 Journal of Creation.3 The more science delves into the inner workings of cells, the more clear it becomes that only a Master Creator could be the source of biological life.