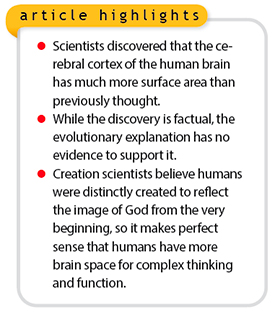 People have been created with a three-pound brain that scientists will never fully understand. Evolutionists have tried to trace the evolution of the human neurological system (including the brain and spinal cord) from supposedly “lower life forms” without success. There is a clear absence of evidence: “Surprisingly, little is known about the evolutionary origin of central nervous systems;”1 “the origins of neural systems remain unresolved;”2 “when and how the animal nervous system arose has remained murky.”3

One of the three major parts of our created brain is the cerebellum, long known to be involved in coordination, regulation of balance, and other motor activities. The cerebellum contributes to our five senses, sits close to the brain stem, and is called by some the “little brain.” Recent research at San Diego State University has shown that the human cerebellum is more complex than realized.4

Until now, the cerebellum was thought to be involved mainly in basic functions like movement, but its expansion over time and its new inputs from cortical areas involved in cognition suggest that it can also process advanced concepts like mathematical equations.5

The researchers revealed some heretofore unknown anatomical information regarding the human cerebellum, but they then attempted to put an evolutionary spin on such discoveries.

“The fact that it has such a large surface area speaks to the evolution of distinctively human behaviors and cognition,” said Martin Sereno, psychology professor, cognitive neuroscientist and director of the SDSU MRI Imaging Center. “It has expanded so much that the folding patterns are very complex.”5

Creationists, on the other hand, would say, “The fact that the cerebellum has such a large surface area speaks of God’s design of distinctively human behaviors and cognition.” Furthermore, since there is no evidence of people evolving from ape-like ancestors, we would say the human cerebellum was designed with very complex folding patterns from the beginning.

Who wouldn’t applaud such ongoing scientific research revealing the mysteries and complexities of the brain? But the evidence does not compel one to draw unscientific connections between people and monkeys. For the evolutionist the only option is to embrace a non-biblical worldview, despite the scientific evidence.

“When you look at the narrative for hominin [bi-pedal apes including modern humans] origins, it’s just a big mess—there’s no consensus whatsoever,” said Sergio Almécija, a senior research scientist in the American Museum of Natural History’s Division of Anthropology.6

The evidence pushes us toward the truth: God created people as people and apes as apes from the beginning.

* Dr. Sherwin is Research Associate at the Institute for Creation Research. He earned an M.A. in zoology from the University of Northern Colorado and received an Honorary Doctorate of Science from Pensacola Christian College.