Guard what was committed to your trust, avoiding the profane and idle babblings and contradictions of what is falsely called knowledge—by professing it some have strayed concerning the faith. (1 Timothy 6:20-21) 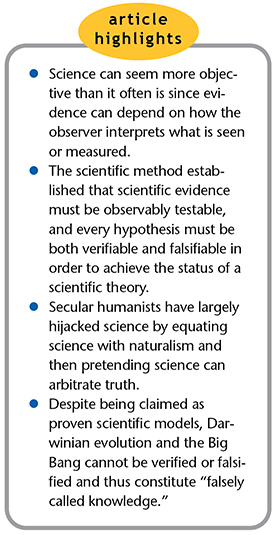 The National Academy of Sciences (NAS) defines science as “the use of evidence to construct testable explanations and predictions of natural phenomena, as well as the knowledge generated through this process.”1 This definition suggests that evidence should be the foundation for science.

But exactly what is evidence? Depending on how it is used, evidence can be an equivocal concept. For example, one person can observe evidence like the geologic rock column and conclude it represents millions of years. But another person can observe the same rock column and conclude that sometime in Earth’s past a catastrophic worldwide flood occurred, moving and depositing extremely large amounts of material into an extensive rock column.

Evidence, as legally defined, can and many times does depend upon how the observer interprets what is seen or measured. By leaving out the subjectivity wrapped up in evidence, the NAS definition makes science seem more objective than it often is—especially when used to reconstruct past events.

As originally conceived by the founders of the scientific method in the 17th century, the scientific method established a process for evaluating the relative merits of explanations of observations and repeatable experimental data. This process consists of using observations and previously established scientific laws to construct hypotheses and/or models in order to explain and predict natural phenomena. If the hypotheses use reasonable assumptions and stand the test of time and repeatable experiments with no contradictory data appearing, then they can advance to the category of a theory of science, but they must be testable.

Like a hypothesis, if a theory stands the test of time and rigorous repeatable experiments with no contradictory data, then it can eventually advance to the category of a scientific law. This is the hierarchy of ideas that the founders of the scientific method established to explain natural phenomena. It was meant to institute order in the way we approach science and to avoid the deleterious effects of popular but indefensible models being accepted into science.

Science was never intended to be a great club wielded by any group with an agenda. Yet this is exactly what we observe in today’s world. Secular humanists have largely hijacked science by equating science with a philosophy called naturalism;2 then they pretend science can somehow arbitrate all truth.

It is easy to see the logic here. If science equals truth and naturalism equals science, then naturalism equals truth. However, science can only speak to natural phenomena, so the premises are flawed. Science has almost nothing definitive to say about history, morality, ethics, belief, religion, philosophy, or societal issues. In spite of this, naturalism, masquerading as modern science, has surreptitiously replaced ancient history by championing popular hypotheses such as Darwinian evolution and the Big Bang as proven models. These two ideas are not only in direct contradiction to the eyewitness account of Genesis, but each contradicts at least one known law of science.3

How should we as believers respond to this intrusion of “falsely called knowledge”? The scientific method as originally developed would maintain that any hypothesis/model that clearly contradicts established scientific laws—or that lacks overwhelming observational and reproducible experimental data to support it—must be rejected.

We can be thankful for the blessings of technology that the scientific method has brought us, but we must reject Darwinian evolution and the Big Bang models. These hypotheses should be set aside not only because they contradict the clear testimony of Genesis, but also because they are falsely called knowledge.