In early spring 2011, crop yield in Missouri farmland along the Mississippi River looked promising, with rows of plants just beginning to grow. But record rainfall threatened to overfill the river and flood Cairo, Illinois. The U.S. Army Corps of Engineers was forced open a levee near Bird's Point in southeastern Missouri, upstream of Cairo, to relieve the swollen river. The resulting flood displaced acres of earth, leaving behind gullies and rills that resemble small versions of desert areas out west.

The estimated damage to Missouri farmland has surpassed 100 million dollars.1 In a University of Missouri news release, agriculture professor Gene Stevens argued in favor of restoring the farmland to a usable status as soon as possible, since "the counties bordering the Mississippi and Missouri rivers account for almost 60 percent of the state's corn and more than 52 percent of soybean production."2

The university's news site featured photographs showing the dramatic damage.3 Gullies were scoured out, leaving behind earthen towers. Recent Texas floods produced similar topography.4 If local floods can carve small steep-walled valleys and leave behind miniature plateaus, then massive continent-wide floods might be expected to carve similar structures on a much larger scale. 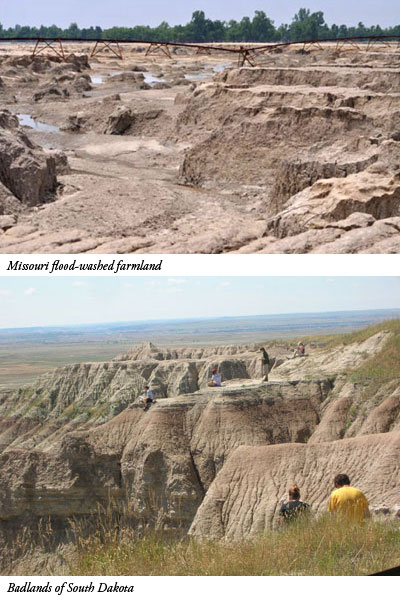 The Missouri flood-washed farmland compares visually with areas in Arizona and elsewhere, including the Badlands in South Dakota. Could some of these immense gullies and plateaus have been carved by enormous floodwaters that drained from the continent into the ocean basins?

If so, then these western landforms reflect the truthfulness of Psalm 104, which states that God "laid the foundations of the earth" at creation, then "coveredst it with the deep as with a garment: the waters stood above the mountains" during the Flood. Then, "at thy rebuke [the waters] fled; at the voice of thy thunder they hasted away. They go up by the mountains; they go down by the valleys unto the place which thou hast founded for them."5 And the floodwater's exodus would have carved steep-gullied landscapes such as those in evidence today.

Just as the 1980 eruption of Mount St. Helens did before this,6 ongoing geological and meteorological events continue to point to an earth that was catastrophically shaped by a global flood.