Secular scientists claim the Hawaiian Islands are millions of years old based primarily on radioisotope dating. Yet, the landforms and measured erosion rates tell a far different story—a story that better matches the Bible. 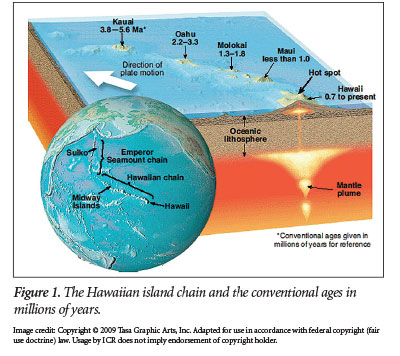 The Hawaiian Islands are a chain of islands in the middle of the Pacific Ocean on the Pacific plate (Figure 1). The conventional explanation is they formed as a result of volcanic activity as the plate passed over a “hot spot” in the mantle at a rate of inches per year (Figure 2). As the islands moved off the hot spot and their volcanoes became inactive, they left a trail of progressively older volcanic islands in the northwesterly direction of plate motion (Figure 1).

In contrast, creation geologists attribute the formation of the islands to recent activity during the Flood. Geophysicist John Baumgardner demonstrated that the plates would have moved much more quickly in the Flood—at rates of several yards per second—creating the Hawaiian Islands just thousands of years ago.1 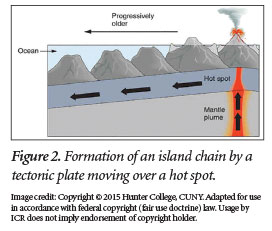 The rocks and landforms of Hawaii also tell a different story from the secular version. Lava tubes and waterfalls, common on all the islands, are evidence of youth. Lava tubes form as natural conduits to transport molten lava, but today they are merely hollow, cave-like “pipes.” These tubes cannot exist for millions of years without collapsing. Steep valleys, steps, and waterfalls should have long eroded away, forming a gentle, subdued landscape over the course of millions of years. Yet, we still see lava tubes, steep valleys, and dramatic waterfalls on all the islands.

We also observe extensive layers of lava on every island. Stacked lava layers are evidence of rapid volcanic deposition, placing layer upon layer, with no evidence of time or erosion between any flow.

But the strongest evidence for a youthful Hawaii comes from the measured erosion rates along the coastlines of the islands.2 Scientists studying photographs and maps since 1900 found that most beaches on Kaua‘i, O‘ahu, and Maui experience erosion averaging 0.4 feet/year, or about five inches per year. United States Geological Survey Director Marcia McNutt explains:

The inevitable fate of the Hawaiian Islands millions of years into the future is seen to the northwest in the spires of French Frigate Shoals and the remnants of other once mighty islands, ancestors of today’s Hawaii, but now sunken beneath the sea through the forces of waves, rivers, and the slow subsidence of the seafloor.3

This erosion process would completely destroy the islands in only a few hundred thousand years. Doing the math, we get 76 miles of erosion in only one million years (at 0.4 ft/yr), which would completely eliminate the islands—except possibly the Big Island where volcanism is still occurring since it currently sits on the hot spot. If the islands are really millions of years old, they should have eroded beneath the sea long ago.

Secular science cannot claim there was not an ocean around the islands to prevent erosion in the past. Nor can they claim renewed uplift and mountain building as a rescuing device to preserve the islands.4 As each of the islands move off the hot spot (Figure 2), they cool, sink, and rapidly erode away in just thousands of years. Once off the hot spot, there is simply no new lava source to keep them “afloat.”

However, if they are only around 4,500 years old, then the islands have experienced about a third of a mile of erosion. And that is precisely what we observe. The Hawaiian Islands really are young.