After a 33-year hiatus, we have a message from Mercury. On January 14, NASA's MESSENGER spacecraft (MErcury Surface, Space ENvironment, GEochemistry, and Ranging) sent the first close-up images of the innermost planet since Mariner 10 completed its last rendezvous in 1975. MESSENGER,1 built and operated by the Johns Hopkins Applied Physics Lab, did not fail to maintain tradition--i.e., surprising scientists.

Analysis of the amazing close-ups from MESSENGER is still in its preliminary stages. This article will review some of the more interesting and unusual findings that may be of interest to creationists.

Mariner 10 showed Mercury to be heavily cratered, with a particularly large basin (Caloris) that was hit so hard, the impact appears to have deformed the opposite side (antipode). Mercury's apparent similarity to our moon is misleading. It is actually very different. One contributor to The New Solar System said in 1999, "Mercury remains an enigmatic planet, a world of extreme contrasts and unexpected surprises. Just when scientists believe they understand what is happening on and within it, innovative observations probe a little deeper into Mercury's secrets. And each new revelation seems more improbable than the last." Its high density, for instance, "cannot be explained by our current models of condensation and accretion…."2 Although it must have a huge iron core, very little iron is detectable on the surface. 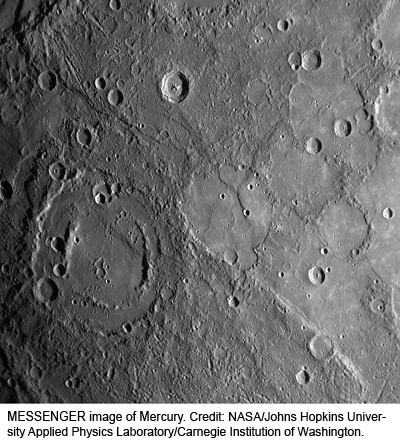 Among the planet's most unexpected features is its global magnetic field. Mercury should not have a magnetic field. According to the secular consensus, a planet needs a molten interior for convection to generate a magnetic dynamo. Sean Solomon, writing in Science last year, described the surprise when Mariner 10 detected the magnetic field: "With a mass about 5 percent that of Earth, Mercury had been expected to have cooled internally to the point where either the core had solidified or core convection no longer occurs."3 Another paper in the same issue proposed a workaround by importing sulfur from throughout the primordial nebula to lower the melting point.4 This was clearly an ad hoc solution.

MESSENGER imaged parts of the planet not seen by Mariner 10, and saw everything with much higher resolution. Right away, the astonishment began. The Caloris Basin was larger than thought, and one side of it appeared "younger" than the other. Many large crater floors appeared flat, suggesting volcanic activity had occurred subsequent to cratering. Inside some of the basins, ghost craters are visible. These must have been quickly infilled by volcanic flows.

Many "young" craters appear fresh with bright rays, but others are ringed in dark material. A spider-shaped series of radial cracks was found. Two new classes of craters, some with dark halos and one with a bright floor, defy explanation at this time. The abundant secondary craters confuse any attempts to date the surface.5

In summary, expectations were shattered--again. Mercury now looks complex, dynamic, and younger than billions of years. This is a common experience in planetary exploration. Bob Strom, the only scientist who worked on both Mariner 10 and MESSENGER, said of the January encounter, "It dawned on me that this is a whole new planet we're looking at. Every part of this planet, ‘seen' or ‘unseen,' is new."6

MESSENGER will be back in October 2008 and September 2009 before settling into orbit in 2011. Planetary scientists enjoy surprises like masochists enjoy pain. Their theories suffer, but it keeps them occupied. "The best is yet to come," not only for theory torture, but for opportunities for alternative views. The heat's on for theorists. Keep your eye on the rising Mercury.