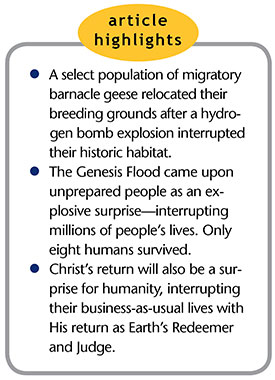 Sometimes “business as usual” is interrupted by an explosive surprise.

For many years, Novaya Zemlya, a group of Russian islands in the Arctic Ocean, provided a calm breeding habitat for a population of barnacle geese (Branta leucopsis).1 For these geese (also called Hvitkinngås, meaning “white-cheek goose”), business as usual was interrupted on October 30, 1961, when the USSR tested “Ivan” (the “Tsar Bomba”). This RDS-202 hydrogen bomb was the largest man-made explosion ever detonated in history. Thankfully, Novaya Zemlya’s barnacle geese had already migrated south before the explosion. Apparently during the following spring (when migratory geese returned north for breeding), they sensed something was wrong, so they relocated new nests to the Baltic Sea’s northern shores, more than a thousand miles south. They now spend summers at the islands and coastlands of Scandinavia and Estonia, and they spend winters in and around Holland.1

To creationists, who repeatedly refute uniformitarian assumptions, the Genesis Flood illustrates this same reality. The normal lives of Noah’s family and everyone else on Earth were “explosively” interrupted by a devastating flood.

Even the Lord Jesus Christ’s allusion to the “days of Noah” illustrates how the Genesis Flood clashes with uniformitarian thinking. The Lord emphasized this point using words that surely surprised His audience.

This description of the days of Noah was not what Christ’s immediate audience expected, because they pictured that time as wicked, evil, and “filled with violence” (Genesis 6:5, 11-13), and it was. However, Christ described Noah’s “business as usual” days—people eating, drinking, and getting married (Matthew 24:38; Luke 17:26-27).

Likewise, when Christ compared His return to Earth to “the days of Lot,” His immediate audience likely pictured the vileness of Sodom and Gomorrah (Genesis 18). Yet, Christ described the days of Lot as a time of people eating, drinking, buying, selling, planting, and building (Luke 17:28-29). In other words, Christ described it as business as usual—a group of people living carelessly, ignoring God, and not expecting an explosive interruption.

Today, Scripture-scoffing secularists ignore God and His promises, including His promise to return to Earth in judgment, just as they routinely reject Earth’s geological history as the result of the Genesis Flood (2 Peter 3:1-7). But Earth’s geological past hasn’t been a uniformitarian business-as-usual history. Rather, it was enormously marked by the Genesis Flood, an inescapable fact that creation scientists have detailed time and time again.2

We need the historical and authoritative witness of the Genesis record so we can know with confidence what really happened during the days of Noah, because Earth’s history hasn’t always been “business as usual.” Christ surprised the world with a global flood once, and He will interrupt daily routines again on some future day when He returns to Earth as Redeemer, Judge, and King of our world.