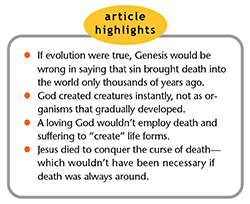 Cancer took the life of both my dad and a friend in the last several months. Death certainly injects misery into the joys of life. I know we must die, for “the wages of sin is death” (Romans 6:23) and “all have sinned” (Romans 3:23), including me. However, some Christians think God used evolution’s eons of animal death and natural processes to generate the first humans. How can sin have caused death if death was happening for millions of years before sin even started?

Naturalistic explanations do a poor job of explaining the impact of death on our lives. Natural factors like droughts and predators offer no explanation for why it hurts so much when loved ones die. Nor do they explain why the Lord Jesus had to die to redeem us. Real sin, not natural processes, must underlie death.

The view that God used eons of death to create us suffers at least three faults. First, it contradicts plain statements in God’s Word. Genesis 1:25 says, “And God made the beast of the earth according to its kind.” God made Earth’s land creatures through miracles, not nature. Or take Psalm 146:5-6, which refers to “God, who made heaven and earth, the sea, and all that is in them.”

The New Testament introduced God as the only one with the power to create something from nothing, saying, “All things were made through Him, and without Him nothing was made that was made” (John 1:3). However, we were made “without Him” if natural processes made us instead of God. Who has ever seen natural processes engineer complicated structures from scratch, anyway?

A second fault of pinning all that supposed death on our Creator is that it diminishes His loving character. Why worship our Savior as a loving Creator if He used such unloving methods as evolution’s death of the weak and survival of the fittest for sooooo long? Revelation 21:4 says God will recreate a world where “there shall be no more death.” Our experiences with death in this life propel us to anticipate even more the goodness of that everlasting life.

Finally, the view that animals evolved into humans erases the logical foundation for the gospel. Evolution teaches that animals died for millions of years to finally produce the first people. Placing death before sin makes death seem natural and normal. If so, then why does it hurt so bad when loved ones die? And why does the gospel teach that the Lord Jesus suffered death to abolish it for us?1

In short, Jesus solved our death problem by paying our sin penalty—not some natural selection penalty. This makes good sense given the true history recorded in Genesis. The apostle Paul referred to that history when he taught, “Through one man sin entered the world, and death through sin, and thus death spread to all men, because all sinned” (Romans 5:12). Death before sin (and thus not because of sin) reduces Christ’s work on the cross to foolishness.2

Why not take God’s plain statements over human guesses about the distant past? This way we can know God’s love. Seeing sin as the cause of death makes perfect sense of the gospel.