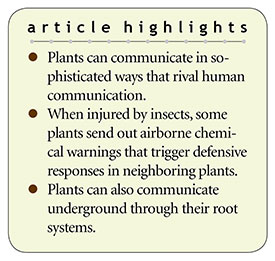 Modern societies exchange important information through high-tech communication systems with state-of-the-art wireless and hard-wired networks. While humans have only accomplished this feat in recent history, the seemingly lowly plant kingdom has been doing this since creation. Surprisingly, communities of plants contain both wireless and hard-wired communication systems that rival man-made computer networks. The plants’ systems employ incredible ingenuity that only an omnipotent Creator could have engineered.

These all-or-nothing complex systems are impossible to explain through bit-by-bit random evolutionary processes.

One recent discovery in a commonly studied weedy plant called Arabidopsis may make you think twice the next time you prune your shrubs or mow your lawn.1 When this plant is wounded, typically by an insect, it sends out an airborne chemical signal to its neighbors to warn them of danger. When the signal is received, it triggers a whole host of incredible responses. Immediately, the forewarned uninjured plants show a marked increase in root growth to obtain more soil nutrients to strengthen their defenses. In addition, the plants produce more of a chemical called malate that attracts beneficial soil microbes that bond with the roots, also increasing the plants’ defenses.

If this type of wireless communication system used by plants above ground weren’t impressive enough, scientists have also discovered a hard-wired network that’s even more incredible because it utilizes an underground fungus as a data conduit.2,3 This highly efficient system acts as a kind of natural biological internet that allows entire communities of plants to readily and effectively communicate as a group.

Scientists had known for some time that mutually beneficial relationships exist between plants and certain types of fungi that colonize the soil around plants’ roots. These beneficial soil microorganisms known as mycorrhizal fungi help promote the plants’ overall health and growth. The mycorrhizal fungi also enhance the plants’ ability to cope with insect attacks, pathogens, and drought stress.

But these fungi play yet another role. As it turns out, plant-to-plant communication takes place through the release and detection of small molecules that traverse the soil through mycorrhizal networks. These function as information superhighways connecting each of the plants in a community. The plants have built-in code-and-decode programming information to decipher what the different chemical combinations or concentrations mean. This amazing function is enabled by the thread-like fungus that grows underground like the fiber-optic network connecting computers in an office building. When plants detect insects such as aphids piercing them and sucking out their juices, it triggers the release of specialized chemicals that not only help repel the aphids but also attract certain types of wasps that feed on aphids. Remarkably, the damaged plants are able to signal others connected through the fungal network to produce the same defensive response.

Both of these comprehensive communication systems require the same sort of general mechanisms that human-engineered computer systems use. Specialized cellular machinery and logic are employed to not only compose the information-based message but send it through either the air or the fungal network. To transmit the message, highly specialized airborne molecules are used for the wireless communication, while specific types of informational chemicals along with the high-tech fungal conduit are used to convey the hard-wired data delivery underground. On the receiving end, highly specialized sensors, interfaces, control systems, and logic put in motion a whole cascade of specific defensive responses.

Plant communication systems are incredible examples of God’s handiwork in His creation.

These all-or-nothing complex systems are impossible to explain through bit-by-bit random evolutionary processes. Plant communication systems are incredible examples of God’s handiwork in His creation.