The Museum of Nature & Science in Dallas is currently running an exhibit called "Chinasaurs" that features dinosaur fossils discovered in China. Some of these fossils supposedly represent transitional species from dinosaurs to birds. But these "feathered dinosaurs" appear to be missing a key feature—namely, the feathers.

On a web page promoting the Chinasaur exhibit, Dr. Anthony Fiorillo, the chief paleontologist at the museum, said:

Also, there are a couple of [Chinese fossil] sites that have remarkable preservation, including an area that has produced numerous skeletons of birds and non-bird dinosaurs that preserve traces of their feathers around the skeleton. That's gone a long way in changing our idea of 'the look' of dinosaurs.1 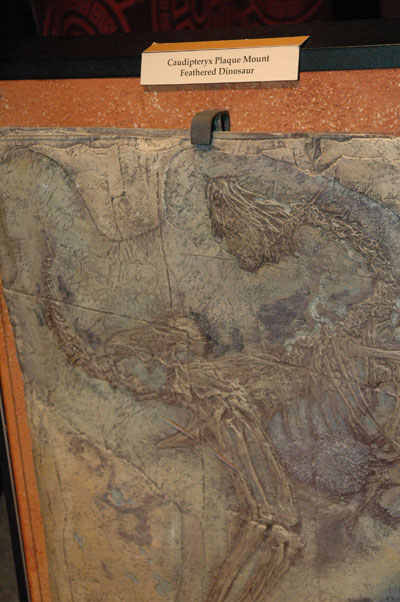 But rather than showcasing real feathered dinosaurs, the exhibit only offers displays that don't provide any evidence for "the rise of birds from among certain dinosaur lines."1 For example, one features a painted fiberglass facsimile of the in-situ fossil of the "feathered dinosaur" Caudipteryx. Oddly enough, the model had no clear indications of either fibers or feathers. Is this kind of display adequate to support such a key part of the evolutionary story on the origin of birds?

Caudipteryx did not have a bird's keel bone or a bird-like beak. And unlike birds, it had hips that permitted free movement of its thighs.2 Thus, it was most likely a dinosaur, not a bird or a transitional form. No reptiles have feathers today—only birds do. Were any fiber-like impressions found on the original fossil caused by something other than feathers? Perhaps they were artifacts of the fossilization process, or partly decayed skin fibers.

In fact, evolutionist Alan Feduccia reported that fiber-like features in fossils look just like collagen fibers from his experiments with decayed skin.3 If "dinosaur feathers" are not feathers after all, then the only evidence that could possibly be interpreted as favoring bird evolution would not even exist.4

The Chinasaurs exhibit offered no real science to back up its grand claim that some kind of dinosaur evolved into a bird. Instead, painted illustrations of what feathered dinosaurs "may have looked like"1 only illustrate evolution's feathered fairy tale.