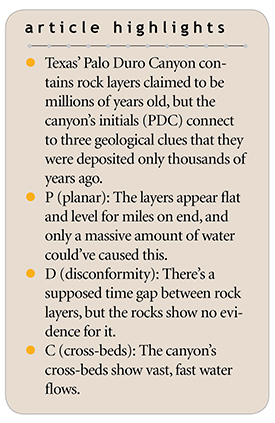 Some friends and I recently hiked into Texas’ Palo Duro Canyon, where sedimentary rock layers span the horizon. Eighteenth-century naturalists thought rock layers represented vast ages, a tradition most scientists still cling to. We looked for evidence of deep time in the rocks but instead found three mysteries that Noah’s recent Flood explains more readily than long ages.

These three mysteries fit the initials of Palo Duro Canyon. The first letter, P, stands for planar. The upper surface of each major sedimentary rock unit looks as though some immense giant smoothed it flat with a colossal carpenter’s plane.

Today’s rivers carve V-shaped channels into the subsurface. When flooding creeks or rivers overflow, they don’t leave sediments across wide areas but only along or near their river banks. In contrast, sediments lie flat for miles across Palo Duro Canyon and beyond. We saw no trace of river channels in the layers. Water blanketed whole states to deposit the flat, planar beds of sediment.1

D stands for disconformity. This represents a supposed time gap between two parallel layers even when there’s no physical evidence of elapsed time between them. Palo Duro Canyon layers show two enormous disconformities. 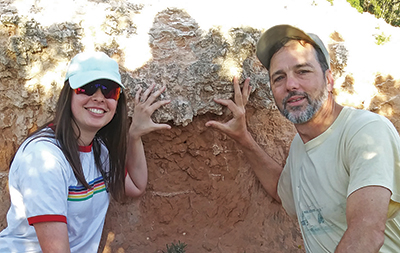 First, if we extend today’s slow and gradual worldwide erosion rates into the past, then the world’s continents would have eroded into the sea in that amount of time.3 Why do we still have continents with canyons instead of a water world? Second, even super-slow erosion rates in the past would carve valleys, rills, and ravines into the Quartermaster. The flat-topped rock shows no such chevron-shaped features.

Neither do the Trujillo and Ogallala Formations—the next-highest in the canyon. The supposedly 10-million-year-old Ogallala, the caprock that forms the canyon’s upper rim, stretches from Texas all the way up to South Dakota.4 My daughter Abby and I could span our hands across this assumed 200-million-year gap. A total lack of ruts or ravines refutes this missing time. It’s as though the Ogallala landed on the Trujillo within years or even days.

The third mystery—the C—concerns cross-beds. This describes grains deposited at an angle to the horizontal. Cross-beds form at small scales today in river channels, offshore seafloor sand dunes, desert sand dunes, and in laboratory flume studies. Sometimes cross-bedding is faint, and other times it shows bold colors. All cross-beds indicate fast-flowing sediment, with taller cross-beds indicating deeper waters. And any cross-beds with an angle of less than 25°, like those in the canyon, indicate water formation, not wind formation.

Noah’s Flood solves all three Palo Duro Canyon mysteries. The broad, planar layers surely formed from widespread waters rather than river channels or sloping seaside surf zones.5 By erasing imaginary millions of years, the disconformities disappear, with no trace of erosion between the layers’ flat contacts. Last, cross-beds show that fast-flowing waters once blanketed the whole region, which is what we would expect from a world-covering flood. The Flood really happened, just like the Lord Jesus taught.6