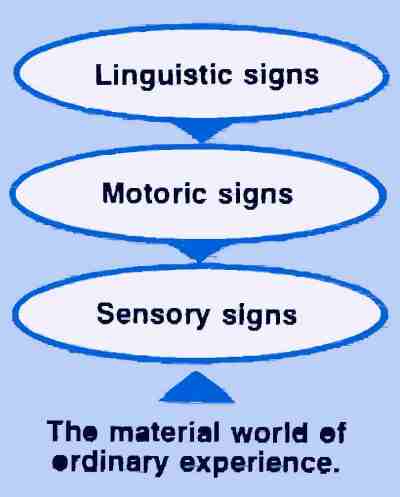 Signs are objects, actions, or marks standing for things besides themselves as in figure 1. Signs in ordinary experience are (1) sensory, (2) motoric, and (3) linguistic. To the extent signs are consistent with what they are about, they are meaningful. Sensory signs are about material facts and depend on seeing, hearing, touching, smelling, and tasting. Motoric signs involve relations between animate agents (things or persons that move) and material facts known through sensory signs. Linguistic signs deal with all the foregoing.

Figure 2 shows how signs relate to each other in ordinary experience. What enables signs to be understood is their consistency with the material world. For instance, the sensory sign of the baby is understood because it is consistent with what a baby looks like. In the middle circle,the pointing finger shows that I directed your attention to the baby. Such an act of reference is a common motoric sign. On the right side are linguistic signs—The baby is looking at you. Linguistic signs depend on consistency of conventional use, i.e., on the grammar of a language. We call objects like the one at the left, a baby, and such acts as the baby is performing, looking at you.

Where does the idea of mere consistency originate? It cannot come from imperfect measurements or statistical observations in the sciences. In experience, it is absent. We make errors. Our representations are often imperfect. So where does mathematics get the idea that it is possible to use signs in a strictly consistent way?

The sciences (including mathematics itself) give no answer to this question, but the Bible points to One who cannot lie (Numbers 23:19; Titus 1:2)—the same yesterday, today, and forever (Hebrews 13:8). If God exists, He is the source of all perfections (James 1:17). In the 19th century, Charles S. Peirce (1839-1914) showed the way toward a mathematical theory of signs grounded in mere consistency and nothing else.

Stories, of course, unfold over time and true ones must be connected to the whole continuum. Jesus put volumes in simple parables. If Jesus was consistent, based on His command to let our yes be yes and our no, no (Matthew 5:37), the stories He told must have been true. If the events referred to occurred, the actors existed, and did what was attributed to them. If the prodigal came home and was received by his father, as the story says, then it is as true as it can be. It is a true narrative representation (TNR). In all TNRs, relative to the facts portrayed the words do not demand any more nor less than the facts deliver, and the facts do not contain anything inconsistent with the words. Therefore, the words are exactly as true as they claim, forever.

More than this (or less) would violate mere consistency. I have proved that TNRs (Oller, 1993, 1994, 1996) form the only basis for the meanings of all other signs including fictions, fantasies, errors, illusions, hallucinations, deliberate lies, and generalizations. The argument gives results that are astonishingly consistent with the Bible and creation.

Oddly, it is skepticism itself that provides a freeway to our destination. All skeptics such as David Hume (1711-1776), Bertrand Russell (1872-1970), and present-day "postmodernists" claim that belief in anything is doubtful in the end. But, relying only on mere consistency we can prove them wrong. A skeptic says, "I prove by these signs, either that no signs exist or that their existence is doubtful." For every possible argument of this form, signs are employed and the argument is absurd. Therefore, we cannot doubt that signs exist. But suppose the skeptic tries to call bodily material objects into doubt by argument. For every such argument, the signs employed are themselves distinct bodily objects and are attached to distinct bodily persons. All such arguments are absurd. Therefore, bodily objects cannot be doubted. But suppose the skeptic argues against meaningful conventional relations between signs and bodily objects in space and time. Again, every such argument depends on such meaningful relations as it aims to doubt. All such arguments are absurd. Thus, meaningful relations between signs and objects cannot reasonably be doubted.

In the series of proofs just given and all that follow from them, we never take a step without proving it necessary, relying only on mere consistency. Countless empirical consequences follow and those so far tested have come out just as predicted (Oller, 1995). If TNRs did not exist, signs could not be acquired and all meaning would disappear. But to prove this we are not obliged to identify a single representation as a TNR. Therefore, all such extreme doubt without exception is unreasonable. Skepticism in all its varieties (agnosticisms, postmodernisms, deconstructionisms, etc.) is indefensible.

TNRs are more perfect than fictions in one element (the material), than errors in two (both the material and linguistic), and than lies in all three. Thus, TNRs are the only signs that (1) determine factual material content, (2) correctly connect that content with space-time, and (3) generalize to all contexts like the one at hand. Thus, TNRs contain inexhaustible meaning and are the only source for the meaning in fictions, errors, lies, and all generals (including numbers, equations, musical notations, etc.).

All of the foregoing relates to the Biblical narrative in interesting ways. If the Bible is true, since it extends from creation to the end of time, it must be the basis for all TNRs without exception. If each of them is connected to space-time, and the Bible covers all of it, all of them are connected to the Bible. If the Bible is true, all proofs must be consistent with it. The Bible marks off the only material ground for any possible arrangements of chaos, lies, errors, fictions, sins, and all meaningful generals.

Take as a test the requirement of faith (Habakkuk 2:4; Romans 1:17). Do our proofs escape this requirement? Not at all, rather they depend absolutely on faith in mere consistency. If that consistency could be fully demonstrated ahead of time by mathematics, science, or human experience, our proofs would be inconsistent with the Biblical demand for faith. Or, if we could prove the Bible itself, such a proof would eliminate faith and be inconsistent with the Bible. But a proof of the Bible would require access to the full scope of time. This has been denied since the curse of sin (Genesis 3:24) and though nothing in the past or future is hidden from the Creator, it is fairly well hidden from us. So the test of faith sustains our proofs.

The final question is whether the Biblical narrative is merely consistent. If the Biblical narrative is consistent, believing it involves less risk than any other alternative. Belief is more subject to criticism and testing than any other possibility. David says, "Taste and see that the Lord is good" (Psalm 34:8). Recalling Pascal's wager: without God we are either dead in sin, or dead. Either way, we're dead. What's the risk of faith in God when we stand to gain more than all this universe?

_____. 1994. Coherence in comprehension, communication, and language acquisition: Transcending the postmodern condition. English Teaching: The Korea Association of Teachers of English 49:1-40.

_____. 1996b. Semiotic theory applied to free will, relativity, and determinacy: Or, why the unified field theory sought by Einstein could not be found. Semiotica 108/3-4.

* Dr. John Oller, Jr. is Professor of Linguistics at the University of New Mexico and also an ICR Board Member.