Dinosaur Mingled with Sea Creatures in Japan | The Institute for Creation Research
Skip to main content
NEWS     CREATION SCIENCE UPDATE     FOSSILS SHOW RAPID AND CATASTROPHIC BURIAL
Dinosaur Mingled with Sea Creatures in Japan
BY BRIAN THOMAS, PH.D. *  |
TUESDAY, SEPTEMBER 24, 2019
Each time a fossilized creature with legs is found mingled with fossil sea creatures, a new quandary for evolutionary history presents itself. When the same situation surfaces many times, that quandary multiplies. Discoveries like a new and relatively complete hadrosaur from Japan keep testing secular scientists’ skills to imagine ways whole dinosaurs could have fossilized. These findings also happen to make slick-fitting pieces of the Bible’s picture of the past.

Researchers published the hadrosaur’s detailed description in the online journal Scientific Reports and named the fossil Kamuysaurus japonicus.1 Hadrosaurs, known popularly as duck-billed dinosaurs, had plant-eating teeth and jaws and could walk either on their hind legs or on all four legs. Subtle differences justified this dinosaur’s new name, although it looks basically the same as Edmontosaurus-types found in North America, Russia, and China.

A Hokkaido University press release via EurekAlert noted that the remains were found in “marine deposits.”2 The team suggested that it “preferred to inhabit areas near the ocean.”2 Mingled fossils included sea creatures like “ammonoids, mosasaurs and a sea turtle.”1 The hadrosaur didn’t have fins or flippers, so what was it doing there?

Figure 7 of the report includes an illustration of a dramatic scene of the Japanese hadrosaur dead and floating belly-up in a still sea with living sea creatures. Gizmodo also reported on this find, saying, “The researchers speculate that its carcass floated out to sea, eventually falling onto the seafloor, allowing it to be preserved in sediment.”3

This “floated out to sea” explanation doesn’t wash—we’ve heard this speculation before. It raises the same three unanswered questions in Japan as it does in Montana,4 the western United States5,6 including Colorado,7 Canada, (where a dinosaur “wasn’t supposed to be there”8), England,9 the rest of Europe,10 Morocco,11 (where a dinosaur discovery was “like hunting for fossil whales and finding a fossil lion,”)12,13 the Pacific coast from California to Alaska,14 Mongolia,15 and who knows where else. 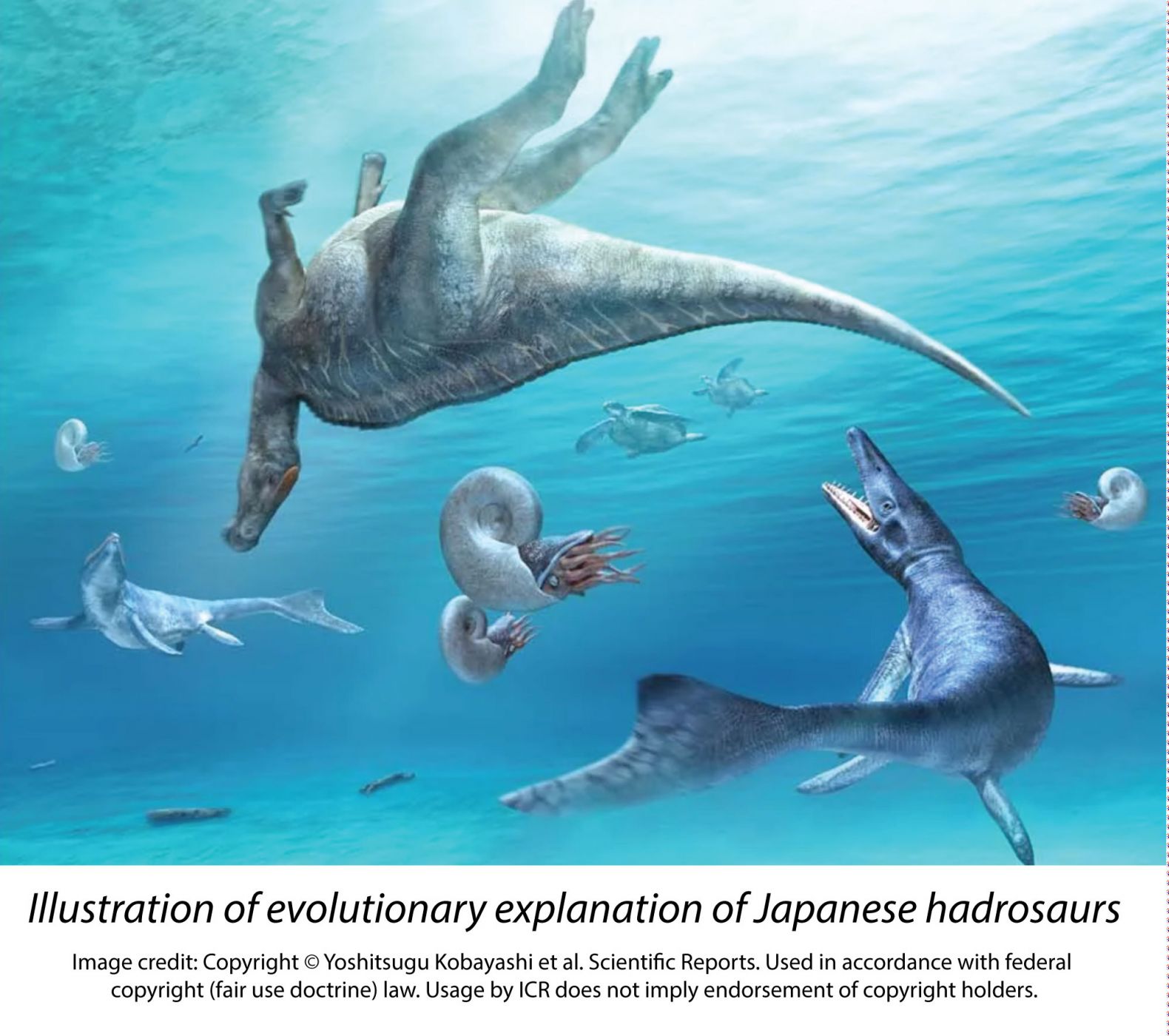 First, if these animals got washed out to sea, then what kept them from getting scavenged? Whether just bones like this hadrosaur or a mummified carcass like a nodosaur described in 2017,16 many of these fossils don’t show so much as a tooth scrape from a would-be scavenger. In any normal setting, carcass-feeders like clams and osedax worms would have recycled their bodies in days or months at most.

Next, that 2017 nodosaur weighed almost one and a half tons, but this Japanese hadrosaur “weighed upward of 5.3 tons.”3 How bad does the weather need to get to flush that much bulk out to sea? This doesn’t happen today in one location, let alone all over the place.

Last, heavy rains can wash animals to sea, such as cows flushed from Australian floods a few months ago.17 But are they getting stuck in muds with clams, fish, and turtles? Are they turning into whole-body fossils today? Clearly not. We need a much better explanation than they just “floated out to sea.”

The same evidence seen in Japan has already turned up in so many other places—wetland walking dinosaurs deeply buried beside swimming sea creatures. Why not consider one worldwide watery ruin as the most rational solution to this recurring quandary? Noah’s Flood must have entombed Kamuysaurus japonicas at about the same time it did the same thing elsewhere around the world.