The scientists at the Institute for Creation Research made great headway in 2018. Below are some of the projects ICR scientists worked on this past year. 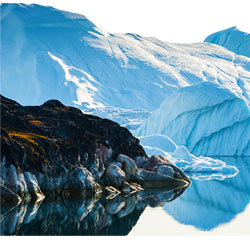 ICR physicist Dr. Jake Hebert’s research continued to refute the astronomical ice age theory. The supposed correlation supporting it in the well-known 1976 paper “Variations in the Earth’s Orbit: Pacemaker of the Ice Ages” depended on an age assignment of 700,000 years for the most recent reversal of Earth’s magnetic field. When secular scientists changed that to 780,000 years, they unwittingly melted their own Ice Age story. After toppling this iconic old-earth argument, Dr. Hebert plans to continue his climate studies, including the climate of the pre-Flood world. 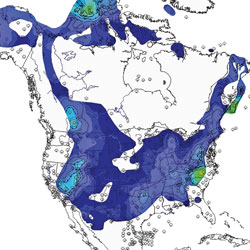 Creation scientists have long speculated on how certain rock layers may correlate with the stages of Noah’s Flood. ICR geologist Dr. Tim Clarey compiled stratigraphic columns using oil well and seismic data from three continents in search of global sediment patterns. The first megasequence rock stack, the Sauk, doesn’t cover pre-Flood ground at all. Deposited early in the Flood year, the Sauk likely represents the effects of tsunamis that transported and deposited sediment across pre-Flood shallow seas and not across land masses. This helps explain why so few, if any, land creature fossils occur in Sauk Megasequence rocks. 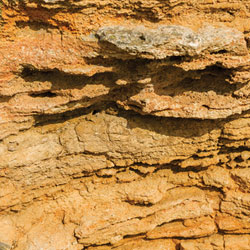 Dr. Clarey’s further research continues to show that contrary to textbook tradition, Earth’s limestone rock layers weren’t laid down slowly over eons. Instead, virtually all sedimentary layers, including mudstones, were deposited by rapid water movement. Secular scientists should reevaluate their adherence to slow processes so they can see how catastrophic processes better explain Earth’s geological history. 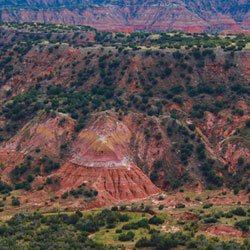 Texas’ Palo Duro Canyon is second in size only to Grand Canyon in the U.S. Flat-lying rock layers stack on top of each other for many miles in all directions. They show no erosion between the layers and thus are missing the time gaps proposed by evolutionary scientists, who want to insert millions of years between each layer. The Ogallala Formation covers about 174,000 square miles across eight states. It’s so evenly spread that it would have required fast-moving water over a huge area, likely from the receding stages of the Genesis Flood. 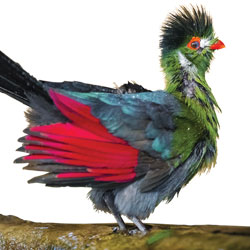 Biogeography is the study of the global distribution of plants and animals. A bird fossil discovered in Wyoming matches a modern bird found only in Africa. This and other evidence reveal evolution’s failure to explain the distribution of past and present life forms. Dr. Clarey and ICR geneticist Dr. Jeffrey Tomkins are working on a biogeography model based on paleontological data and post-Flood migrations. A model based on biblical history better explains the present locations of plants, animals, and fossils. 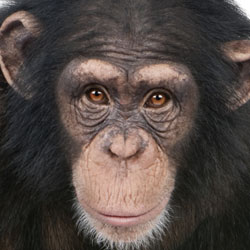 Dr. Tomkins’ research reveals how recent advances in genetics further refute human evolution. Both secular and creation genetics research confirm the same amount of human-chimp DNA dissimilarity: about 15%. Because evolutionists need a difference of only 1 to 2% to make their models seem plausible, the huge chasm in actual DNA differences between chimps and humans is far too great to support the evolutionary story. 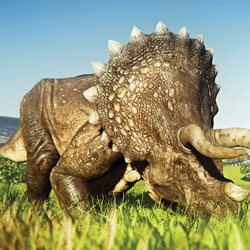 Brian Thomas investigated proteins in fossils. His unpublished research used new techniques to characterize dinosaur and other bone collagen. Initial results show that fossil proteins may be more widespread than commonly believed. This challenges millions-of-years ideas. He also collaborated with the Creation Research Society to evaluate rates of collagen degradation. Look for published information on his results in 2019.

ICR continues to advance research that supports the authority and accuracy of God’s Word.

ICR continues to advance research that supports the authority and accuracy of God’s Word. Thank you to those whose generous support allows us to challenge the evolutionary misinformation so prevalent in today’s world.