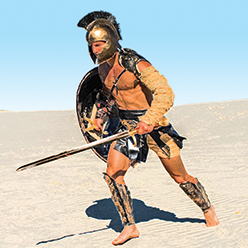 At “six cubits and a span,” Goliath stood over nine feet tall, using a conservative 18-inch cubit. Scripture demonstrates his strength by cataloging the weight of his armaments, including a 5,000-shekel (125-pound) coat of mail.1 No wonder he was the champion of Gath! He was big and strong, but was he fast?

Modern science gives us new ways to examine the history presented in the Bible. Four scientists developed a model that accurately predicts an animal’s top speed based simply on body mass and means of locomotion.2 Their model for land-running animals generally matched most of the measured speeds of over 400 different animals, and even matched some sophisticated speed estimates for dinosaurs, including T. rex.3

At “six cubits and a span,” Goliath stood over nine feet tall.

Energy is the first factor. Animals’ muscles spend stored chemical energy when they run. Once that energy is gone, they must pause and wait for muscle cells to replenish fuel stores. The second factor is inertia, which means resistance to changes in motion. A running animal or person must spend enough energy to propel their whole body mass. Animals eventually reach a size at which their bodies’ inertia counteracts the maximum amount of energy their muscles can store. That’s why great cats can outrun elephants.

Did Goliath reach this “slowing size,” or would his bigger, longer legs have propelled him faster than you?

To answer this question, we first need to recognize that humans run more slowly than animals of similar mass.4 This means that the new speed model does not directly apply to people. We also must satisfy ourselves with educated guesses as to Goliath’s body weight. Most formulas that estimate “ideal” body weight suggest that a man of Goliath’s height should have weighed about 450 pounds. For comparison, Shaquille O’Neal stands at seven feet one inch. He weighed around 325 pounds when he was a fit NBA player, but the ideal body weight for that height is only about 220 pounds. Goliath may have weighed more than ideal estimates.

Modern science gives us new ways to examine the history presented in the Bible.

This exercise carries two messages. First, giant descendants of Noah like Goliath6 would have reached body masses where larger means slower. However, they would not have reached body masses that defied biophysics, leaving them within the realm of biological feasibility and thus biblical reality—not just myth. Giants were probably slower sprinters, and centuries of warfare apparently did them in, but they were once just as real as David’s trust in the Lord when he defeated godless Goliath.