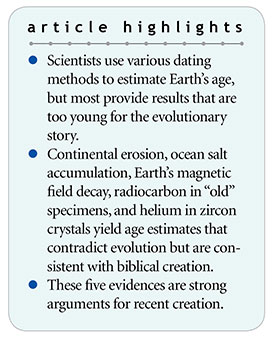 The evolutionary story requires millions and billions of years, and most people assume that scientific dating has conclusively proved such ages. However, most dating methods yield age estimates that are much too young for the evolutionary story, even given uniformitarian assumptions.1 These include estimates that look at the earth as a whole. Such estimates should be more reliable because rates averaged over the entire earth should be less subject to local uncertainties.

In this article, we examine five global processes that strongly indicate a young earth.

Both secular and creation researchers have long noted that the continents are eroding much more quickly than expected in secular thinking (Figure 1):2-5

North America is being denuded [eroded away] at a rate that could level it in a mere 10 million years, or, to put it another way, at the same rate, ten North Americas could have been eroded since middle Cretaceous time 100 m.y. [million years] ago.4 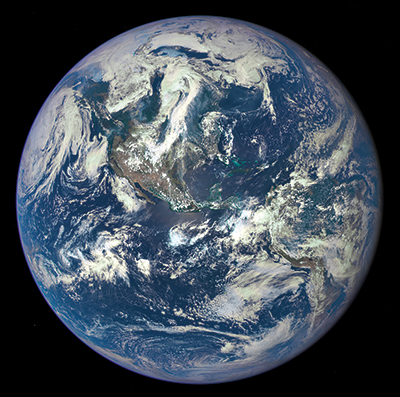 Figure 1. Erosion is occurring so rapidly that the continents cannot be hundreds of millions of years old, let alone billions. Likewise, salt is entering the oceans so quickly that they cannot be more than 62 million years old.
Image credit: NASA

This 10-million-year estimate is comparable to the 14 million years that creation scientists calculated would be needed for all the continents to be planed down to sea level.2 Skeptics have criticized this argument, saying it naively assumes erosion rates have been perfectly constant over time. They also claim it fails to take into account factors such as mountain building and lava flows that can replace some of the eroded material.

Yes, the above calculation did assume a constant rate of erosion, but only to get a ballpark estimate, not to obtain an exact answer. Secular geologists have performed more sophisticated calculations that take into account factors such as climate, slope of the terrain, etc. These calculations still yield erosion rates fast enough to plane down the continents in just tens of millions of years.6,7

But can’t mountain building and tectonic uplift replace the eroded rock? And couldn’t “old” rocks have possibly been protected from erosion by younger overlying rocks that were themselves later eroded away? Can’t these factors explain the survival of the continents?

No. There are a number of problems with these arguments, but the easiest way to see that they don’t work is to recognize that landforms exist that even uniformitarian geologists believe have been exposed to surface erosion for hundreds of millions of years—“an astonishingly long history of subaerial [open air] exposure”8—yet these landforms still exist.

Paleogeographic reconstructions indicate that parts of the Australian continent have been subaerially exposed for hundreds of millions of years. Some landforms and regolith are demonstrated to be at least 300 million years old, but their persistence at or near the surface is inconsistent with long-term denudation rate estimates based on cosmogenic nuclides and apatite fission track thermochronology.8

In fact, “very old” landforms are so common that geologists even have a name for them—paleoforms.9 Professional geologists are certainly aware of mechanisms that could conceivably protect these landforms from erosion, yet one uniformitarian geologist acknowledged:

Paradoxically, however, none of the mechanisms that have been proposed to explain the survival of paleoforms hold here [in southeastern Australia]. These instances may well be typical of large parts of the interior of tectonic plates, and a revision of widely held estimates of modal rates of denudation seems required.10

Human agriculture would increase erosion rates. Could “prehistoric” erosion rates have been lower in the past? Yes, but only by a factor of 10 or so at most, which clearly doesn’t solve the problem.5,11 Despite anti-creationist claims, continental erosion is still very much a valid young-earth argument.

Some of the eroded material contains salt (NaCl), which is continually being added to the world’s oceans (Figure 1). Once dissolved in the oceans, the salt separates into sodium (Na+) and chlorine (Cl-) ions. Creation scientists Drs. Russell Humphreys and Steve Austin used the current amount of sodium in the oceans to calculate how long it would take, starting with a salt-free ocean, for the world’s oceans to achieve their present degree of salinity. They used conservative rates of salt input and made allowances for mechanisms that remove salt from seawater, such as sea spray. They found that the oceans could be at most 62 million years old.12 In fact, revised measurements show salt is entering the world’s oceans even faster than Humphreys and Austin thought.13 This further lowers the maximum possible age.

A sodium-containing mineral called albite removes sodium from the oceans when it forms, so one anti-creationist claimed this fact invalidates these results. Yet, Humphreys and Austin had already considered this possibility.12 Albite decomposes in cool water, replacing the exact same amount of sodium that it removes. So, over millions of years, it would have zero effect on the sodium content of the world’s oceans.14 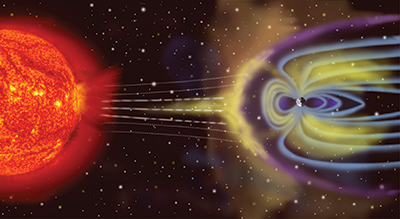 Figure 2. Even after a century of theorizing, uniformitarian scientists cannot explain how Earth’s magnetic field could persist for billions of years.
Image credit: NASA

Evolutionary geologists claim Earth has had a magnetic field for billions of years, yet they have no idea how this is possible (Figure 2). As noted by one geophysicist:

The secular scientists’ problem is their belief that Earth is billions of years old. Magnetic fields are produced by electrical currents, yet these currents grow weaker over time. To maintain such a current would require an electrical generator (dynamo) of some kind within the earth’s interior. But how could such a generator form naturally? Even after a century of research, secular scientists still don’t have a workable dynamo theory.16

Of course, a weakening magnetic field isn’t a problem for biblical creationists, since a decaying electrical current within Earth’s core could maintain the magnetic field for the 6,000 years or so that have elapsed since creation.

Radiocarbon, also known as carbon-14, is an unstable variety of the carbon atom. It’s produced from atmospheric nitrogen when energetic charged particles from space enter the atmosphere. Every living thing has some radiocarbon in it. When it dies, its store of radiocarbon begins decreasing as the radiocarbon transforms back into nitrogen.

Secular scientists are aware of these results and try to argue that the detected radiocarbon is “new” radiocarbon that somehow contaminated the sample. However, the result is so widespread that the contamination excuse quickly wears thin.

Creation critics have also argued that radioactive decay from uranium could transform nitrogen impurities within a nearby sample into radiocarbon. However, scientists had already considered this possibility and showed that it was a woefully inadequate explanation for the measured radiocarbon.18

Uranium impurities in zircon crystals produce both helium and lead through radioactive decay. Creation researchers examined zircons from granite within a borehole drilled at Fenton Hill, New Mexico. Assuming constant decay rates, one would conclude, based on the amount of lead in the zircons, that the crystals are 1.5 billion years old.21 Yet, just as helium leaks out of a balloon, helium also leaks, or diffuses, out of zircon crystals. Although this leakage is much slower than that from a balloon, it still happens relatively quickly.

Leakage rates for a gas through a particular substance depend on something called diffusivity, which varies with temperature. Creation scientists hired an expert to measure how much helium remained in the Fenton Hill zircons. They estimated the diffusivities that would be needed in order for the observed amounts of helium to be retained within the zircons for 1.5 billion years as well as for just thousands of years.21 They then hired a respected laboratory to actually measure zircon diffusivity. Before the experimental results were known, creation scientists predicted in print that the results would agree far better with young-earth expectations than old-earth ones.21 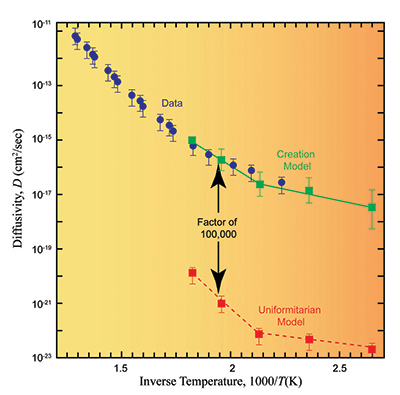 Figure 4.The retention of helium within supposedly ancient zircon crystals is strong evidence for both accelerated nuclear decay and a young world. This chart from ICR’s Radioisotopes and the Age of the Earth project shows how the zircon helium diffusion data line up well with the creation model while the uniformitarian predictions are 100,000 times lower than what was measured.22

That prediction was a resounding success. In order for the observed amounts of helium to be retained in the zircons for 1.5 billion years, the actual diffusivities would have to be 100,000 times lower than what was measured (Figure 4). Either that or the zircons would need to be maintained at ridiculously cold temperatures for long ages.22

So, depending on whether one uses the helium or the lead in the zircons as a “clock,” one could argue that the zircons are either billions of years old or just thousands. The disagreement between these two clocks is itself an argument for accelerated nuclear decay. This invalidates the millions of years coming from radioisotope dating.23 Moreover, one does not expect accelerated nuclear decay to affect diffusion rates. So, this is also an argument that the zircons are just thousands of years old.

Apparently sensing the strength of this young-earth argument, anti-creationists have vigorously attacked it, but not convincingly.24,25 It’s ironic that creation critics claim creation scientists never make predictions, but when we do make an undeniably successful one, they act as if the successful prediction is irrelevant.

Global processes yield maximum age estimates that flatly contradict the evolutionary story. This is true even when we grant generous uniformitarian assumptions. But because these are maximum age estimates, the true ages are in agreement with the Bible’s short 6,000-year timescale, especially when one takes into account the catastrophic processes during the Genesis Flood.