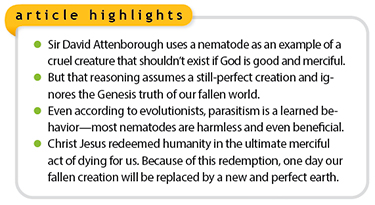 Sir David Attenborough of BBC fame is regularly asked by Christians why he will not give credit to God for the amazing creatures featured on his nature documentaries. He often replies:

My response…is that when Creationists talk about God creating every individual species as a separate act, they always instance hummingbirds, or orchids, sunflowers and beautiful things. But I tend to think instead of a parasitic worm that is boring through the eye of a boy sitting on the bank of a river in West Africa—that’s going to make him blind. Are you telling me that the God you believe in, who you also say is an all-merciful God, who cares for each one of us individually, are you saying that God created this worm that can live in no other way than in an innocent child’s eyeball? Because that doesn’t seem to me to coincide with a God who’s full of mercy.1

This is exactly the conclusion any reasonable and compassionate person should reach. The creation we occupy is full of many things much worse than parasitism.

Sir Attenborough’s logic would be spot on if the literal interpretation of Genesis were not true. Rejecting the truth of man’s evil heart, our rebellion, and the reality of the Curse makes observing our present circumstance of suffering and death considerably confusing, and perhaps a source of resentment.

But by rejecting the truth, they also have no hope of the gospel. Their unknowable god made a universe with time-and-chance evolution that resulted in the same predicament of parasitism—and for no good reason. Therefore, they should be even more upset with this supposed god and its millions of years of evolutionary suffering—but they are not.

So, what about this worm? Did the real God create a parasite that can live in no other way than a child’s eye? Absolutely not! These worms are actually called nematodes. There are about 40,000 species of nematodes, and the majority are not parasitic at all! They exist quite well outside of the human eye. Only 35 of them are parasitic to humans.2 Christians need not shrink back from Sir Attenborough’s questions because, like hummingbirds and orchids, nematodes are amazing!

Nematodes thrive all over the earth. They live in oceans, on mountains, and deep underground. One cubic meter of dirt can contain over a million nematodes. They can lay 200,000 eggs at a time, and they possess the strange ability to die and come back to life decades later in a process known as cryptobiosis (hidden life).

Since we know God made them to be not parasitic at the beginning, what function do they serve? The majority are incredibly beneficial. They feed on the nutritious insides of bacteria and algae and decompose organic matter. This fertilizes the soil, helping plants to thrive. They are not the bad guys after all.

But why are some parasitic? Interestingly, evolutionists also believe that nematodes started out harmless. Researchers published a 2009 paper in Trends in Genetics that explained the following: since nematodes already ride harmlessly on insects, the researchers think that when resources grew scarce, some species learned that they could feed on their insect companions.3 The behavior was just a matter of surviving. Unfortunately, this parasitism is how African river blindness is transmitted. Struggling nematodes learned that they can feed on blackflies. Blackflies learned that they can feed on humans. When an infected fly bites a human, it can transfer the nematodes and thus cause a child to tragically lose his sight.

Truly, all of creation groans (Romans 8:22). But because God is truly merciful, Jesus died for the guilty, and we will be with Him where there is no more suffering or death. Now that is amazing. I hope Sir Attenborough discovers this mercy soon.