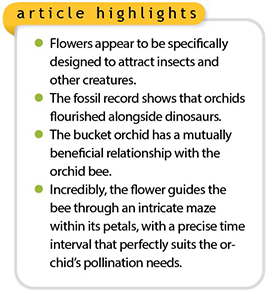 Flowers hold a fascination for most people. They have at least a threefold purpose: First for attracting animals (e.g., insects, birds, and mammals) for reproduction via pollination, the second for their medical and aesthetic value, and the third is that the ovary of the flower grows into fruit—a valuable source of food.

The orchids (Orchidacea) are a large family of flowering plants commonly called the orchid family. God designed them to be fragrant and their blooms unique and functional in fascinating ways.1 Orchids are designed with bilateral symmetry and tiny seeds.

Not surprisingly, orchids have always been orchids. God created orchids during the creation week thousands of years ago. Evolutionists, however, date the earliest orchid at 100 million years ago, but it’s still just an orchid.2 Indeed, according to the fossil record dinosaurs wandered among some very familiar plants—such as the orchid.

An amazing and intimate relationship is found between a specially designed orchid called the bucket orchid and the euglossine (or orchid) bee found in South America and Trinidad. The green/metallic blue orchid bee (family Apidae, genus Euglossa) is designed to pollinate and collect and store fragrances. The exact function of this odorous compound is not definitely known. Perhaps it’s a signal to female bees, much like the beautiful tail of the male peacock attracts peahens.

The bucket orchid does not produce nectar that usually attracts insects. A male euglossine bee is instead attracted to the bucket orchid by its secretion of an aromatic fluid composed mostly of compounds called esters, the combination of an organic acid and an alcohol.3

The bee lands and falls into the fluid of the bucket orchid. Brushes on the insect’s foreleg pick up the chemicals that are then stored inside their swollen hind leg (tibia). The orchid’s downward-facing guard hairs prevent the struggling bee from climbing out except at a narrow spout. This spout just happens to be designed with small knobs that provide footing for the insect so it can climb up!

It’s here that the bee is gripped by portions of the flower. As the bee tries to escape, the flower holds it and applies glue from a structure called the viscidium. This will aid in the fastening of sacs called pollinia, pollen grains that are fused together. However, the glue needs time to dry and set before the bee is released. This may take up to 45 minutes. Once dry, the bee is freed and will visit other orchids. When the bee enters another flower of the same species, the pollinia will stick to the stigma of the second flower, where pollination occurs. Is such a detailed process the result of time and chance—or plan and purpose?

Evolutionists appeal to the cryptic term co-evolution in an attempt to explain this amazing relationship. But the word means nothing in terms of the origin of these two organisms and means only that they “evolved together.” This is hardly a scientific explanation.

Creationists see this relationship as a form of mutualism created in the beginning in which both insect and plant benefit and neither suffers. Christ has designed the bucket orchid and orchid bee, and the detailed process of pollination, to reflect His glory.4