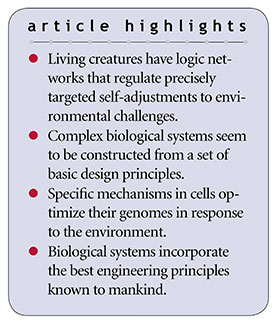 While I was chatting once with an inmate at a Pennsylvanian prison, he told me that upon his arrival a guard wryly said he was free to do whatever he wanted…so long as it was regulated. Regulations are a method of control using rules in lieu of physical handling. Since regulatory control over systems, processes, and behaviors is often essential, regulations are pervasive in organizations—and also in biology. If engineered control systems and biological regulatory systems are both based on rules, how similar are they?

A previous article in this series discussed how living creatures adapt to changing conditions by using logic-based selection mechanisms that correspond to human logic.1 A simple logical proposition goes something like “if (+) condition then perform one kind of response, and if (-) condition then do another.” In machines, that logic is controlled by a (+) on or (-) off switch. Experiments with E. coli bacteria discovered they contain certain proteins that operate like man-made on-off switches. Different arrangements of these switches confer a type of gene logic. Biological systems usually operate like computer programs in which rules define different combinations of on-off settings as commands or conditional statements like “if,” “then,” “and,” “or,” and “not.”

Knowing the basics of logic-based regulatory control is necessary for understanding ICR’s adaptation model called continuous environmental tracking (CET). We hypothesize that if human engineers can use a tracking system to detect and maintain surveillance of a moving target, then creatures might use a similar strategy to track changing conditions.2 We predict that creatures would use elements corresponding to those in man-made tracking systems: 1) input sensors, 2) programmed logic mechanisms to regulate an internal selection of adaptable responses, and 3) output “actuators” to execute responses.

Innate logic-based regulatory systems are perfectly suited for the mechanisms an organism uses to effect adaptive responses to the different challenges it detects. These systems imitate the conscious logical intentions of a designer’s mind, which enables the organism’s logical systems to internally select output responses from a group of potential solutions. When conscious organisms—or their unconscious cells—integrate sensory inputs, memory, and logical rules to make selections, they are said to express cognition. Creatures effectively use this type of programmed internal logic to self-adjust to changing conditions.

Creatures effectively use this type of programmed internal logic to self-adjust to changing conditions.

In this article, we’ll first consider new research that helps explain how logic-based modules are linked into extremely complicated biological regulatory networks. Next, we’ll survey examples of how those networks bring about remarkable self-adjustments that are precisely targeted to specific environmental challenges. Throughout, we’ll again see that biological systems incorporate the best engineering principles used in human-designed systems.1

Dr. Robyn Araujo of Queensland University of Technology (QUT) has worked extensively on the mathematics underlying the internal logic that enables creatures to “function and thrive amid changing and unfavorable environments.”3 In a study published in Nature Communications, she established that “all networks that exhibit robust perfect adaptation…are decomposable into well-defined modules.” Modularity is an important design principle that engineers incorporate into mechanisms to help them resist breaking down (i.e., make them “robust”). Remarkably, Dr. Araujo’s “unexpected result” identified “processes [that] are empowered by simple and scalable modular design principles that promote robust performance no matter how large or complex the underlying networks become.”3

A QUT news report on the results of Dr. Araujo’s study begins with this incisive question: “How does the ‘brain’ of a living cell work, allowing an organism to function and thrive in changing and unfavourable environments?”4 This question is exactly what ICR’s design-based CET model tries to explain. Dr. Araujo responds by saying:

Proteins form unfathomably complex networks of chemical reactions that allow cells to communicate and to “think”—essentially giving the cell a “cognitive” ability, or a “brain”….It has been a longstanding mystery in science how this cellular “brain” works.4

One characteristic of biological regulatory networks is their extreme exactness, an attribute that’s consistent with purposeful design as opposed to undirected, gradual evolution. Dr. Araujo “studied all the possible ways a network can be constructed and found that to be capable of this perfect adaptation in a robust way, a network has to satisfy an extremely rigid set of mathematical principles.” How rigid? Well, her studies represent “five years of relentless effort to solve this incredibly deep mathematical problem.”4

One theoretical assumption of the CET model is that biological functions (not consciousness or life itself) are explainable by engineering principles. Dr. Araujo’s conclusions seem to offer such support:

As we continue to amass ever larger quantities of data on the vast and complex networks of molecular interactions within living systems, a tantalizing question continues to be raised: could complex biological systems be constructible from just a limited set of simple design principles? Here we show conclusively that, for RPA [robust perfect adaptation]-capable networks at least, the answer is an unequivocal yes.5

After considering fundamental constraints on biological operation, she ponders “whether all biochemical networks, of any size, with a fundamental need to exhibit robust functionalities, are characterized by modular architectures.”5

Engineers face huge challenges in developing the rules and programming for good regulatory controls—particularly those related to adaptation. ICR’s Brian Thomas discussed a fascinating case of adaptation for octopuses living in polar or tropical waters. Temperature greatly affects the speed of their nerve signals, since “Antarctic [protein] channels would open about 14 times slower and close about 60 times slower than would tropical channels.”6 Researchers who studied this reported:

On the basis of conventional natural selection, we hypothesized that the channels’ genes would have evolved mutations to help tune them to their respective environments. Surprisingly, the primary sequences encoded by the two genes were virtually identical.7

In contrast, they found a regulatory network that modifies RNA molecules before they are translated into proteins. The result is that slightly different proteins are made for ion channels in the octopuses’ neurons that suit outside water temperatures. They observed that “although still maintaining the basic K+ channel plan, octopuses can make fast-closing versions, and the extent of their expression can be graded.”7 Graded adaptive responses? That itself is an engineering feat, and more research will refine how octopuses use RNA editing for rapid acclimation and long-term adaptation.

ICR geneticist Dr. Jeffrey Tomkins has discussed regulated RNA editing in corals that supposedly date back to “the earliest stages of life on Earth.” Far from being “simple,” he notes that “surprisingly, it was discovered that the RNA editing patterns in the corals resembled those found in mammals,” with researchers finding “over 500,000 sites in coral genes where the sequence had been altered with RNA editing.”8

Another example is regulatory mechanisms that amplify the number of repetitive DNA sequences associated with the genes encoding ribosomal proteins. Sensors on yeast are linked to logic mechanisms such that if (+) “external nutrient availability” then implement “rapid, directional” adjustments in the number of repetitive DNA sequences to ramp up the production of ribosomal proteins needed to metabolize the increased levels of nutrients.9 Differing sequence numbers control the expression of variable traits targeted to available nutrients. The researchers’ conclusion is consistent with continuous environmental tracking:

Here we show that signaling pathways that sense environmental nutrients control genome change at the ribosomal DNA. This demonstrates that not all genome changes occur at random and that cells possess specific mechanisms to optimize their genome in response to the environment.9

We’ve seen evidence that perhaps all intracellular logic-based networks can be modeled mathematically, be explained by engineering principles, and work to direct precisely targeted responses. These findings are what the design-based CET model expects—and predicts will continue to be discovered—since it anticipates that the regulatory principles governing biological networks correspond to those in human-derived networks.

The Pennsylvanian inmate learned the hard way that regulatory controls naturally limit freedom. But when engineered into biological systems, they confer a flexibility to organisms that liberates them to explore new environments and potentially create new niches.

Interestingly, we can infer the nature of rule makers from the characteristics of their regulations. For instance, it’s possible a government regulation could be universally disliked because it’s needless, overly restrictive, redundant, unfair, or so illogical that it undermines its intended purpose. So far, there are no identifiable needless or foolish biological regulatory systems. Quite the opposite, in fact. Is this just a lucky outcome of a mindless, death-driven process like evolution? Or does it originate from the matchless wisdom of nature’s Creator, the Lord Jesus Christ? The answer is evident.

More The Natural Direction of Life Is Degeneration, Not Evolution

Why Would Parasitic Worms Help Bowel Disease?
According to a recent report, one biotech company has plans to test and market a rather unusual treatment for certain autoimmune intestinal ailments like...
BY: BRIAN THOMAS, PH.D.

Study Finds Molecules Evolving in Wrong Direction
Which is more complex—a typical man walking across a street, or a blind man carrying a legless man across the street? The blind and legless...
BY: BRIAN THOMAS, PH.D.
More Creation Science Update

Scientists Reach for Evolution's Replacement
Most people say that evolution is true, so why do a growing number of scientists doubt it? These skeptics don’t question evolution’s premise...
BY: BRIAN THOMAS, PH.D.