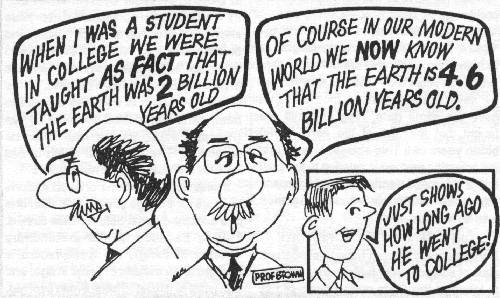 Over the years of my involvement in the creation ministry, many occasions have arisen where I have been confronted by someone in a church (perhaps a pastor or scientist), insisting that we at ICR are putting stumbling blocks in people's way by advocating a young age for the earth.

Does it really matter what one believes about the age of the earth? Why do ICR (and many other) scientists insist on a young age? The following is just a summary of some of the reasons why this is a crucial issue, and why it does matter:

It is important that we teach a correct understanding of science. One of my favorite passages in regard to this matter is Job 38:4: "Where wast thou when I laid the foundations of the earth? Declare, if thou hast understanding." In other words, as I put it in my lectures, "Were you there?" Actually, no one was there to record these past events, for recorded history begins only a few thousand years ago.

Because of this, it has been shown that the various methods (including radioactive dating methods) many scientists use to try to establish the age of the earth have assumptions about events of the past that can be shown to have considerable problems.

It is important to note that back in the 1940's, college students were taught, as fact, that the earth and the universe were two billion years old—and this was verified by several independent methods that gave the same date. Now students are taught that the age of the earth is 4.6 billion years old! This shows, clearly, that the scientific method in relation to the past has problems! Scientists should approach this issue cautiously, recognizing their own limitations.

Because many people have this incorrect view of science, they believe that one has to interpret the Bible on the basis of this view. Many Christians insist that the meaning of Genesis 1:1, "In the beginning God created the heaven and the earth," is that billions of years ago God began creating the heavens and the earth, because of what they believe scientists have proved in regard to the age of the earth.

Christians have to realize that if they accept an old age for the earth, this view did not come from the Bible; it comes from outside the Bible. Thus, when they insist that we accept the "billions of years" theory, they really are telling us to accept the fallible words of fallible scientists, whose theories change, who were not there, who don't know everything—to tell God what He means! Thus they have put man in judgment of God. Man becomes the authority.

Isaiah 2:22 states: "Cease ye from man, whose breath is in his nostrils: For wherein is he to be accounted of?" In other words, stop trusting in man! Isaiah 40:22 tells us that man is like a grasshopper, when compared to God.

For me to accept an old age (billions of years) for the earth, is to accept that fallible man's fallible methods are in authority over God's infallible Word. I can't do that!

3. CORRECT VIEW OF THE GOSPEL

In many of our publications, we have shown clearly that physical death and bloodshed of man and animals came into existence after Adam sinned (Romans 5:12; I Corinthians 15). The basis of the Gospel message is that God brought in death and bloodshed because of sin (Hebrews 9:22), so that man could be redeemed. The reason for death is tied up with the message of redemption.

Because so many Christians today have accepted the evolutionary time scale of billions of years, this has led to many compromise positions about Genesis being promoted in Christian circles. Positions such as the "Day Age Theory," "Progressive Creation," the "Gap Theory," the "Local Flood Theory," etc., are rife in Christian circles today. God hates compromise (Revelation 3:15,16)!

Why do we at ICR believe in a young age for the earth? Firstly, if we take God at His Word, it is obvious from Scripture, that when one adds up all the dates from the first day of creation onwards, the world could only be in the order of thousands of years old. In many of our publications, we have also shown that the days of creation have to be ordinary days of 24 hours in length. From my experience, the major reason many Christians don't accept this is not because of what the Hebrew word for “day,” in its context in Genesis means, but because they believe scientists have proved that the earth is billions of years old; therefore they have to insist that the days of creation are long periods of time.

Secondly, there is much overwhelming scientific evidence that fits with the earth being young. This cannot fit into an earth billions of years old. ICR books, such as Scientific Creationism, What is Creation Science?, and Science, Scripture and the Young Earth, document these evidences.

Thirdly, good scientists recognize that scientific methods, in relation to the past, have great limitations. A good scientist knows that science cannot prove the age of the earth to be either young or old.

I have had people say to me that they can't wait to ask the Lord, when they get to heaven, how long He really took to create the earth. I think He will answer something like this: "(It was written), for in six days the Lord made heaven and earth, the sea, and all that in them is, and rested on the seventh day" (Exodus 20:11).