The so-called backwards retina is an example of an argument against creationism long ago disproved. Nonetheless, it is one of the most common arguments used by Darwinists to argue that life was not designed. For example, one of the leading American Darwinists, Brown University Professor Kenneth Miller, claimed that a prime example of "poor design" is the fact that light in the human eye has to travel through the neuron layers before it reaches the retina photoreceptors. He argues that this design reflects poorly on an Intelligent Designer and, to Miller, provides clear evidence that no designer exists. Rather, it demonstrates to him that the eye evolved by mutations and natural selection and was not designed. In the words of Miller, an Intelligent Designer would not have placed the neural wiring of the retina on the side facing incoming light. This arrangement scatters the light, making our vision less detailed than it might be, and even produces a blind spot at the point that the wiring is pulled through the light-sensitive retina to produce the optic nerve that carries visual messages to the brain (1999, p. 101).

The blind spot does not reduce vision quality for several reasons. Special tests are normally required to even notice it because the other eye fills in the gap. Furthermore, the brain only uses information from the retina to construct an image and does an excellent job of dealing with other "blind spots" such as shadows, reflection problems, dim light, and dirt on a person's glasses. Shermer claims that the human eye is not just "poorly designed" but the anatomy of the human eye shows that it is anything but "intelligently designed." It is built upside down and backward, with photons of light having to travel through the cornea, lens, aqueous fluid, blood vessels, ganglion cells, amacrine cells, horizontal cells, and bipolar cells, before reaching the light-sensitive rods and cones that will transduce the light signal into neural impulses (2005, p. 186). 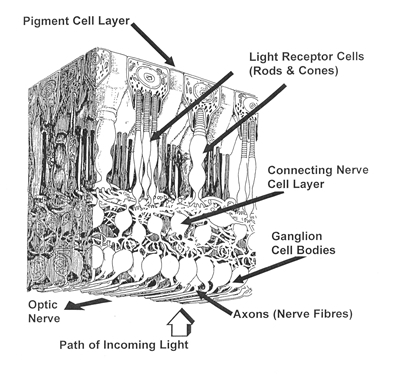 Williams adds that not only human eyes, but those of "all other vertebrates, have the functionally stupid upside-down orientation of the retina" and that the "functionally sensible arrangement is in fact what is found in the eye of a squid and other mollusks" (1997, pp. 9-10). An evaluation of this argument reveals it is not only naive, but grossly erroneous.

The Findings of Research

Research by ophthalmologists has clearly shown why the human retina must employ what is called the "inverted" design. An inverted retina is where the photoreceptors face away from the light, forcing the incoming light to travel through the front of the retina to reach the photoreceptors. The opposite placement (where the photoreceptors face the front of the eye) is called a "verted" design. One of the many reasons for the inverted design is, behind the photoreceptors lies a multifunctional and indispensable structure, the retinal pigment epithelium (Martínez-Morales 2004, p. 766). This monolayered tissue contains the black pigment melanin that absorbs most of the light not captured by the retina. This design has the very beneficial effect of preventing light from being reflected off the back of the eye onto the retina, which would degrade the visual image.

The photoreceptors (rods and cones) must also face away from the front of the eye in order to be in close contact with the pigment epithelium on the choroid, which supplies the photoreceptors with blood. This arrangement allows a "steady stream of the vital molecule retinal" to flow to the rods and cones without which vision would be impossible (Kolb 2003, p. 28). The verted design, claimed by Miller to be superior, would place the photoreceptors away from their source of nutrition, oxygen, and retinal (the choroid). This design would cause major problems because rods and cones require an enormous amount of energy for their very high metabolism required in functioning, maintenance, and repair. In addition, because of phototoxicity damage, the rods and cones must completely replace themselves approximately every seven days or so.

This design is extremely critical because the retina requires a high metabolism level due to the continual replacement of the photoreceptors required for vision. Consequently, the retina uses more oxygen and nutrients than almost every other part of the body, requiring an ample blood supply. The verted design would not allow the rods and cones to function properly because of the blood supply required for their high rate of metabolism. If the photoreceptors were in front of the neurons, the blood supply would have to be either directly in the light path of the receptors, or on their side, which would significantly reduce the number of photoreceptors used for sight.

Importantly, placing the retina neural components in front of the photoreceptors does not produce an optical handicap for several reasons. One reason is the neural elements are separated by less than a wavelength of light. Consequently, very little or no scattering or diffraction occurs, and the light travels through this area as if it was at near-perfect transparency. Secondly, when viewed under the microscope, most cells are largely transparent (and it is for this reason stains, such as Eosin-Y and Hematoxylin 2, are needed to better visualize the various cell parts). Consequently, the thin layer of cells in front of the retina rods and cones have a negligible light blocking effect.

In the retina region which has the highest resolution, the central retina (the fovea and, in particular, the foveola), the neurons in front of the photoreceptors are shifted to the side so that light has a direct pathway to them, resulting in the least distortion where it matters most. The high resolution macula also uses cones that are more tightly packed to achieve high resolution color vision. The peripheral retina has lower resolution and consists of mostly rods for black and white vision.

This design is a highly effective method to accurately transmit enormous amounts of data along the optic nerve in a method analogous to the zipping and unzipping of a computer file to facilitate computer file transmission. To function, the transmission must be very rapid because the image needs to be refreshed continuously like a pixel TV image. The eye's design actually appears to be optimized around the physical limits of the visible light spectrum (Calkins 1986).

The pigment epithelium tissue performs numerous other functions critical for retina viability and activity. One is that it phagocytosises ten percent of the mass of each photoreceptor outer segment on a diurnal schedule, and constantly restores the chromophore to 11-cis-retinal from its all-trans configuration, permitting visual pigment synthesis and regeneration (Dowling 1987, p. 198). It also is part of the outer blood-retinal barrier, helps maintain water and ion flow between the neural retina and the choroid, protects against free radical damage, and regulates retinoid metabolism (Martínez-Morales, et al., 2004, p. 766).

This short review covers only a few of the many reasons for the superiority of the existing design of the mammalian retina. Our knowledge now shows that the retina design is superior to what we understood even just a few short years ago. Gratitude rather than impertinence seems the more appropriate response to its ingenious design.

Note: I wish to thank Jody Allen for her review of an earlier draft of this article.

* Jerry Bergman is on the Biology faculty at Northwest State College in Ohio. Joseph Calkins is an Ophthalmologist in private practice, formerly Professor of Ophthalmology at Johns Hopkins University.