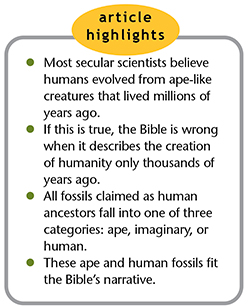 A recent survey showed that the most persuasive argument for evolution comes from the iconic drawing of the apes-to-man parade.1 This popular picture illustrates ape-like animals evolving into a human. If this image reflects actual history, then the history in Genesis is wrong. If we came from apes, then we didn’t come from Adam and Eve. That also casts doubt on the other Scriptures—and their human authors—that refer to Adam as our real ancestor.2 Do certain fossils demand we take scissors to our Bibles?

Scientific literature and popular media portray hominids as people-like apes or ape-like people on their way to becoming real humans. Over the last 50 years of looking into human origins, ICR scientists have found that hominid fossils fit three creation-friendly groups that leave the biblical Adam intact.

The first group is ape. The fossil nicknamed Lucy is probably the most famous so-called hominid in this category. Lucy’s kind had locking wrists and ape-like fingers, arms, and ribs, with ape jaws and teeth. Why not just call them apes? Their discoverer and promoter Donald Johanson has claimed since 1974 that Lucy’s kind was becoming human. But others, like the late Baron Solly Zuckerman, saw them as mere apes with no human ancestry.3 These fossils rightly bear the ape name Australopithecus.

Apes in this group are often made to look more human-like than they really were. In the 1970s, fans of human evolution assigned fossil human tracks at Laetoli, Tanzania, to Lucy’s kind. That was easier back when australopith fossil finds contained too few foot fragments to figure out what its feet looked like. Since then, scientists have found australopiths with feet, and these new fossils confirm its ape grouping by showing it had hands for feet just like chimps do.4 What threat does an extinct ape pose to Genesis history? None. Evolution needs natural processes to create new kinds, not kill off old ones.

A more recent candidate named Australopithecus sediba fits a second group. When it was first described in 2011, Texas A&M University’s Darryl DeRuiter told ABC News, “This is what evolutionary theory would predict, this mixture of Australopithecene and Homo….It’s strong confirmation of evolutionary theory.”5 But other scientists took a closer look and found the real reason for “this mixture.” Sediba did not combine different features but different species. Like the famous Piltdown forgery,6 Sediba belongs to an imaginary group.7 Human parts placed beside Lucy parts pose no threat to our ancestry in Adam.

The third group is human. Which fossils belong here? Sometimes it’s tough to tell. Healthy human heads can take more different shapes and sizes than most other creatures God made. Some ancient human skulls look a bit like apes, but no more so than some folks alive today.

Homo floresiensis (nicknamed “Hobbit”) presented a challenge. The skull and other fragments from a remote island in Indonesia came from a small person with a tiny head. Initial reports declared it a possible ancestor, but later work showed an excellent match between Hobbit and people today who have microcephaly.8,9 Diseased humans don’t show evolution, just sin’s curse on creation.

So far, no fossil fits human evolution. Whether ape, imaginary, or human, fossils confirm created kinds and Adam in our not-so-distant past.

Scientists Late to Recognize Human and Giant Mammal Coe.,.
Giant mammals roamed North America during the Ice Age, but were humans among them? A site in Vero Beach on Florida's East coast contains mammoth,...
BY: BRIAN THOMAS, PH.D.

Has the Lost City of Atlantis Been Found?
"I think we've found the best candidate for what was the beginnings of civilization," said University of Hartford in Connecticut archaeologist...
BY: BRIAN THOMAS, PH.D.

The Tonga Volcano Eruption and the Ice Age
On January 15, 2022, an underwater volcano in the Pacific Ocean’s Kingdom of Tonga erupted with the energy of hundreds of Hiroshima-size atom bombs.1...
BY: JAKE HEBERT, PH.D.
More Creation Science Update

ACTS & FACTS
Creation Pioneer John Baumgardner
My wife, Mary, and I currently live in central Virginia near Lynchburg and Liberty University, where I serve as research professor emeritus in the School...
BY: JOHN BAUMGARDNER, PH.D.
Shop Related Products