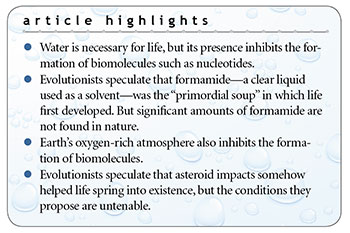 In addition to original research and data analysis on important themes in the origins debate, ICR scientists also evaluate the progress of secular research reported in many scientific publications. One of the fruits of this research was noted in last month’s Acts & Facts Impact article on the topic of abiogenesis—the supposed development of life from non-life.1 It reviewed the history of research on the origin of life and showed how utterly futile the evolutionary explanations of the alleged naturalistic beginnings of life really are. The article wasn’t able to include all the important recent scientific publications on the topic, so we’ll cover some of those here.

When speculating about the naturalistic origins of life on Earth, evolutionists run into a major paradox of basic biological chemistry: While water is the critical medium for all life, it also forms a chemical barrier to the formation of chains of nucleotides such as RNA and DNA that are the foundation of life. In a living creature, this is not a problem because of the complex chemistry and machinery of the cell. But for the evolutionary theorist, this creates yet one more insurmountable barrier for how nucleic acids could have spontaneously formed in the first place. Desperate to solve the basic evolutionary impediment of this water paradox, some researchers have proposed that life may have first developed in something other than water.2,3

In the quest to find a water alternative, the emerging candidate is a clear liquid called formamide that is composed of hydrogen, oxygen, carbon, and nitrogen.2,3 Formamide promotes polymer bond formation more than water and can even react with other compounds under human-engineered laboratory conditions to form nucleobases and amino acids. However, there are several major problems with this idea.

First, formamide is toxic—it’s not conducive to cell life. Humans manufacture formamide and widely use it as a solvent to develop pharmaceuticals, pesticides, resins, and plasticizers. Another big problem is that formamide does not occur naturally in any significant amounts anywhere on Earth. Therefore, it has been proposed that somehow radioactive minerals irradiated hydrogen cyanide and acetonitrile with gamma rays in select pockets on the early earth.2,3 But adding this speculation to the mystical laundry list of requirements needed for the evolutionary development of life still effectively brings the possibility of life arising from non-life to zilch.

Adding this speculation to the mystical laundry list of requirements needed for the evolutionary development of life still effectively brings the possibility of life arising from non-life to zilch.

Lasers and Asteroids to the Rescue?

Another major impediment to life’s naturalistic origin is the atmospheric problem discussed in last month’s article.1 Earth’s current atmosphere is oxidizing (i.e., oxygen rich) and prohibits the spontaneous formation of biomolecules outside the protection of a living cell. Geological data indicate Earth’s atmosphere has always been oxidizing. Nevertheless, evolutionists maintain that for biomolecules to spontaneously form, Earth must have had a reducing atmosphere with little or no oxygen. Even assuming it did, the problem of how nucleobases, the building blocks of DNA and RNA, could have spontaneously formed is still impossible.

Recently reported research attempted to explain the spontaneous generation of nucleobases in a reducing atmosphere by using huge modern terawatt lasers. The idea was that the lasers would somehow simulate the plasma generated from an asteroid impact. When they blasted mixtures of ammonia and carbon monoxide, researchers found that trace amounts of nucleobases could be produced. However, as the authors’ report noted, “We observed hydrogen cyanide as a main product of formamide thermal decomposition.”4 The lasers induced the formation of formamide (discussed above), which was then broken down into hydrogen cyanide, an extremely poisonous liquid that boils at slightly above room temperature at 26 °C (79 °F). Hardly the essence of life’s beginnings!

The authors also admitted that “we should note that the sub-parts per million level reached in laser experiments for pyrimidine bases is a threshold detection limit of the used method.”4 In other words, the levels of nucleobases temporarily produced before they could be boiled and destroyed in hydrogen cyanide were so small they could barely be detected. In addition to these problems, this abiogenesis experiment, like all the others, is still subject to the chirality, polymerization, replication, and informational impediments previously discussed.1

Not only do these new experiments add nothing to the evolutionary solution of life’s origin outside a Creator, they also serve to further illustrate the profound truth of God’s Word. The Bible states:

For since the creation of the world His invisible attributes are clearly seen, being understood by the things that are made, even His eternal power and Godhead, so that they are without excuse, because, although they knew God, they did not glorify Him as God, nor were thankful, but became futile in their thoughts, and their foolish hearts were darkened. Professing to be wise, they became fools. (Romans 1:20-22)