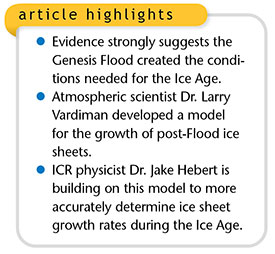 In the creation model, a single Ice Age lasting hundreds of years was caused by and quickly followed the Genesis Flood.1 In 1994, ICR atmospheric scientist Dr. Larry Vardiman published a mathematical model for the rapid formation of thick post-Flood ice sheets.2 In a previous research column, I described my work extending his research.3 Here I present an update.

Because of the heat generated by rapid seafloor spreading during the Flood, the oceans would’ve been much warmer after the Flood than they are today. This would have caused more evaporation from the sea surface, resulting in significantly heavier snowfall at high latitudes and on mountaintops.1 Dr. Vardiman’s model has much more rapid ice deposition during the Ice Age, with these deposition rates rapidly but gradually decreasing to their present-day values.2

Both of these rates can change over time. If the two rates are equal in size, the height of the ice sheet will remain constant. But if the precipitation rate is greater than this downward speed, the ice sheet will grow in thickness. Dr. Vardiman assumed that the speed at which the upper ice surface moves downward was always equal to a small constant multiplied by the height of the ice sheet. His method was reasonable but an oversimplification, as he himself acknowledged.1,3

Obtaining a better estimate of the ice sheet’s growth over time requires finding this downward speed. That in turn requires a sophisticated computer model that simulates the behavior of the entire ice sheet. By using Dr. Vardiman’s original precipitation model and the computer model to obtain a better estimate of this downward speed, we can then find the rate at which the ice sheet height grows with time.

The main goal of this research is to show that it can be accomplished and to lay the groundwork for future creation research. Given the uncertainties about past temperatures and precipitation rates, it seems likely this effort will only yield semiquantitative (“order of magnitude”) results. Regardless, it’s hoped the results will show that heavy but realistic Ice Age precipitation rates can form thick ice sheets in just a few hundred years.

The Flood/Ice Age model predicts thicker annual layers than uniformitarian models do. Hopefully, this research will give us a feel for how much thicker these annual layers actually were. Once we obtain the height of the ice sheet as a function of time, a simple IDL computer code can determine the thicknesses of the annual layers. I have already used this code to estimate annual layer thicknesses in Dr. Vardiman’s original model. A paper describing this method has been submitted to the Creation Research Society Quarterly and is in the process of being reviewed.3

We at ICR thank both God and you for your faithful financial contributions—even during these stressful times—that make this research possible.

Can Asteroids Select Life?
A recent study published in Science claims that an asteroid caused new forms of plants to evolve.1-3 But can an asteroid really be responsible...
BY: TIM CLAREY, PH.D.

Bombardier Beetle
Imagine a hungry frog chasing a delicious beetle. As the frog shoots out its sticky tongue to capture the prey, an explosion occurs that stuns...
BY: FRANK SHERWIN, M.A.

Spiders
Do you feel a natural revulsion when you experience spiders up close? Why would God create creepy arachnids? Discover God’s purpose for these...
BY: FRANK SHERWIN, M.A.

The Amazing Human Body
The psalmist said we are “fearfully and wonderfully made.” What insights can we glean from science to increase our wonder and honor...
BY: FRANK SHERWIN, M.A.
More Radio Program

Dinosaur Extinction via Asteroid?
Have you heard about the Chicxulub impact site in Yucatan, Mexico? Some scientists claim this site as the “smoking gun” of the asteroid...
BY: TIM CLAREY, PH.D.

Beauty in Motion
We’re approaching the 2018 Winter Olympics. Are you looking forward to seeing great athletes go for the gold? When you watch snowboarders...
BY: RANDY J. GULIUZZA, P.E., M.D.

Why Does Recent Creation Matter?
ICR scientists often talk about recent creation. But does the Bible really present this view? Should Christians discuss this issue with friends...
BY: BRIAN THOMAS, PH.D.
The Latest
NEWS   ACTS & FACTS   PODCASTS