When research biologist Dr. Nathaniel Jeanson plotted hundreds of human mitochondrial DNA (mtDNA) sequences onto a tree diagram, the project revealed an obvious pattern: The mtDNA stemmed from three central “trunks” or nodes instead of just one. Three trends in Jeanson’s data suggest that the wives of Noah’s sons Shem, Ham, and Japheth best explain this finding.

Mothers pass mtDNA to every new generation. It comes from the mother’s egg cell and contains 16,569 chemical base pairs—either adenine-thymine or guanine-cytosine—organized to encode vital information, like words in an instruction manual. Sometimes a DNA copying error, known as a mutation, leaves a different base in place of the original. Several empirical studies reveal that about one human mtDNA mutation occurs every six generations.1 When a mother’s egg cell mtDNA mutates in one place, the child conceived from that egg cell—plus, if the child is female, later descendants—inherits that difference. This leaves a genetic trail that can lead back to mtDNA ancestry.

Jeanson first downloaded mtDNA sequences taken from all major people groups. He then used standard software that arranges the most similar sequences closest together. The result is a tree-like diagram depicting lines of ancestry. 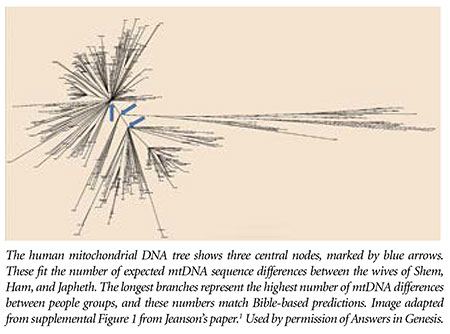 Jeanson’s data show that the human mtDNA tree has three nodes. Thus, everyone alive today carries one of three unique ancestral maternal sequences. This fits Genesis’ claim that all humans who exist today descended from one of the wives of Noah’s sons.

How many mtDNA differences would mutations cause during the 4,365 years since Noah? That depends on generation times. At most, a culture where the women typically give birth near age 15 could have produced 115 mtDNA differences.3 Adding those to Jeanson’s eight estimated pre-Flood differences gives 123. In a spectacular confirmation of Genesis history, the most diverse human mtDNA on record actually shows 123 differences.4

In short, if all peoples descended from three genetically unique mothers, then our mtDNA sequences should trace back to their three nodes. Those nodes should have about eight differences between them. Plus, a strict biblical timeline suggests 123 as the highest number of mtDNA differences that should be observed today. Check, check, and check. These three mtDNA trends trace all of humanity back to Noah’s sons’ three wives—a striking intersection of biblical history and modern genetics.

Editor’s note: Some readers have contacted us about what they perceive to be a fourth node in the lower right of the figure from Dr. Jeanson’s paper. This area should not be considered a node because the distance between it and the nearest central node is almost twice as far as that between the three central nodes. This distance implies perhaps 20 generations, not the 10 or so pre-Flood female generations. Several other regions are spaced just as far as the lower right region yet they are not mistaken for nodes because other branches crowd more tightly around them. Only the three central nodes have the short branch lengths expected from the pre-Flood number of generations.