Still Soft after Half a Billion Years? | The Institute for Creation Research
Skip to main content

Original soft tissue fossils are revolutionizing our understanding of how and when fossils formed. Secular researchers have described dozens of them over the years, from mummified skin and hemoglobin to dried up retinas—all in rock layers designated at least tens of millions of years old.1 The science of tissue decay does not permit these long ages, calling into question the "age" of the most recent discovery: original, pliable, marine worm tube tissue found in Pre-Cambrian fossils.

Publishing in The Journal of Paleontology, a trio of European researchers described, in detail, delicate fossil casings, manufactured by beard worms long ago. The worms were quickly buried and locked in rock like a natural time capsule. The chitin-containing worm tube fossils look the same as those made by modern worms of the same type, complete with high-tech structural cross-layering.2

First, the study authors described what did not happen to these fossil worm casings, which were not mineralized at all. The scientists' research ruled out preservation by various means of "mineralization"—where minerals take the place of original biological material. Silicification, phosphatization, carbonization, pyritization, phyllosilicate metamorphism, and apatite permineralization all are processes known to contribute to fossilization in other instances—but not in the case of these worm sheaths. 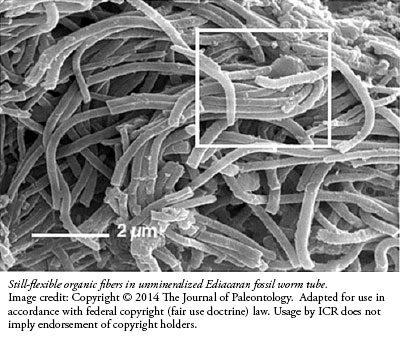 According to the Paleontology report, "Minerals have not replicated any part of the soft tissue and the carbonaceous material of the wall is primary [not replaced], preserving the original layering of the wall, its texture, and fabrics." The paper included electron micrographs of some of those fabrics' fossilized fibers.2

The study authors described the worm wall as still "flexible, as shown by its soft deformation." And just to be clear, they wrote, "The body wall of S. cambriensis [fossil worm] comprises a chitin-structural protein composite."2

Fresh-looking material like this soft chitin and its associated proteins should not cause researchers to merely doubt the worm fossils' 551 million year-old age assignment, but to utterly reject it. However, unless secularists pay homage to the Geologic Time Scale's age designations for characteristic rock layers, their work would almost certainly fail to be accepted as "scientific."

The idea that chitin or any unaltered biological material—soft tissue that has not yet decayed—can last longer than a million years does not have any experimental support.1,3 What decay rate measurements back the claim that soft tissues can last for half a billion years? The still-flexible tube tissue of this lowly ancient marine worm matches well with the relatively recent Flood explanation—a worldwide event that buried these sea floor worms beneath hundreds of feet of sediments.