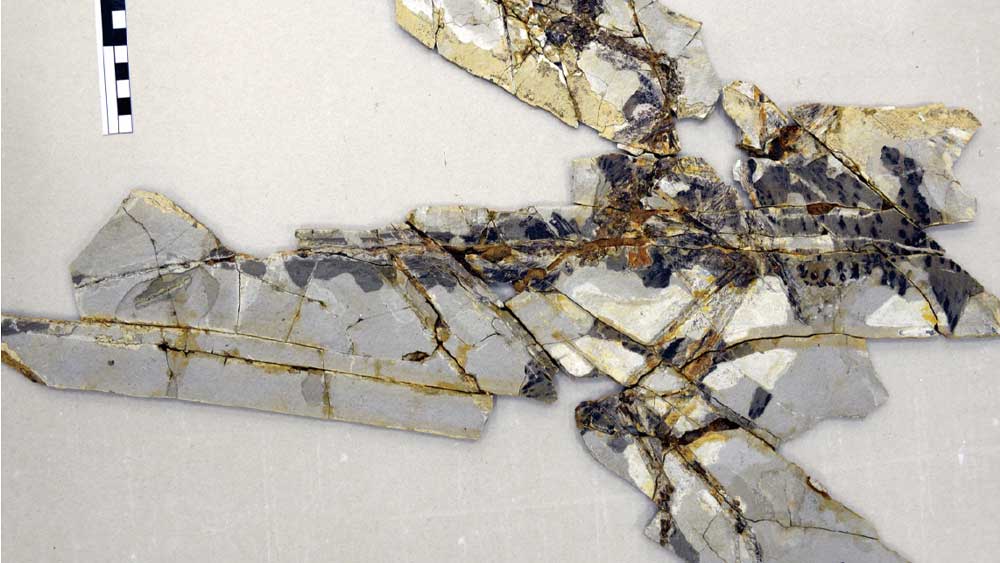 NEWS     CREATION SCIENCE UPDATE     ORIGINAL BIOCHEMISTRY SHOWS THAT FOSSILS ARE RECENT
New Fossil Feathers Affirm Created Kinds
BY BRIAN THOMAS, PH.D. *  |
WEDNESDAY, FEBRUARY 27, 2019
Descriptions of feathered dinosaurs continue to wing their way into scientific literature. While most researchers see each new example as another link in a Darwinian story of reptiles somehow evolving into birds, others fit these fossils into more classical categories. Two new discoveries give owners of these opposing views new opportunities to peck at each other’s ideas of bird beginnings. Both cases are easy to land on a creation-friendly perch.

University of Bristol paleontologist Michael Benton, who wrote the authoritative text Vertebrate Palaeontology, was senior author of the new report. He told his university, “We ran some evolutionary analyses and they showed clearly that the pterosaur pycnofibres are feathers.”2 Shouldn’t we instead have run some anatomical analyses to answer this question of anatomy? Doesn’t “evolutionary analysis” assume evolution occurred before the analysis even begins?

The fibers look just like those on certain so-called “feathered” dinosaurs, including Sinosauropteryx. This Compsognathus look-alike had no wings, while the pterosaurs did. These fibers also happen to look just like what happens to skin that partially rots. None of these fibrous structures share the shape of flight feathers found on real birds. Why hasn’t the rotten-skin explanation taken off as fast as the feathered dinosaur story?

In a separate study, researchers identified feather proteins in Anchiornis—another feathered dinosaur candidate. The team members from China and North Carolina published the finds in the Proceedings of the National Academy of Sciences.3 They first removed the sedimentary rock with acid, leaving the feather remnants behind. Then they set the feather material in resin and ran chemical tests and discovered that the darkened material was made of original bird-feather keratin proteins.

North Carolina State University News called Anchiornis a “small, feathered, four-winged dinosaur.”4 However, the creature did not have the single most dinosaur-defining feature: an open hip socket or acetabulum. The hip sockets in most familiar animals are shaped like a tea cup on its side. Some reptile and birds sockets are shaped like a cup with a hole in the back, but only dinosaur sockets are just a gaping hole. No dinosaurs had bone in the back of the socket. The fact that Anchiornis has some bone back there should disqualify it from dinosaur status, but that would get in the way of this evolutionary story.5

Plus Anchiornis has actual feathers. Its hind-leg feathers, like the extinct Microraptor, probably meant it preferred to clamber up trees and glide down if need be, rather than fly upward. But roadrunners prefer life on the ground and glide more than they fly, and nobody calls them dinosaurs.

The anatomy of these sometimes strange fossils keeps them cooped in their customary categories like pterosaur, dinosaur, or bird.

The anatomy of these sometimes strange fossils keeps them cooped in their customary categories like pterosaur, dinosaur, or bird. And that fact makes the notions of mere fibers as feathers, or birds as dinosaurs seem like flights of fancy.