How would a scientist estimate the time when a canyon formed? Various techniques and different interpretations of those techniques have yielded a wide range of estimated dates for the formation of Arizona's Grand Canyon. But results from a new technique are again challenging the canyon's previous date. Will science ever resolve the Grand Canyon dating game?

Science starts with observation. The Grand Canyon's flat sedimentary rock layers actually extend across broad portions of North America. Evolutionists say that these layers formed during hundreds of millions of years. But at least three observations stand against the evolutionary age assignment. First, such long-ages fail to explain the tremendous time-gaps required by uniformitarian thinking, wherein the vast majority of the evolutionary geologic column is not represented.1 But a miracle would be required to hide the supposed tens of millions of years of erosion that left no trace in the sharp, flat contacts between layers.2 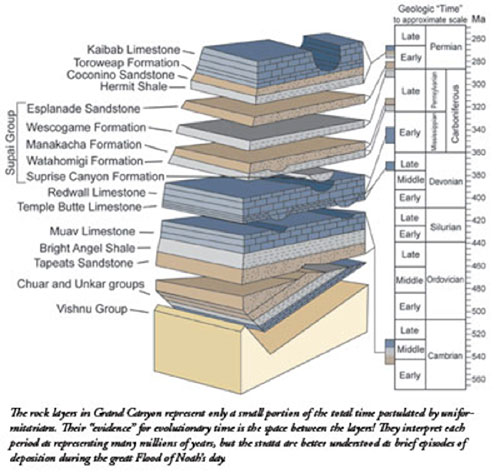 Second, radiometric dates for igneous rocks that formed when ancient lava squeezed in between Grand Canyon layers contradict one another and confound the sedimentary layers' age assignments.3 They illustrate why ages obtained by radioisotope decay are not trustworthy.

Third, across 300 million supposed years, the strata never tilted! If they had, then the iconic Grand Canyon layers would be slanted wedges, not the pancake-flat wafers that they are. Is it realistic to believe that earthquakes, continental shifts, catastrophic impacts, or any other cause of strata tilting never occurred over such a time span?

Dating the layers' time of deposition using scientific clues is clearly riddled with uncertainty. Are secular attempts to date the gorge—the time when water carved through the ancient layers—any more certain? The traditional view was that the Grand Canyon formed when the countryside started slowly uplifting around 70 million years ago. But radiometric dating of recent lava flows that span both sides of the Canyon demonstrated to uniformitarians that it was carved only five to six million years ago. One certainty about secular geologists is that they are continually uncertain about the Grand Canyon's age.

The new results published in Science hearken back to the long-discredited 70 million years idea.4 This new date result compared the concentration of helium atoms trapped inside apatite minerals from eastern and western ends of the Canyon. How could so many experts for so many decades all have been an order of magnitude wrong about the age of the Grand Canyon?

Rebecca Flowers, lead author of the Science study, tried to waive off the age discrepancy. She suggested that the old "conventional models" that indicated 5-6 million years did not take into account the possibility that the canyon may have reversed its flow of direction at some time or times in the distant past, according to Science Now.5

For example, Flowers said, "changes in the slope of the terrain over geological time could have altered the flow of the ancient river."5 But there is no evidence that the Canyon ever flowed backwards. And according to evolutionary age assumptions discussed above, there were no changes to the terrain's slope for 300 million years. On that basis, why would anyone expect northern Arizona to tilt during the last 70 million, when Flowers suggests the canyon was carved?

Flowers may be convinced that her new results are reliable, but other experts are not. State University of New York geologist Richard Young told Science NOW that despite this new study, "there's a lot of evidence for a young Grand Canyon."5 And California Institute of Technology geologist Brian Wernicke said, "It's hard to look at a landscape and discern its erosional history."5

The question arises again: will science ever resolve the Grand Canyon dating game? Considering that the debate about the Grand Canyon's age is 150 years old and still going strong, the mere tools of science may never adequately unfold the pages of the past.