“If anyone has ears to hear, let him hear.” Then He said to them, “Take heed what you hear. With the same measure you use, it will be measured to you; and to you who hear, more will be given.” (Mark 4:23-24) 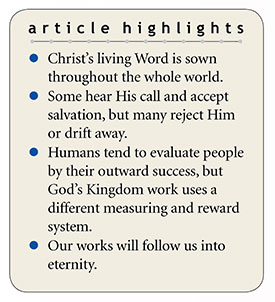 There are over 100 references in the New Testament to the necessity of having ears that will hear the message of the Scriptures. Some address the terrible results of not listening to what God has said. From his prison cell, Paul even told Timothy that “the time will come when they will not endure sound doctrine, but according to their own desires, because they have itching ears, they will heap up for themselves teachers; and they will turn their ears away from the truth, and be turned aside to fables” (2 Timothy 4:3-4). The majority of passages, however, stress the benefits of hearing the message that has been recorded, promising that the more one listens, the more one will understand Kingdom principles.

Some Will Not Listen

Two vivid illustrations from our Lord’s teaching speak to the way eternal truths are received in the world: the Parable of the Sower and the Parable of the Wheat and the Tares (Matthew 13; Mark 4; Luke 8). The illustration of the sower identifies the seed as “the word” and gives us the picture of how we can expect the word to be received when it is “sown” throughout the world. Sometimes the word is not understood (Matthew 13:19), and Satan comes immediately (Mark 4:15) and “takes away the word out of their hearts” (Luke 8:12). Clearly, some hearts will not be receptive to the truths of Scripture; their ears will not hear.

The Parable of the Wheat and the Tares speaks to this same issue from God’s perspective. The Son of Man sows “sons of the kingdom,” and the devil sows “sons of the wicked one” (Matthew 13:37-39). Apparently, even the angels of God are unable to tell the difference (Matthew 13:28-29). They are told to wait and let them grow together until the end of the age before they are authorized to gather “those who practice lawlessness” out of His Kingdom and “cast them into the furnace of fire” (Matthew 13:39-42). Evidently, there are those among the children of the Kingdom who are mistaken for “ministers of righteousness” (2 Corinthians 11:15).

Some Seem to Listen But Do Not Last

There are also some who respond to the word and “immediately receive it with gladness” (Mark 4:16). However, that immediate “joy” (Luke 8:13) fades when “tribulation or persecution arises because of the word,” and they stumble (Matthew 13:21). Many pastors can affirm this disappointing reaction among those who initially seem to respond to the gospel but soon disappear or fall away from what they once embraced. The Bible tells us that once these ears have heard but later reject what they knew to be true, they cannot be rededicated to what they have spurned (Hebrews 6:4-6; 2 Peter 2:20-22).

Perhaps the most important principle we can gain from these parables is that some people (perhaps even the majority) will not respond to God’s Word—no matter how often they hear or how much they have experienced. Our job is to be His spokespersons, but some ears are shut tight.

Some Respond Positively But Will Not Embrace Eternal Values

Our Lord spoke of some seed that found root in the soil of the Kingdom, but the seed fell among thorns and “the cares of this world and the deceitfulness of riches choke[d] the word” (Matthew 13:22). They have heard the word but “are choked with cares, riches, and pleasures of life, and bring no fruit to maturity” (Luke 8:14). Apparently, the spiritual birth is real—so much so that the “servants of the owner” (the angels) are unable to “gather up the tares” without uprooting “the wheat” as well (Matthew 13:27-29).

The tares are sown by the “enemy” in the same field as the wheat (Matthew 13:25). The ultimate proof of what is sown will not show up until the harvest. Herein lies our dilemma. We would expect fruit to be available among those who claim to be God’s people, and we are often surprised by their indifference toward the Kingdom. We would expect excitement for spiritual vision and a willingness to invest in eternal projects. Yet, when we seek their joyful participation within the fellowship of God’s people, we can become discouraged—even disillusioned—by their love for “this present world” (2 Timothy 4:10).

Given the warning that “narrow is the gate” and difficult to find, and that few find it (Matthew 7:14), we should not expect the majority of those professing to be part of the Lord’s family to be easily persuaded to commit their lifestyles and invest their resources in the things that embrace the Word of God or impact the souls of men.

Some Do Respond and Joyfully Produce Kingdom Fruit

There are some, however, who “received seed on the good ground,” having heard the word with understanding and without the thorns surrounding them that might rob them of the fruit of new life (Matthew 13:23). Their ears are connected to a “noble and good heart” that retains the word, and they “bear fruit with patience” (Luke 8:15). These “are the ones sown on good ground, those who hear the word, accept it, and bear fruit: some thirtyfold, some sixty, and some a hundred” (Mark 4:20).

Yet, even among the precious minority who do hear, understand, and produce the eternal fruit of the “new creation” (2 Corinthians 5:17), even among these chosen there are significant differences between the levels of productivity.

God is gracious to all those who bear fruit, even though the amounts are widely different.

Human evaluation tends to exalt only those who exceed all others. But God’s gracious gift of Kingdom work has a different measuring system.

To begin with, all the Kingdom parables point out that the word, the seed, the sowing, and the soil are all of God’s making. The gospel is sufficient for the sins of the whole world (1 John 2:2). The nobleman who left his servants in charge while he went to a “far country” (Matthew 25; Luke 19) gave different levels of resources for the servants to invest until he returned. In one illustration, he gave the same amount to each of his servants and rewarded them on the basis of “how much every man had gained by trading” (Luke 19:15). In the other illustration, he gave each servant a different amount “according to his own ability” (Matthew 25:15). The rewards were proportionate to the work accomplished.

There was one servant who did nothing with the opportunity given; that “wicked and lazy servant” (Matthew 25:26) was rejected entirely and thrown into “the outer darkness” (Matthew 25:30). God is gracious to all those who bear fruit, even though the amounts are widely different. But God has no tolerance for those who waste the opportunity and reject the priceless gift of eternal life.

What Must We Learn from These Overarching Principles?

First, the message of the gospel and the responsibility of identity with the Creator are not popular. Many—perhaps the vast majority—will not respond positively to the gospel, and even many among those who appear to embrace it will not endure or invest their lives in eternal matters. We must not become discouraged by the rejection of the many. Some will hear and understand and will become part of the “general assembly and church of the firstborn” (Hebrews 12:23).

Secondly, the gospel power lies in the word, not in the messenger. Our job is to be a constant witness of that power and expect the Holy Spirit of God to “convict the world of sin, and of righteousness, and of judgment” (John 16:8). Once the “new creation” has taken place and eternal life is granted, we will see the fruit among the redeemed, “some a hundredfold, some sixty, some thirty” (Matthew 13:8). God’s promise to us is that His Word “shall not return to Me void, but it shall accomplish what I please, and it shall prosper in the thing for which I sent it” (Isaiah 55:11).

Our majestic Creator has guaranteed that our “works follow” us into eternity.

Finally, our harvest and reward come with the “new heavens and a new earth” (2 Peter 3:13). Whether we are planting (evangelizing) or watering (discipling), “neither he who plants is anything, nor he who waters, but God who gives the increase. Now he who plants and he who waters are one, and each one will receive his own reward according to his own labor” (1 Corinthians 3:7-8). What a wonderful promise! As we “seek first the kingdom of God and His righteousness” (Matthew 6:33), our majestic Creator has guaranteed that our “works follow” us into eternity (Revelation 14:13).