ICR founder Dr. Henry Morris wrote this article in 1984. Despite the many discoveries and developments in cosmology since then, the points he makes about the creation of the universe are still valid. We invited ICR physicist Dr. Jake Hebert to review this article. He commented:

Inflation theory is now an important part of the Big Bang model for the universe’s origin. If anything, Dr. Morris’ criticisms understate the problems with inflation because the newer version of inflation is even weirder than the older version described here. Inflation is currently under attack even from its former supporters, such as Princeton’s Paul Steinhardt, who now advocates his own version of the cyclic universe model (i.e., endless cycles of expansion and contraction). Critics forcefully argue that inflation theory can never be shown to be wrong, which means it cannot be considered a genuine scientific theory. 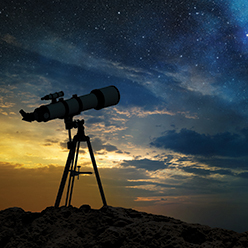 Evolutionists have frequently criticized creationism as unscientific because of its basic commitment to the doctrine of creation ex nihilo—that is, “creation out of nothing.” The idea that God simply called the universe into existence by His own power, without using any preexisting materials, is rejected out of hand by evolutionists since this would involve supernatural action, which is unscientific by definition—that is, by their definition.

Yet, evolutionary cosmogonists maintain that the universe evolved itself out of nothing! Creationists at least postulate an adequate Cause to produce the universe—that is, an infinite, omnipotent, omniscient, transcendent, self-existing, personal Creator God. For those who believe in God, creation ex nihilo is plausible and reasonable. But even if people refuse to acknowledge a real Creator, they should realize that a universe evolving out of nothing would contradict the law of cause and effect, the principle of conservation of mass/energy, the law of increasing entropy, and the very nature of reason itself. How can they say such things?

For those who believe in God, creation ex nihilo is plausible and reasonable.

For example, physicist Edward P. Tryon, one of the first to propound this idea, stated:

In 1973, I proposed that our Universe had been created spontaneously from nothing (ex nihilo), as a result of established principles of physics. This proposal variously struck people as preposterous, enchanting, or both.1

Naturally it would! But it has become semi-official “scientific” doctrine, and cosmogonists have taken it quite seriously.

For many years, the accepted evolutionary cosmogony has been the so-called Big Bang theory. However, there have always been many difficulties with this concept, one of which is to explain how this supposed primeval explosion could be the cause of the complexity and organization of the vast cosmos, and another of which is to explain how a uniform explosion could generate a heterogeneous (diverse) universe. Creationists have stressed these problems, but now evolutionists themselves recognize them:

There is no mechanism known as yet that would allow the Universe to begin in an arbitrary state and then evolve to its present highly ordered state.2

The cosmological question arises from cosmologists’ habit of assuming that the universe is homogeneous. Homogeneity is known to be violated on the small scale by such things as galaxies and ordinary clusters, but cosmologists held out for a large-scale over-all homogeneity. Now if a supercluster can extend halfway around the sky, there doesn’t seem too much room left to look for homogeneity.3

There are many other difficulties with the Big Bang model,4 but evolutionary cosmologists have had nothing better to offer, especially since the abandonment of the rival steady-state theory.

There are many other difficulties with the Big Bang model

Sir Fred Hoyle, outstanding astronomer and cosmologist, also showed that the Big Bang theory should be abandoned for still other reasons.

As a result of all this, the main efforts of investigators have been in papering over holes in the big bang theory, to build up an idea that has become ever more complex and cumbersome....I have little hesitation in saying that a sickly pall now hangs over the big bang theory. When a pattern of facts become set against a theory, experience shows that the theory rarely recovers.5

To overcome some of the difficulties of the Big Bang theory, an amazing concept was promoted—the “inflationary universe.” This is strictly a mathematical construct, impossible even to visualize and likely impossible to test, but its advocates claimed it can resolve the problems posed by the initial stages of the Big Bang. Its essentials are outlined in the following remarkable scenario:

Our present understanding now leads us to the belief that sometime around 10-35 second the rate of expansion underwent a dramatic, albeit temporary, increase, to which we apply the term inflation. The physical processes that took place during the unification of the strong force with the others caused the universe to expand from a size much smaller than a single proton to something approximately the size of a grapefruit in about 10-35 second.6

Now, 10-35 second is one hundred millionth of a billionth of a billionth of a billionth of a second, whatever that can possibly mean. These inflationary cosmogonists are telling us that at the beginning, the entire universe (of space, time, and matter) was somehow concentrated as an infinitesimal particle, with all force systems (gravity, electromagnetic, nuclear, and weak forces) unified as a single type of force. This “universe” somehow went through an inconceivably rapid inflationary stage, reaching grapefruit size in 10-35 second, by which time the four forces had become separate forces, the heterogeneities had been generated that would eventually become expressed in the heterogeneous nature of the expanded universe, and the universe was ready to enter the “normal” phase of its Big Bang. Thus, as Tryon says:

In this scenario, the “hot big bang” was preceded by a “cold big whoosh.”7

To comprehend the arguments behind this inflationary model of the early cosmos, one would require a background in advanced mathematical physics, and not even those who have such a background all accept the model. As the very title of Don Page’s previously cited article states, inflation does not explain time asymmetry. That is, it still contradicts the principle of increasing entropy, or disorder.

The time asymmetry of the universe is expressed by the second law of thermodynamics, that entropy increases with time as order is transformed into disorder. The mystery is not that an ordered state should become disordered but that the early universe was in a highly ordered state.8

Many have speculated that the universe as a whole has been eternally oscillating back and forth so that the inferred infinitesimally sized beginning of the expanding universe was merely the hypothetical end result of a previously contracting universe. But this strange notion is clearly not a solution to the entropy problem.

We now appreciate that, because of the huge entropy generated in our Universe, far from oscillating, a closed universe can only go through one cycle of expansion and contraction. Whether closed or open, reversing or monotonically expanding, the severely irreversible phase transitions transpiring give the universe a definite beginning, middle and end.9

In fact, physicist S. A. Bludman made the following fascinating comment:

Finally, we show that if space is closed and the Universe began with low entropy, then it had to begin, not with a big bang, but with a nonsingular tepid little bang.10

If the universe is “open,” then its inferred expansion should go on forever, but if it is closed and eventually begins to fold back in on itself, then it could not ever bounce back again. It would end in a “final crunch.”

Which brings our discussion back to the singular beginning postulated by the inflationary model. Where did the initial “point universe” come from? This amazing infinitesimal particle that contained the entire universe and, in principle, all its future galaxies, planets, and people—how do we account for it? If one thinks that the scenario up to this point has been enchantingly preposterous, one will surely think the rest of it is simply a creationist plot to make evolutionists look ridiculous. Readers should certainly check this out for themselves!

“In the beginning God created the heavens and the earth.”

How did it all come to pass? Edward Tryon, who started much of these metaphysical exercises in 1973, said:

So I conjectured that our Universe had its physical origin as a quantum fluctuation of some pre-existing true vacuum, or state of nothingness.11

So, our vast, complex cosmos began as a point of something or other that evolved as a fluctuation from a state of nothingness!

In this picture, the universe came into existence as a fluctuation in the quantum-mechanical vacuum. Such a hypothesis leads to a view of creation in which the entire universe is an accident. In Tryon’s words, “Our universe is simply one of those things which happen from time to time.”12

Lest any readers begin to wonder, this discussion is not intended as a satire.

Lest any readers begin to wonder, this discussion is not intended as a satire. It is a straightforward recital of what modern astrophysical cosmogonists have proposed as the beginning of our universe. Alan Guth and Paul Steinhardt said:

From a historical point of view probably the most revolutionary aspect of the inflationary model is the notion that all the matter and energy in the observable universe may have emerged from almost nothing….The inflationary model of the universe provides a possible mechanism by which the observed universe could have evolved from an infinitesimal region. It is then tempting to go one step further and speculate that the entire universe evolved from literally nothing.13

Regardless of the sophisticated mathematical apparatus leading the inflationary-universe cosmogonists to their remarkable statement of faith in the omnipotence of nothingness, there will continue to be a few realists who prefer the creationist alternative: “In the beginning God created the heavens and the earth.”

• Dr. Morris (1918-2006) earned his Ph.D. in engineering from the University of Minnesota and was head of the Civil Engineering Department at Virginia Polytechnic Institute before he founded the Institute for Creation Research. Dr. Morris wrote over 60 books. The Genesis Flood, co-written with Dr. John Whitcomb, was a primary catalyst for the creation movement.