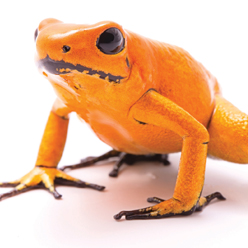 Found in Central and South America, the poison dart frog uses its skin toxin for defense and its bright colors as a warning. Each tiny amphibian holds enough toxin in its skin to kill 10 people.1 Its popular name came from native hunters who very carefully dipped the tips of their hunting darts in the frog’s poison. A new study revealed how the frogs survive their own poison, and the answer points to God.

Each tiny amphibian holds enough toxin in its skin to kill 10 people.

Over 150 years ago, Charles Darwin asserted that nature could select enough traits over time to change one animal kind into another. Could natural processes have accidentally constructed poison dart frogs step by step? If nature’s first step was to make the frog’s toxin, then what would stop that first batch of toxin from immediately killing the frog, thus ending its imaginary evolution?

Perhaps the frog developed immunity to the toxin first, and its sophisticated biochemical toxin production facilities emerged later so that the toxin could evolve without killing the frog. Does this sound reasonable?2 Two big problems confront that idea.

A new study revealed how the frogs survive their own poison, and the answer points to God.

First, natural processes do not anticipate future needs or desires. Nature never said, “Hmm, if I could just invent a toxin, it could be useful for future froggy defense.”

The second problem reaches into the newly discovered details of poison frog immunity. Its toxin works by docking with a specific module of a sodium gate protein found on the outer surfaces of nerve and muscle cells. The toxin targets a module that has 1,836 amino acids, each precisely in its place like so many miniature engine components.3 The docked toxin blocks the victim’s sodium gates from sending vital signals. This freezes muscle cells, thereby stopping the heart. Only when scientists changed the 1,584th amino acid found in most animals (asparagine) to the amino acid that the poison frogs have at that spot (threonine) did the toxin fail to dock. Rats with the frog’s version of this protein survived exposure to the toxin just fine.4

Natural processes do not anticipate future needs or desires.

What are the odds that natural processes would have somehow specified that exact amino acid swap at that exact position, then spread this new version across all poison dart frog ancestors, all before the toxin ever became a glimmer in Mother Nature’s imaginary eye?

In other words, which came first, the toxin or the frog’s immunity to its own toxin?

A powerful Creator like the One the Bible describes would not have to build animals in steps. He could have created each original animal all at once, like Genesis says He did, to avoid all the “which part came first” problems.5 Plus, a wise Creator could (and a good Creator would) equip creatures with suitable solutions to needs He actually anticipated.

One may ask why a good God would create harmful toxins at all. Well, in addition to protecting creatures, toxins can become medicines when used in measured doses and specific applications.6 The Lord’s wisdom, “beside Him as a master craftsman”7 from the beginning, anticipated both our research and possible medical interests and these frogs’ needs when He—not nature—designed their toxic skin.