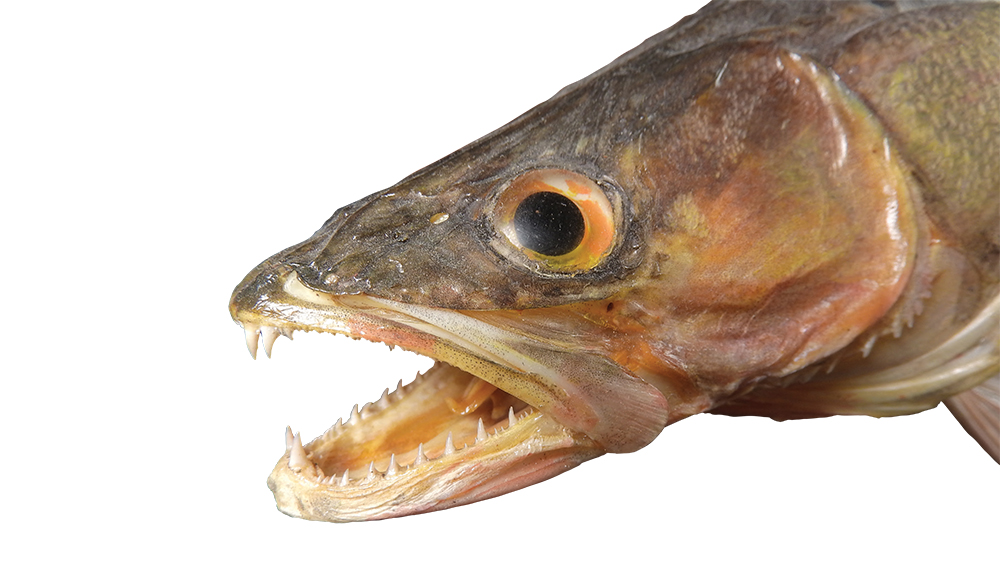 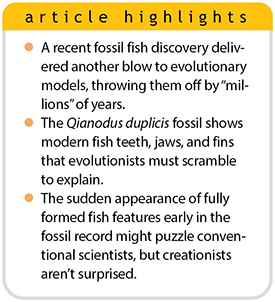 Once again, research into the fossil record has provided evidence that a creature “originated far earlier than previously believed”— in this case, ray- and lobe-finned fish (osteichthyans). According to a report in Nature, a new species of a jawed vertebrate (Qianodus duplicis) showed up “439 million years ago” in the Silurian period.1 And evolutionary models must again be reshuffled to keep up with the constantly changing timelines.

University of Birmingham paleobiologist Ivan Sansom, a co-author of the Nature study, said, “This puts into question the current evolutionary models for the emergence of key vertebrate innovations such as teeth, jaws, and paired appendages.”1 The creation model states paired appendages, jaws, and teeth were created fully functional during the creation week thousands of years ago. Oddly enough, this model doesn’t need to change because of the new discovery.

Scientists are interested in Qianodus for several reasons. One, it “possessed unusual spiral-like dental elements carrying several generations of teeth that were inserted throughout the course of the animal’s life.”1 These spirals—called whorls—are tiny and have altered scientists’ beliefs about the evolution of vertebrates. Two, “the discovery indicates that the well-known jawed vertebrate groups from the so-called ‘Age of Fishes’ (420 to 460 million years ago) were already established some 20 million years earlier.”1

The Nature study authors wrote that “the whorls possess non-shedding teeth arranged in a pair of rows that demonstrate a number of features found in modern gnathostome [jawed vertebrates including rays and sharks] groups.”2 This is indeed a fascinating discovery of a number of features found in today’s jawed vertebrates. Tired evolutionary explanations continue to crumble with complex fossil discoveries in sediments that approach an alleged age of a half-billion years ago.

The development of teeth varies among God’s created kinds and species, and is exceedingly complex. Tooth development (odontogenesis) has intricate developmental signaling centers to direct tooth morphogenesis via signaling pathways. Indeed, “it is no longer legitimate to investigate the evolution of the jaws and teeth without considering the operational processes which affect and control the developmental cascade [the numerous transaction and interactions occurring in developing systems].”3

In fish, the expression of Hox genes (genes involved in the development of the basic body plan) controls mechanisms for tooth initiation. The genes affect numerous groups of teeth simultaneously. Where did Hox genes come from? “The evolution of these genes within [vertebrates] remains largely obscure because of the incompletely resolved phylogenetic [evolutionary] history of these genes.”4

Don Moeller, an oral surgeon and medical doctor, addressed dental fossils (e.g., Qianodus duplicis), developmental biology, and their significance in regard to the origins issue.

It is no longer enough to simply view a fossil as a static component of a phylogeny constructed largely on only morphological aspects. Developmental biology views the fossil as the end product of a long sequence of highly complex regulated processes which when subjected to mutational processes will exhibit perturbations in the system. The essential question when evaluating the fossil evidence will be: does the fossil record demonstrate evidence for the gradual establishment of the numerous developmental and regulatory developmental sequences, or does the fossil evidence support the sudden appearance of numerous complex forms which have already established developmental sequences?3