Reconciling Two Different Calculations of the Hubble Constant | The Institute for Creation Research
Skip to main content
NEWS     CREATION SCIENCE UPDATE     THE UNIVERSE IS STABLE     THE UNIVERSE WAS CREATED     ASTRONOMY     PHYSICS     CONTRASTING WORLDVIEWS     SCIENCE
Reconciling Two Different Calculations of the Hubble Constant
BY VERNON R. CUPPS, PH.D. *  |
MONDAY, FEBRUARY 15, 2021
An interesting article1 on physics.org caught my attention. Its title is “Solved: The Mystery of the Expansion of the Universe.” But this can be misleading. The material covered really does not solve the problem of how the universe purportedly came to be expanding in the first place.2 However, it does attempt to solve a computational difference between two different methods of calculating an important number in cosmology called the Hubble constant (H0).

So, what is the Hubble constant, and why is it important to Big Bang cosmologists? It’s the ratio of the speed of recession of a galaxy to its distance from an observer—in this case, us. If an object moves a distance of d through space at a velocity of v, then H0 would be defined as H0 = v/d. H0 is thought to give the expansion rate of the universe. Its reciprocal (in units of time) is thought to give a rough estimate of the age of the universe, according to Big Bang reckoning. 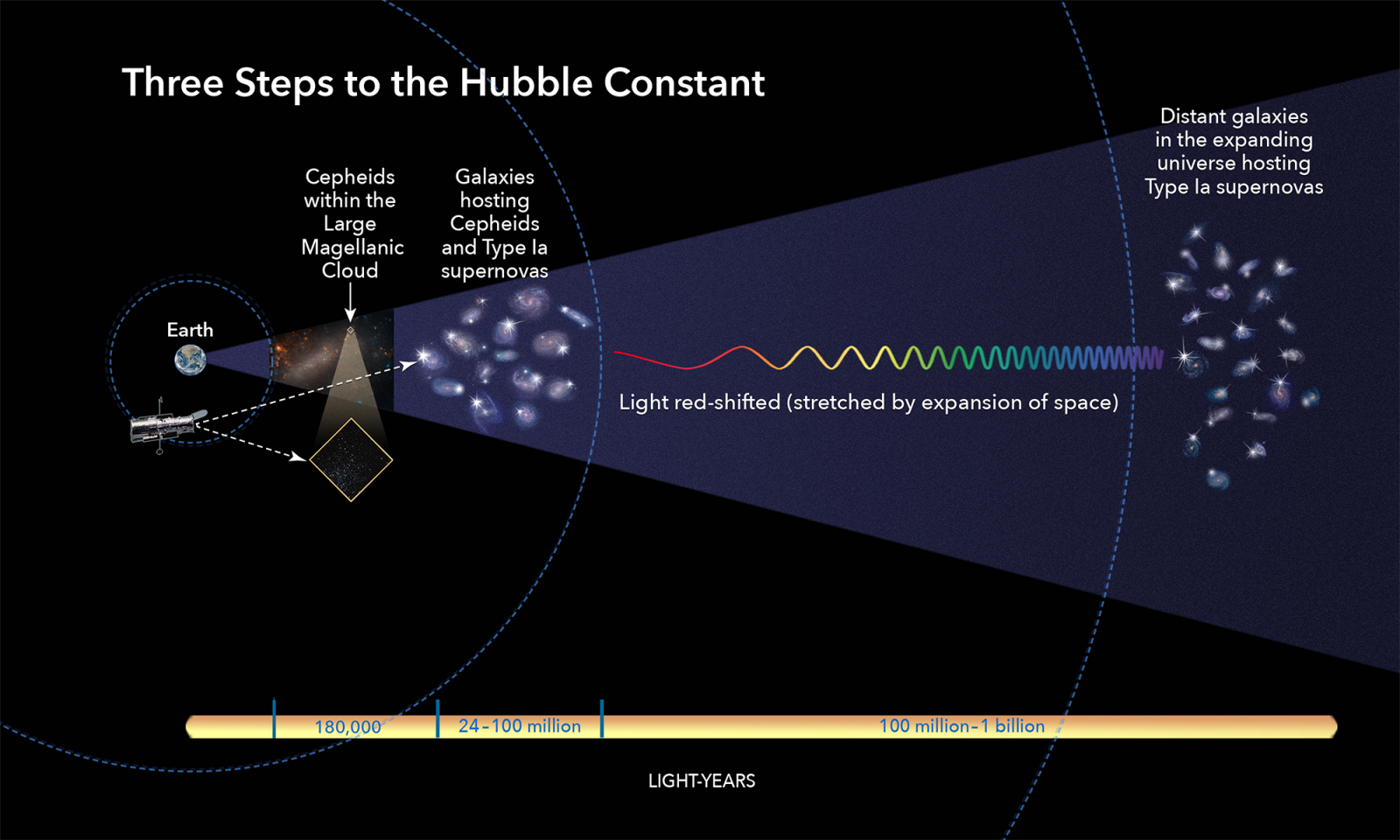 Image credit: NASA, ESA and A. Feild (STScI). Adapted for use in accordance with federal copyright (fair use doctrine) law. Usage by ICR does not imply endorsement of copyright holders.

However, two different ways to measure H0 have produced conflicting results in the past. The first method assumes that the Cosmic Microwave Background (CMB) radiation is an afterglow from a time about 400,000 years after the Big Bang. Given this assumption, cosmologists find the values of important cosmological parameters, including the Hubble constant, that give the best overall fit to the CMB data. Using the precise data supplied by the Planck space mission, and making the usual Big Bang assumptions, a value of 67.4 kilometers/second per megaparsec3 is obtained for H0 with this measurement method.

The second method used supernovae found in distant galaxies to measure H0. The redshift of the supernova spectrum provides an estimate of its recession speed. Its distance from us can be estimated by using both its apparent and intrinsic brightness. Measurements of 70 Cepheid variable stars within the Large Magellanic Cloud have been used more recently to establish the distances to such galaxies.5 This method provides a value for H0 of 74 kilometers/second per megaparsec. The two estimates disagree, as the uncertainties in the two numbers do not overlap.

Seeing this disagreement, Professor Lombriser at the University of Geneva was motivated to provide a hypothesis4 that might solve the discrepancies between them. He postulated that if the average mass density inside a bubble of approximately 250 million light-years was 50% lower than the rest of the universe, then the two methods could be brought into agreement. However, it is not clear why the matter density within such a bubble enclosing the Milky Way and Andromeda galaxies should have a 50% lower average density than the rest of the universe. And even if it were true, how do we know that other such bubbles don’t exist? And how do we know that some of these bubbles aren’t extremely large? If very large bubbles did exist, then this would negate the assumption of large-scale homogeneity, which is a foundational concept in the Big Bang hypothesis. Indeed, at least one such bubble has already been reported, potentially challenging this fundamental Big Bang assumption.6

The Big Bang as it is currently understood cannot explain the matter-antimatter imbalance.7 It also appears to contradict the first law of thermodynamics, conservation of energy, as well as the second law, the law of increasing entropy.8, 9 No one should be surprised that the Big Bang yields contradictory results, as the model is both unbiblical and has some serious unresolved scientific issues.

Stage image credit: NASA. Adapted for use in accordance with federal copyright (fair use doctrine) law. Usage by ICR does not imply endorsement of copyright holders.

References
1. University of Geneva. 2020. Solved: The mystery of the expansion of the universe. Physics.org. Posted March 10, 2020 at phys.org, accessed March 10, 2020.
2. Some creation scientists question whether the inference of an expanding universe is even a correct interpretation of the astronomical data.
3. A megaparsec is a distance of 3.26 million light-years.
4. Lombriser, L. 2020. Consistency of the Local Hubble Constant with the Cosmic Microwave Background. Physics Letters B. 803(135303): 1-6.
5. Hebert, J. Big Bang Hubble Contradiction Confirmed. Creation Science Update. Posted May 16, 2019 at ICR.org, accessed April 1, 2020.
6. Hebert, J. A Cosmic ‘Supervoid’ vs. the Big Bang. Creation Science Update. Posted May 7, 2015 at ICR.org, accessed April 2, 2020.
7. Cupps, V. 2018. Baryon Conservation and the Antimatter Mystery. Acts & Facts 47 (11).
8. Secular scientists claim that a Big Bang doesn’t violate the first law, conservation of energy. This is because they say the total energy of the universe might (!) be zero—but then again it might not be. Also, they sometimes claim the Big Bang can produce a universe from literally nothing, but this depends on a very doubtful understanding of a rule in physics called the Heisenberg Uncertainty Principle. See Faulkner, D. Quantum Fluctuations May Kill Big Bang Evangelism. Answers in Genesis. Posted February 12, 2015 at answersingensis.org, accessed April 2, 2020.
9. Secular cosmologists claim that the Big Bang does not violate the second law, because the universe supposedly started out in a very orderly (low entropy) state, and its entropy has been increasing ever since. They admit that no one knows why this would be the case, but they speculate that perhaps this low starting value of entropy was achieved at the expense of an overall increase in the entropy of an alleged multiverse. Interestingly, there’s not a shred of proof that the multiverse even exists. See Did the Big Bang Break the Laws of Thermodynamics? with Sean Carroll. The Royal Institution. Posted on YouTube.com December 21, 2016.

* Dr. Vernon Cupps is Research Associate at the Institute for Creation Research and earned his Ph.D. in nuclear physics at Indiana University-Bloomington.
The Latest
NEWS   ACTS & FACTS   PODCASTS